The latest Skegness Pier Angling Club (SPAC) match was held earlier today from 10am till 2pm at Chapel Point. The match was for the Roy Parker Memorial Cup in memory of long time SPAC member Roy, who graced us with his presence for many of our matches in years gone by, usually in the company of his son Dave.

Grimsby ace Garry Hutson ran an open match from the same venue yesterday, which fished very poorly, with the winner catching a hound and a flounder for just over a metre. But today was a different day, with a different set of anglers, so expectations were high. Unfortunately, the turnout was a bit down on recent matches due to Club members fishing away, but nine adults and one junior still turned up to fish. 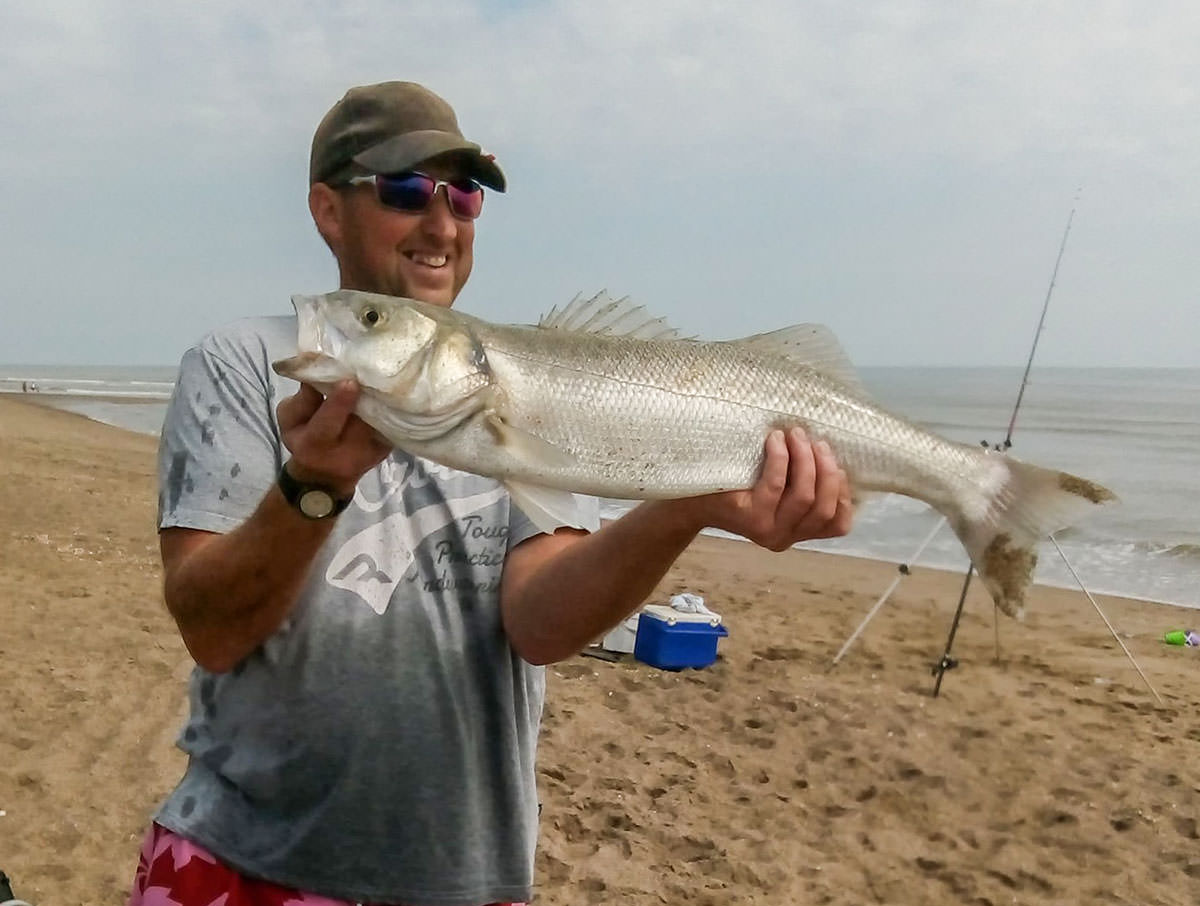 Conditions were perfect, with light winds, a calm sea and a bit of colour in the water. With the recent lack of hounds and in consideration of the ongoing explosion of bass from local shores, most opted to fish at close to medium range with either lug or rag on the hooks. This proved to be effective from the off, with the odd flounder and silver eel coming ashore along the match stretch. But Grimsby hound magnet Adie Cooper was having none of it and whacked out fresh peeler baited pennel rigs throughout the match.

Adie’s first fish was a nice 48cm bass, which eventually proved to be his smallest fish of the afternoon! He followed this up with an 81cm hound; then a massive slack liner resulted in a hook up with another weighty fish, which impersonated a hound until it came close to shore, where it turned into a magnificent 72cm bass!! The bass weighed in at 7lb 9oz before being returned quickly to the sea and is a personal best for Adie. He then went on to catch another four hounds, ending up with 522cm and an easy win. His best hound hit the measure at 92cm and also won Adie the longest round fish prize. 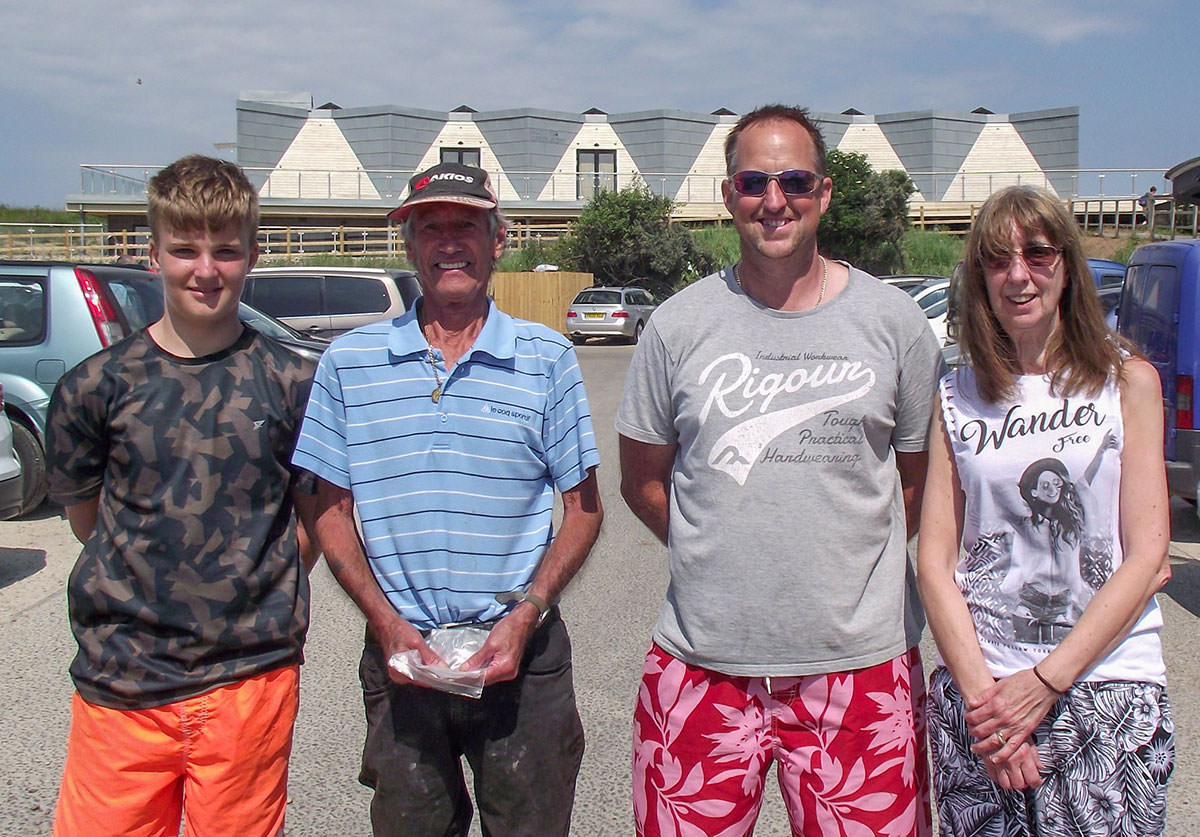 Gina with the top three, Adie, Bob and Tyler

South of Adie and fishing a deep hole at close range straight in front of the new North Sea Observatory, were Gary Collins and his son Tyler. Gary has been catching a lot of fish recently, but junior angler Tyler has been having a bit of a torrid time, with one or two blanks in recent matches. On this occasion however, it was Tyler who went home with the bragging rights. Fishing worm baited flappers, he caught from the off, ending up with three flounders, two dabs, a schoolie bass and a silver eel, to take second place with 189cm. This is the very first podium placing for Tyler since he joined SPAC, so a big “well done” young man, the first of many I hope! 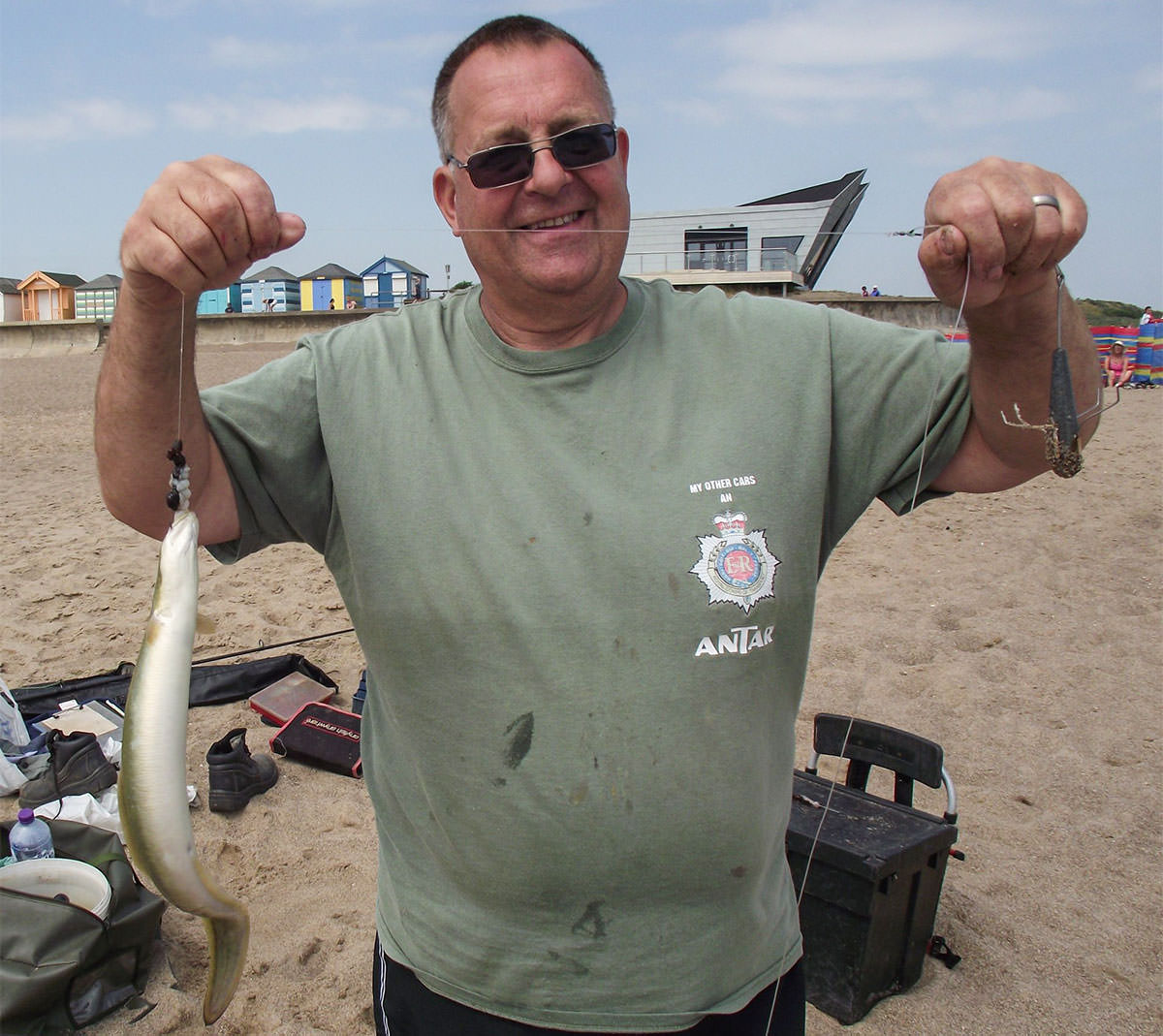 My mucker Russ Taylor, with his 53cm silver eel

“Angler not a Dangler” Bob Foster is in a good run of form at the moment and his first fish today was a fat 54cm silver eel. He then went on to catch four flounders, taking third place with 165cm. His best flounder measured 32cm and took the longest flatfish prize. Although out of the prizes, Russ Taylor fished well from just south of the Point, catching two flounders and a 53cm silver eel, to come in fourth place with 108cm.

After the match, Roy Parker’s widow Gina, came along to present the prizes to the winning anglers. She also brought hot and cold food along, which was enjoyed by all. Gina has done this every year since the inaugural memorial match and her efforts are always very much appreciated by everyone who fishes the annual match. Thank you Gina. 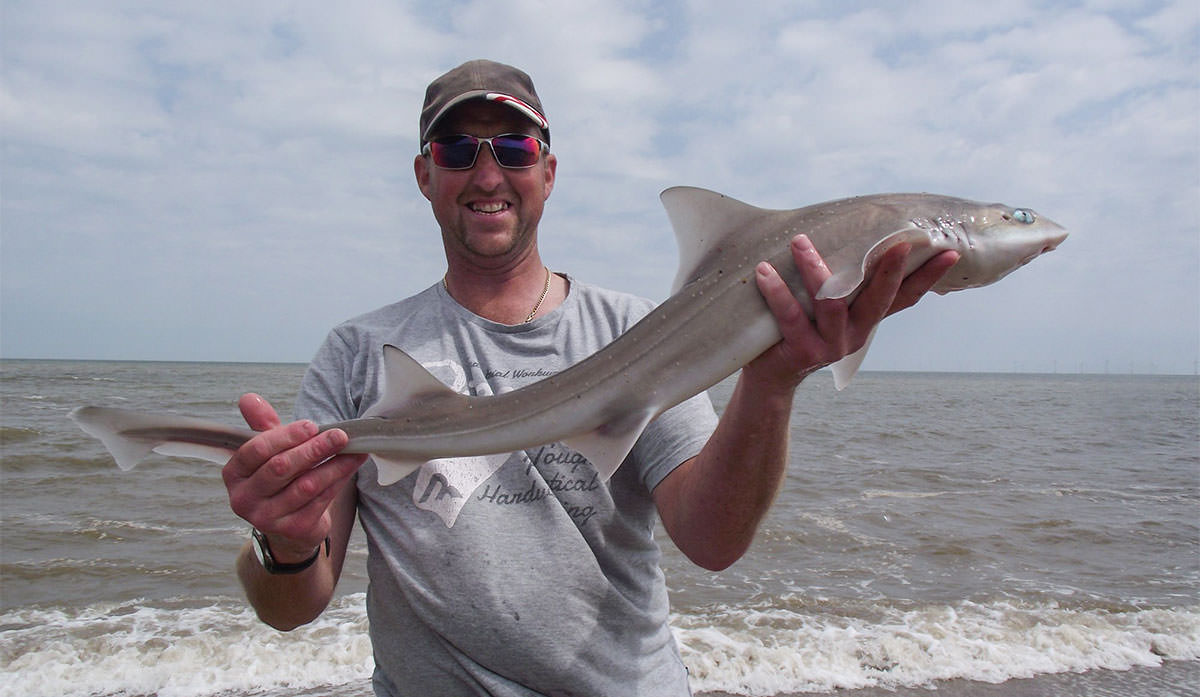 Hound magnet Adie with the longest round fish 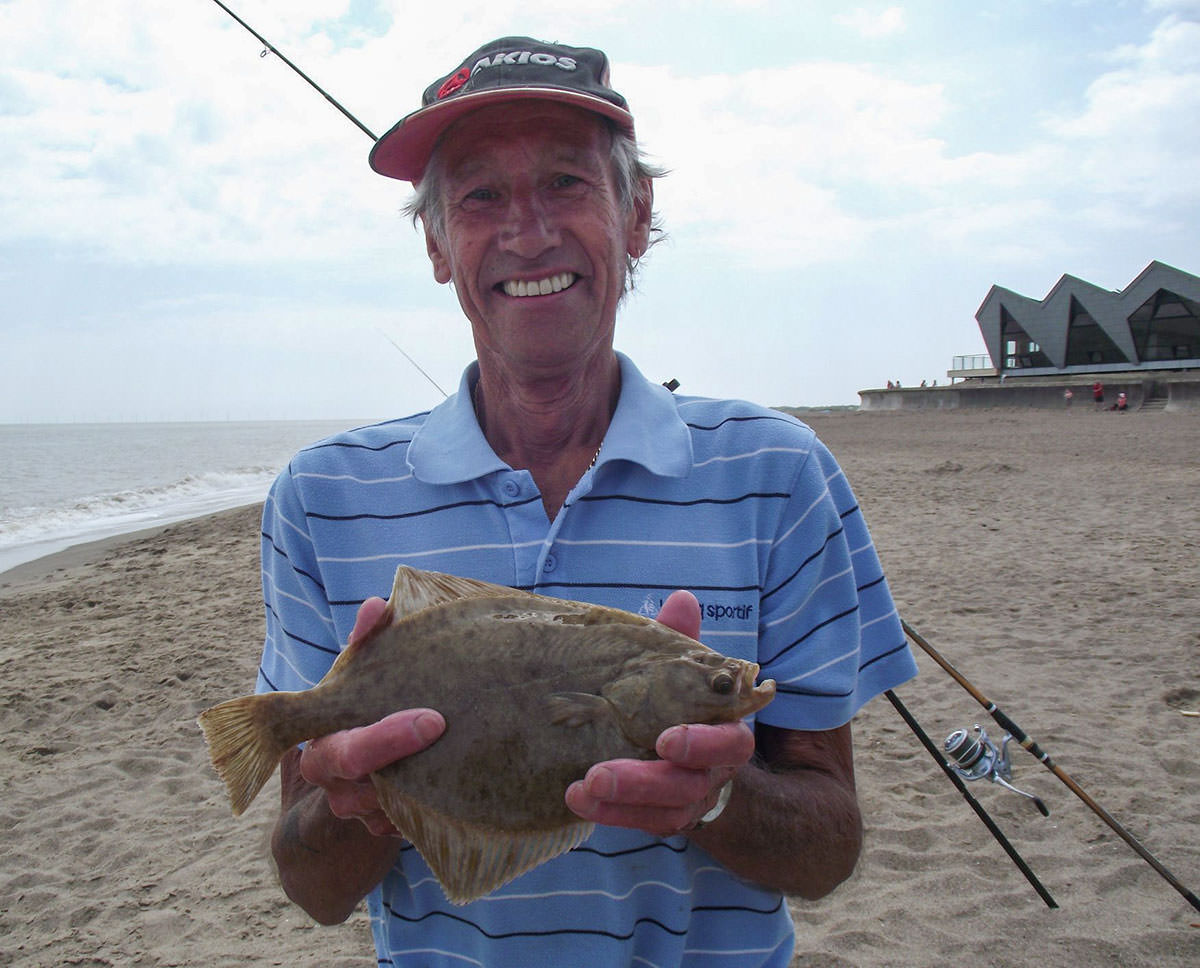 Next SPAC match is the ever popular Lincolnshire Pairs, which will be held on Saturday 21st July from 11:30am till 3:30pm at Drake Road. The match is open to all, but is for pairs only, so individual entries will not be accepted. It is a pegged event, with two Zones and the entry fee is £30 per pair. The match is being fished the day before Mark Taylor’s Smoothhound Open, so why not come along and make a weekend of it. Please pass on to those not on Facebook and please contact SPAC Secretary Chas Tibble on 07984 967988 or chastibble@hotmail.com for further details.