The fishing started a bit slow over the weekend with high temperatures, small tides, clear water and bright skies all hitting the sport. From Tuesday onwards the winds swung around to the west from the easterlies we have had for weeks. This brought colour back into the water and the fish inshore.

Multiple catches off bass and sole are being landed all along the coast with the smoothhounds also slowly starting to reappear. Plenty of tope pups have arrived too.

Ragworm again has been in a league of its own, catching almost everything. Black lug and yellow tails are preferred for bass and sole on small hook rigs and crab and rag for hounds fished at distance on 3/0 and above hooks. As the winds look likely to stay from the west this week we should see a fantastic time for fishing.

Pier member Tracey Wallis was one of those who found quality sole this week when she landed a fish of over 2lb. 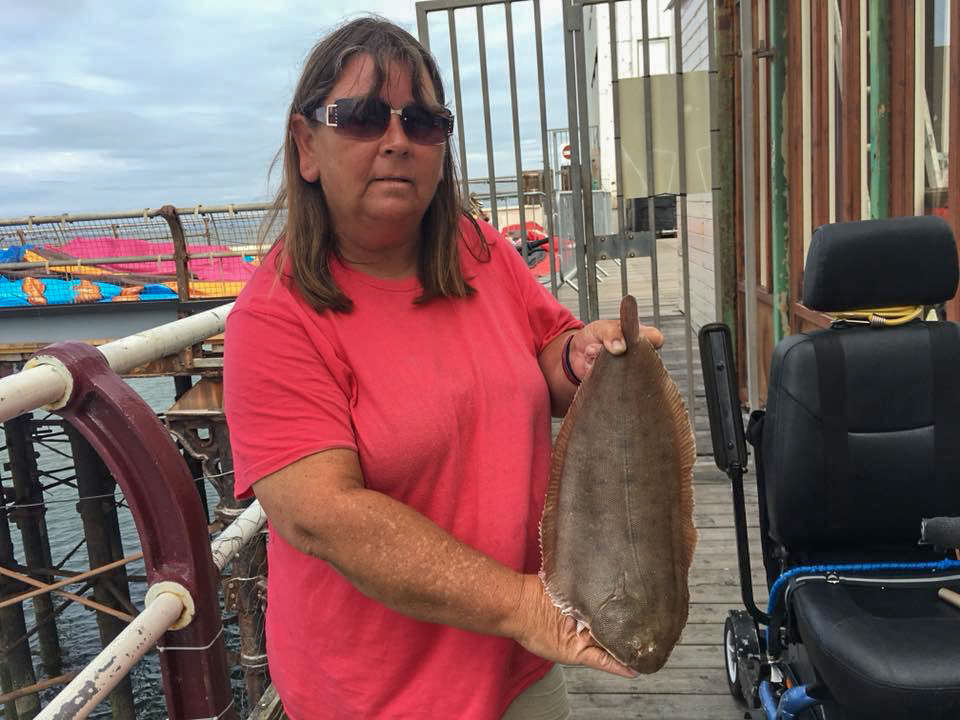 Tracey with her sole

Blackpool Federation SAC held its sixth match of the season on the 8th July 2018 at Fairhaven with fishing from 9:00 to 12:00, covering the ebb from two hours after high water. The match was fished to a one hook rule.

To say it was an unusual match for Fairhaven was an understatement with almost more tope pups being landed as flounder. The fishing was patchy with the key element being the anglers with fresh peeler crab out fishing everyone else.

Fleetwood and District Angling Club fished an evening match at Stanah. The hot settled weather made fishing difficult as the fish don’t seem to want to feed the same.

The lack of crab was a major factor in a lot of anglers blanking. You really needed crab to be in with a chance of getting a bite. The match was for the largest single flat fish.

Usually you are looking for a flounder around 39 or 40cm to be in with a chance. As it turned out a flounder of 37cm was enough to give Alan Smith the win. He was closely followed by Dave Wilson and Ray Rodger each with a 36cm flounder.

Best total catch on the day was Bob Egan with a creditable catch of twelve fish, flounders, eels and bass, for 100 points.

It was a good weekend for Alan Smith, he fished Gerry’s of Morecambe smoothhound match on Saturday and caught two plaice. Because not a single smoothie was landed he ended up with second and fifth heaviest fish, earning himself a couple of hundred pounds. With bigger tides next week, hopefully a few more fish for us on the Grim Wall.