Hailing from New Hampshire Dana Benner has been writing about fishing and the outdoors in the traditional press and digital media for more than 30 years. In his first feature for Planet Sea Fishing he takes us to the Cape Cod peninsula to target the renowned striped bass.

The Atlantic Ocean offers some great fishing opportunities along the New England coastline. While we are most famous for our cod fishing, this fishery is off limits in many areas in an effort to protect the remaining cod population which has been over fished. Just because the cod fishing is closed doesn’t mean that we aren’t still out there wetting a line. There are pollack, haddock and flounder; there are mackerel and bluefish, and then there are the famous striped bass.

Though the striped bass has been heavily fished as well as the cod, thanks to strict regulations, both federal and state, there are still fish to catch. In Massachusetts waters the angler is only allowed to keep one striped bass and it has to have a minimum length of 28 inches. I’d like to take this opportunity to tell you a bit about the striped bass fishing in the waters off Cape Cod, Massachusetts.

Even though I have been fishing in New England waters my entire life, this trip was a first for me in many ways and it was one that I will never forget. I was fishing with my friend David Bois and it was one of the best times afloat that I have ever had. While David owns a fishing guide service called Stripers-R-Us, this was a trip purely for fun, something he doesn’t often get to do. This was my first time ever fishing, freshwater or saltwater, in Massachusetts; in fact, it was my first time on Cape Cod, and it would prove to be my first time ever catching keeper stripers. 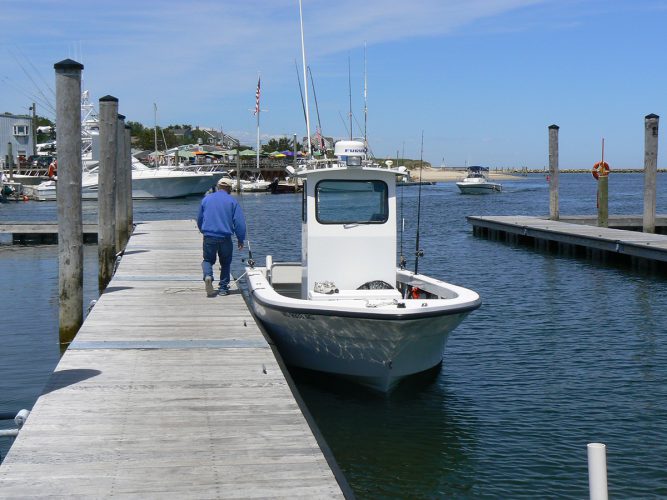 It was a Tuesday afternoon, in the beginning of June, when I jumped in my truck and made the three-hour drive from my home in New Hampshire. My destination was Cape Cod, specifically Yarmouth Port tucked in among the creeks and marshes at the base of the Cape hook. I was staying Tuesday night in Yarmouth Port and then heading to Sesuit Harbor in nearby Dennis early the next morning.

While I have caught stripers along both the Maine and New Hampshire coasts and have even fished for cod and haddock in these areas, I have never caught a striper over 26 inches. When David informed me that there were chances of catching some really big stripers and even some blues (bluefish) I jumped at the chance.

Meeting up with David and his friend, Jack at the dock, we were underway by 6:00am. Within 15 minutes of leaving Sesuit Harbor, David had the 24 foot, center console Romarine at our first area. Once on location Jack and David quickly rigged two Okuma Downrigger rods that were matched up with Okuma reels spooled with lead core line for trolling, David can supply all the tackle required.

These set ups were rigged with tube and worm rigs. A tube and worm rig is just as it sounds. An 18-20-inch length of stainless steel wire is threaded through a 12 to 14-inch piece of red plastic tubing. At one end of the wire is attached a 4/0 to 6/0 stainless circle hook. On the other end is a heavy saltwater barrel swivel, the free end being attached to the mainline. The hook is then baited with a sand worm.

Both David and Jack worked like well-oiled machines and the entire process took less than five minutes. As I had no clue what to do, and I probably would be in the way, so I let them do their thing. Once the baits were in the water we began trolling at about two to three miles per hour. Now it was a waiting game. 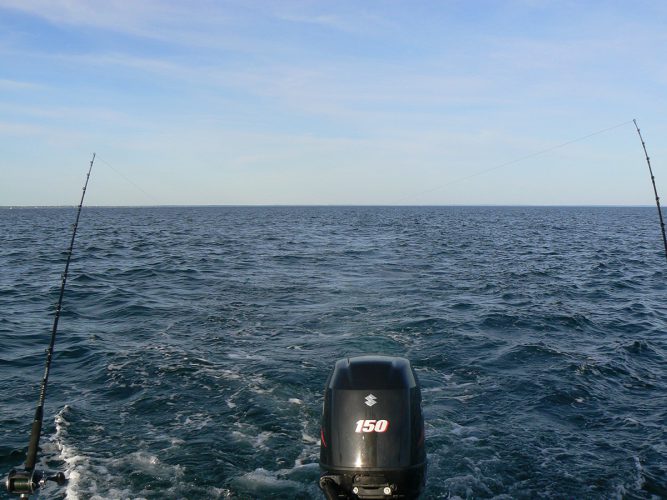 Both David and Jack were more than willing to share information with me. David is a native Cape Codder and has over 30 years’ experience in both commercial and recreational fishing. Jack, well Jack was a wealth of knowledge and he knows so much about striped bass fishing and the waters that we were fishing, that I personally think that he probably has gills. On this day we were doing in-shore fishing using light tackle so as we waited for the fish to start hitting our offerings, I took advantage of the lull to talk to David about pursuing a fish that can approach the 50-pound mark, using light tackle.

He explained to me that when you get a really large fish on you really need to finesse the fish in. Both men informed me that stripers relate to structure and for that reason we were concentrating on eight to 20 feet of water, running along the edges of the channels that feed the harbor.

A Hit on the Edges

My time was not totally spent staring at the rods waiting for a strike, nor speaking to the Captain about the finer points of stripers. As this was my first time to Cape Cod, I took a moment to admire the beauty of Cape Cod harbor. This is truly a special place and those who call this area home are very lucky people.

David hugged the edges, never deviating and it didn’t take long for us to see the tug, tug of the rod tip, indicating that there was a fish on the other end. I wanted to grab the rod and set the hook, but both men told me to wait. Let me tell you it was killing me. Then all of a sudden the rod bent over. Now we had a fish on. Taking the rod, setting the hook and keeping the rod tip up, the fish began taking line. When I had a chance, I started reeling, trying to gain line on the fish.

I did manage to gain a little before the fish made another run. David reminded me that we were using light tackle and cautioned me not to try to muscle the fish. If the fish wanted to run, just keep the rod tip up and let it run. I finally got the fish to the boat and come to find out it measured 31 inches; my very first keeper striped bass. 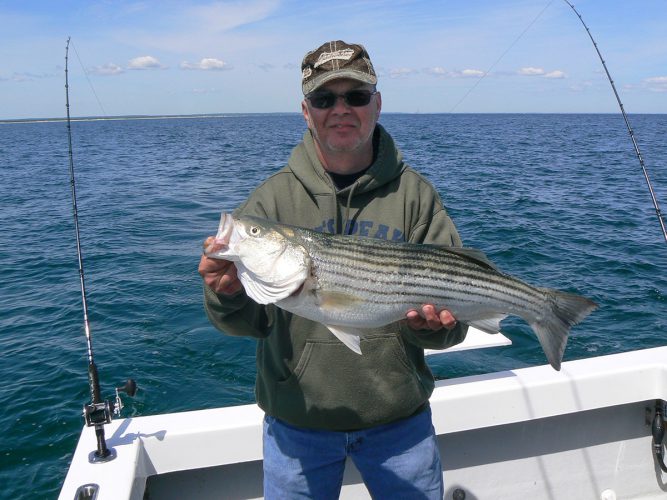 Our action didn’t stop there. Jack quickly baited up with another sea worm and rapidly had the line back into the water. We made another pass through the area and David rapidly yielded another keeper, this time a striper measuring 28½ inches. With these two fish in the cooler, the rest of the morning was just for pure fun. By 10:30am we decided to call it a day and head back to Dennis. Along the way we made one more stop, running the baits over some submerged structure hoping to pick up a couple of bluefish to add to the cooler.

All of a sudden both rods took hits. We had a double. Both fish were short stripers, under the legal 28 inch limit, and were quickly released. It was a great way to end the day. In all we caught seven striped bass with all being released except two, which David filleted for me to take home. By noon I was back on the road heading for home with a cooler of fillets and a lifetime of memories. 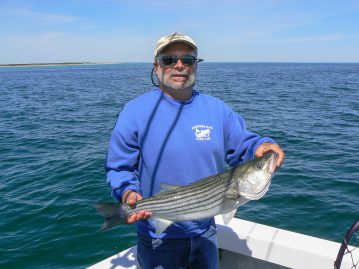 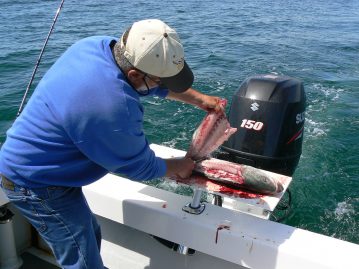 If you have never fished for stripers and you find yourself in New England, you owe it to yourself to team up with Captain David Bois and Stripers-R-Us. The experience, the stories and the knowledge alone is worth the price of admission. If you are new to striper fishing, this is the way to go.

You can contact Stripers-R-Us by calling +1 (508) 362-9195 or email them at Stripers-r-us@comcast.net. You can also visit their informative website to book and admire catches from previous outings.