Irish angling journalist Ashley Hayden reflects on a year of varying fortunes with rod and line in fresh and salt water.

December is both a time for reflection on the previous twelve months and also of anticipation for what the coming year will bring. Passionate about sea angling, I have to say 2011 proved a very good year indeed, taking me to some wonderful locations, yielding a variety of quality fish, allowing me the opportunity to meet like minded interesting people, and all done within the confines of a beautiful little country, Ireland. Yes we might be in the throes of recession, and there are way more important things to concentrate the mind than where the next specimen fish is coming from, but life goes on so we might as well make the most of it. We all need to recharge the batteries while reducing the stress levels, and what better way to do it then go fishing. 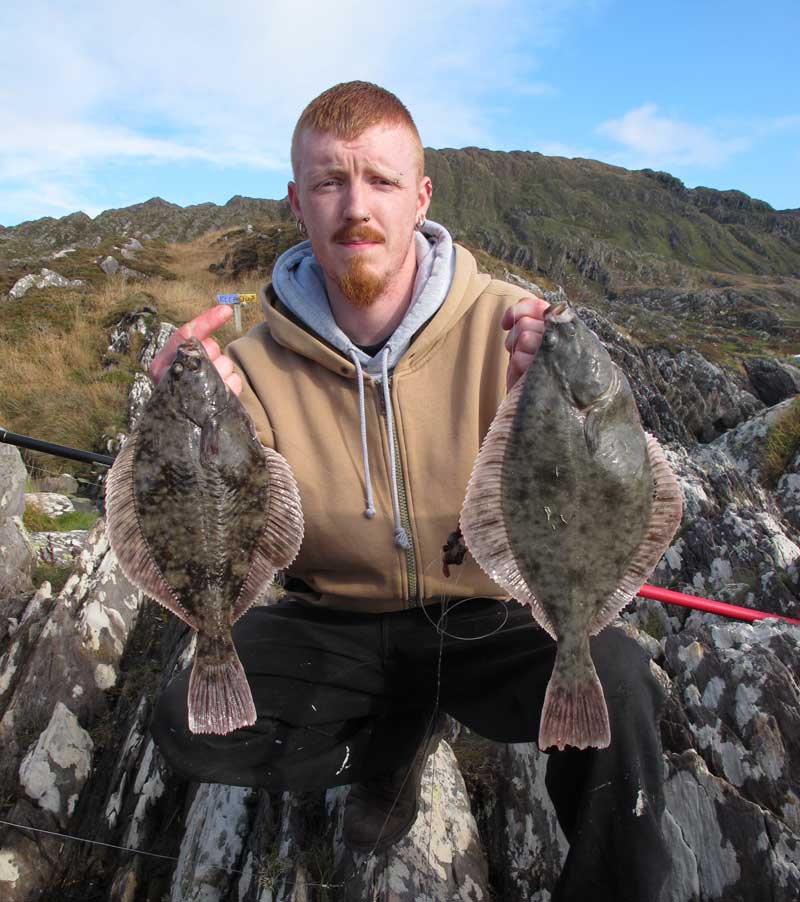 Ireland really does have a quality sea angling product with plenty of its best fishing opportunities still under the radar. In the last few years having returned to the sport after a decade away, I am amazed at the quality of fish that I have encountered. Yes the product is diminished and still under severe threat from bad management and overfishing, “the core reason why I gave up sea angling”, however since returning to the fold and by taking a methodical species led approach, my forays confined mainly to counties Wicklow, Wexford, and West Cork have been productive both in terms of species encountered and overall size.

A trip to Montana, in mid summer 2009 for a spot of wild trout fishing opened my eyes due mainly to the way that the Americans approach their sport. They think nothing of travelling to Alaska for steelheads, Florida for tarpon, and Wyoming/Montana for wild trout. In all cases the product is marketed in a more sophisticated, specific way, and most importantly the yanks break up their year travelling to fish relative to the key taking periods. Given that Ireland is only a quarter the size of Montana it made sense to apply a similar approach at home, with lo and behold satisfying results.

Sea fish caught or witnessed by me in 2011 were of a high average size with one or two being absolute monsters, Gerry Mitchell’s huge 60.lb plus Greystones tope standing out along with Denis O’Toole’s 16.lb Avoca sea trout. Throw in specimens of dab and mullet from the Beara, flounder from Wexford, shad from Carlow (sea fishing in fresh water, yes it can be done), smooth hound from Wicklow, partnered by a host of lesser brethren to include bull huss and pollack and one has to accept that Ireland really has a special resource. When I stop to consider that my story is just the experience of one angler, the mind boggles as to what the real picture is. 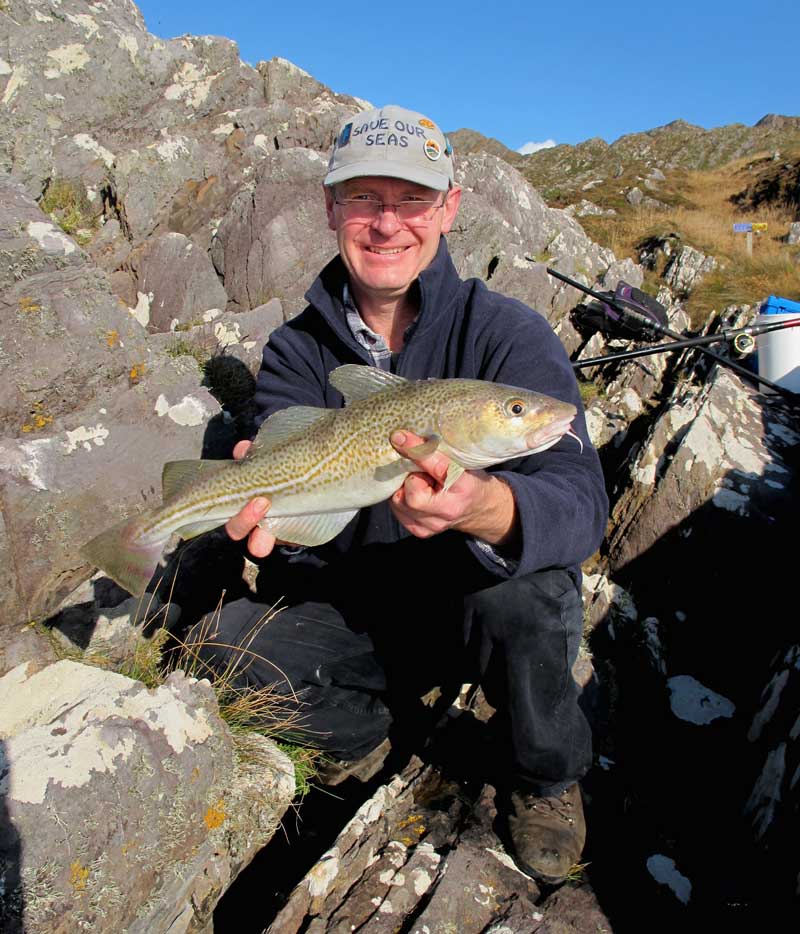 My sea angling starts in May and finishes the following January, for clarity I shall stay within the calendar year as bequeathed to us by Julius Caesar. Broken into its components January of 2011 was allocated to a spot of cod and flounder fishing. After a gap period to allow our fishy brethren to procreate, an early visit to St Mullins, Co. Carlow after the elusive shad kicked off the season, followed by a trip to the Beara peninsula. Late June was devoted to bass and smooth hound, while July to September became a quest for tope with the latter three months allocated to winter sea species in particular flounder, dab, and codling. In between the road took a few tangents with a mid November trip to the Beara added, but overall the game plan was set in late December 2010 before the first bait of the New Year was cast in earnest.

Finally released from a month of arctic conditions where snow lay deep on the ground and temperatures dropped to minus 14 degrees, I ventured out in early January to fish the beaches and estuaries of south Wexford. Two sessions stand out, casting my lug baited hooks into a rising tide west of Carnsore, as darkness closed in codling came on the feed partnered by some decent dabs and a flounder which well topped 45 cms. A week or two later on a blustery grey day fishing a prime estuary mark, a couple of lunker flounder sucked in my peeler baited kamazans. On their spawning run, fat and in excellent condition, after unhooking they definitely went forth and multiplied.

Late April into May provided the most consistent settled spell of weather for 2011, characterised by sunny days and light winds. Word came by bush telegraph from St Mullins that the shad were up, which was the catalyst for a number of visits to this magical location in south Co. Carlow. Annually like clockwork the migratory shad, a herring like fish related to tarpon, enter the river Barrow to spawn in gravel beds at the head of the tide. One bright morning at high water I witnessed Declan Roberts from Cork catch and release a whopper 1.3 kg specimen shad. Tempted by a Tasmanian devil (what else) the interesting aspect was that it was only the 20th of April, now that’s early. 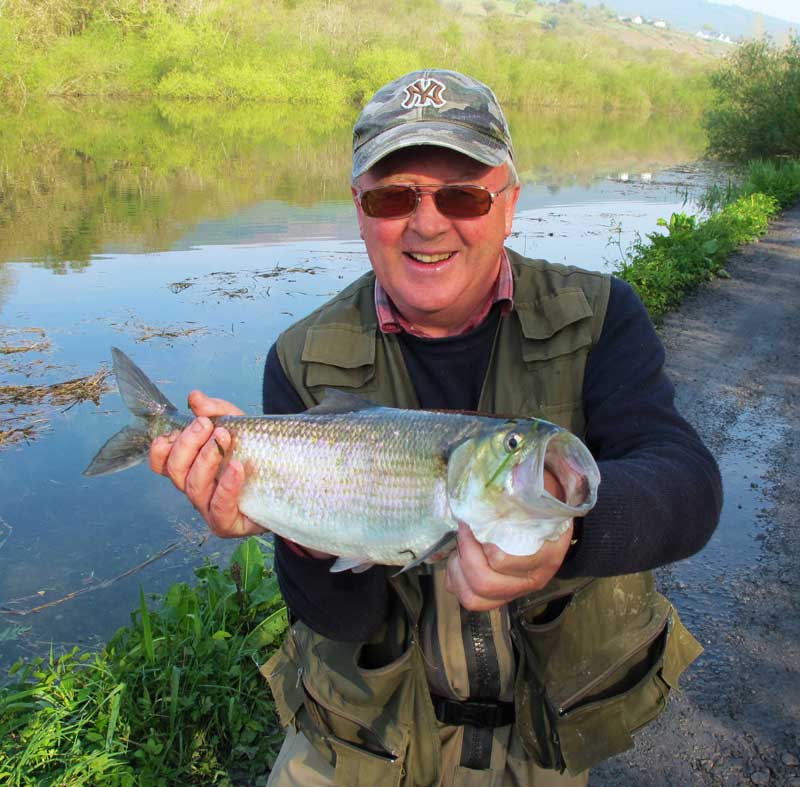 West Cork and the Beara Peninsula in particular are close to this anglers’ heart, I make the journey at least twice a year, 2011 being no exception meeting up with friend Roger Ball from the UK in late May, and also taking a long weekend in early November. Strong southerly winds became a constant from June and as I write in late December are still present. The Beara is a specimen and species hunters paradise, however to get the best out of it you need settled weather, 2011 tested the patience of all who travelled there. Playing the percentages while using accumulated knowledge and hunches, some fine catches were made over the two trips, with rough seas limiting the opportunities on both occasions. May saw some fine pound plus dabs, codling to 2.5 lbs, and a specimen mullet taken, while November surpassed even that with bass to 4.lbs, codling to 3.lbs plus, at least one specimen dab, and a fine double figure bull huss for friend David Murphy. 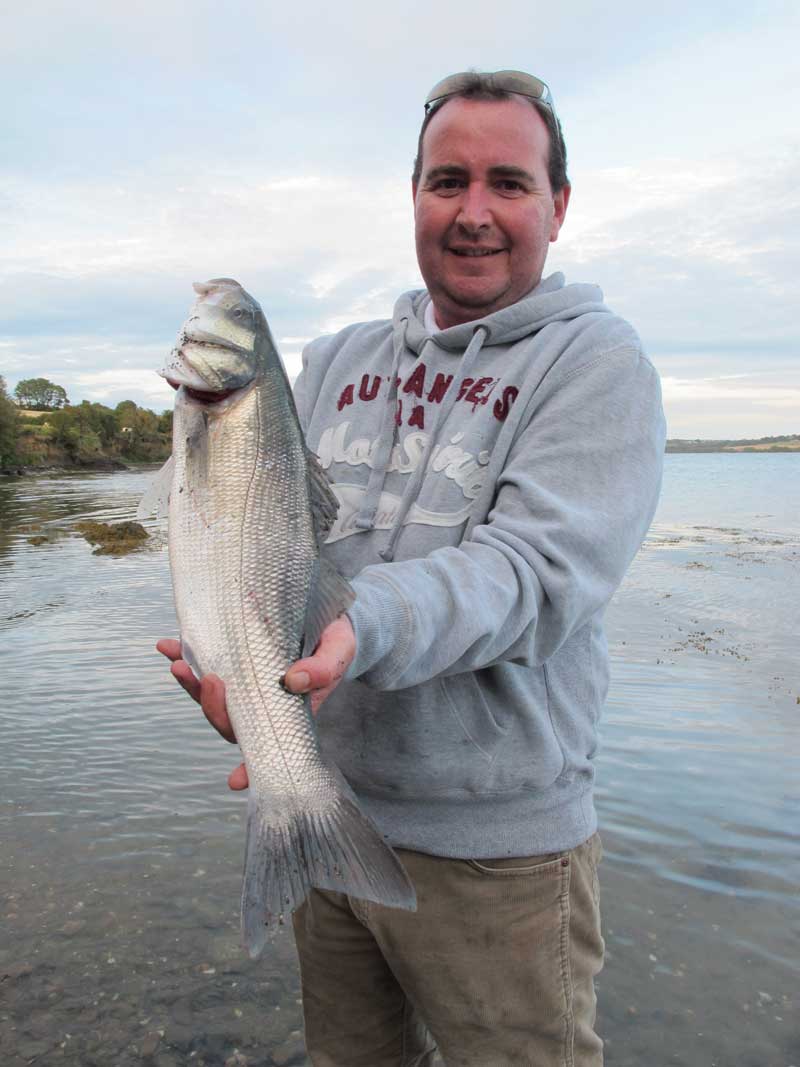 Bass for me were hard got this year which makes the few that did come my way all the sweeter. While local strands offered up their silver residents sparingly, in contrast smooth hound were plentiful, committing GBH to my surf gear on most occasions that I wet a line. Hauling rod tops over, dragging my number two rod out of the stand while playing its brother on number one, there were times when another pair of arms would have come in handy. What a cracking species, real sport fish, true greyhounds of the surf.

Mid summer saw good numbers of sea trout enter the River Slaney and I enjoyed a number of evenings fishing for this elusive but sporting fish. In a pool about a mile below Scarawalsh bridge I was working a team of flies consisting of a Kill Devil Spider on the point and a Butcher when a slight lean on the flies at the end of a run close to a weed bed became a munching sensation, unfamiliar to me I put two and two together pulling down on the fly line while in tandem lifting the rod. BANG, a boil within which showed a paddle of a tail, silver and black spotted, morphed into an unstoppable run across the Slaney. My line fizzed and the reel screamed, the fish obviously a big salmon had taken the butcher intended for sea trout. Five minutes later after numerous deep runs with my arm aching, the single handed rod inexplicably straightened from its previous hooped shape. Gutted, I’ll never know how the hook came out, but the power of that fish will remain with me forever.

Late summer became a tope quest off Greystones, Co. Wicklow, my 19’ lake boat being utilised when sea conditions allowed to reach some favoured predator marks east of the Moulditch, and down along the Kilcoole bank. Mackerel for the most part were scarce but Gary and I always managed to get enough for a days fishing. 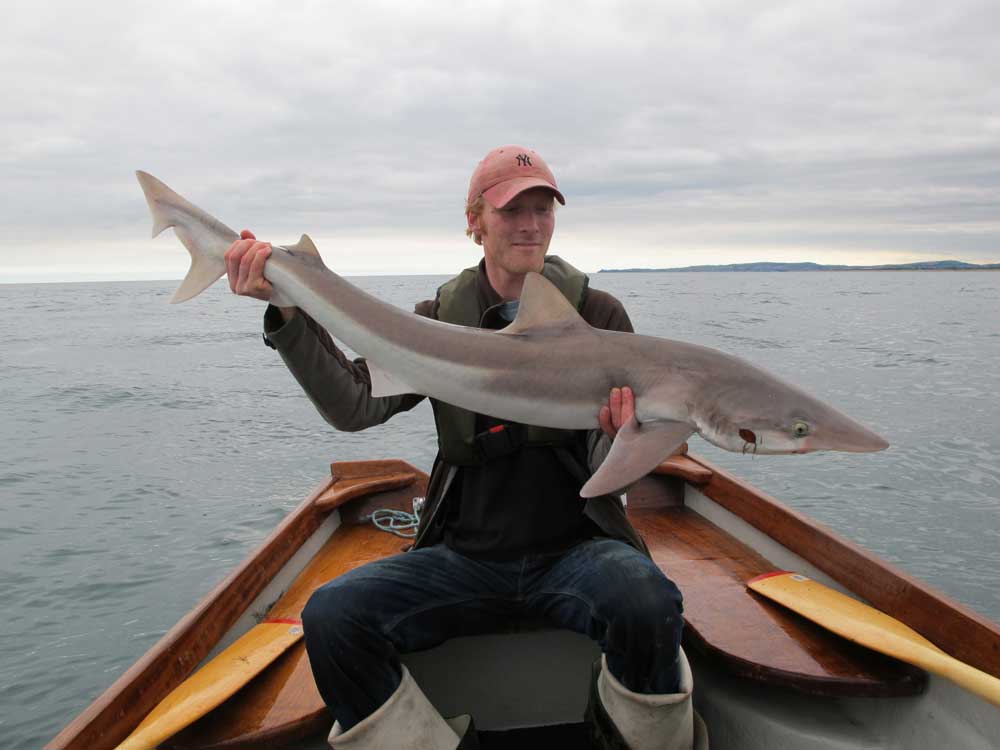 The target had been to land a tope on the Jean Anne before the end of August, and on a red letter 31st day of that very month we hit pay dirt with five fish to the boat from eight runs with one breaking the forty pound specimen weight. It was tremendous fishing, reels buzzing, long runs up and down tide, spells of inactivity only for fish to arrive out of nowhere, and that cracking specimen, well worth the celebratory pint of plain in the Beach House after. 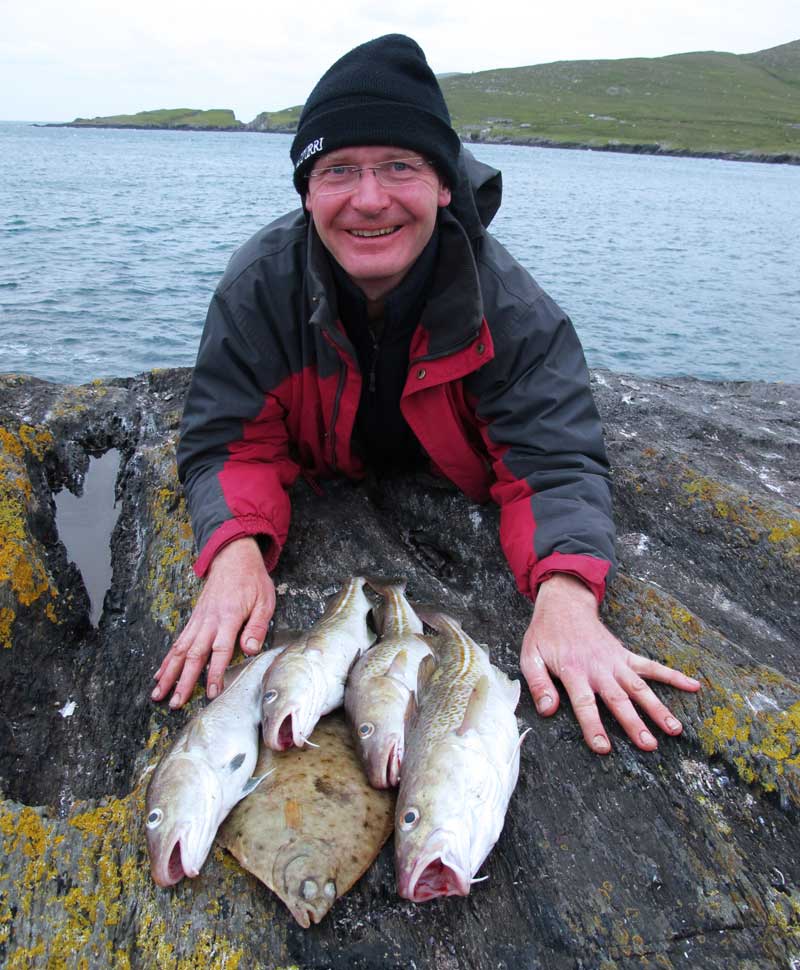 This brings us to the winter and a real possibility of reliving the old days given the amount of codling present off the south coast. Frank Flanagan from the Wexford based Menapia SAC enjoyed a fine session in mid October catching a haul of big codling from a local strand. Having opened my winter account with three two pound plus estuary flounder, I took Frank’s cue and headed for the south Wexford shingle banks. They did not disappoint, my first outing producing six species to include 3.lb plus codling and a mullet of all species tempted by lugworm, it must have been hungry.

So here we are in December, the year has flown, Ireland’s international soccer team are off to Poland/Ukraine, Michael D Higgins is Ireland’s new President, and the codling thank heaven are with us in force. Without doubt the best winter season that I have had in years, catches topping two dozen codling with some prime coalies thrown in. Applying catch and release where possible, I’ve still enjoyed some cracking fish suppers.

As I write the New Year plan has not really taken shape, although the Beara with Roger is a fixture come next May. The first two weeks in January will see me wrap up the season beach casting for Wexford codling, along with a flounder trip or two. St Mullins during April and May is pencilled in for the shad, and of course by late June I’ll be busting a gut to land a decent bass. My God it’s shaping up already, now what about those gilt head bream?

Ashley is an all round angler with a passion for sea fishing, he has developed and maintains the angling information and marine conservation website An Irish Anglers World, which highlights the superb sea angling available in Ireland’s sunny south east.