All eyes on Orkney

The European Boat Angling Championships comes to Orkney in the summer of 2015 and the cream of Europe’s anglers will be there. David Proudfoot knows the prolific Stromness venue intimately and here he reveals its competition fishing secrets.

The Orkney Islands might sound like a million miles away from civilisation but they are in fact only a short hop by ferry or air from mainland Scotland, and the sea fishing can be quite superb. Species variety is not kaleidoscopic, but what Orcadian waters lack in diversity is compensated for in the sheer volume of fish available. 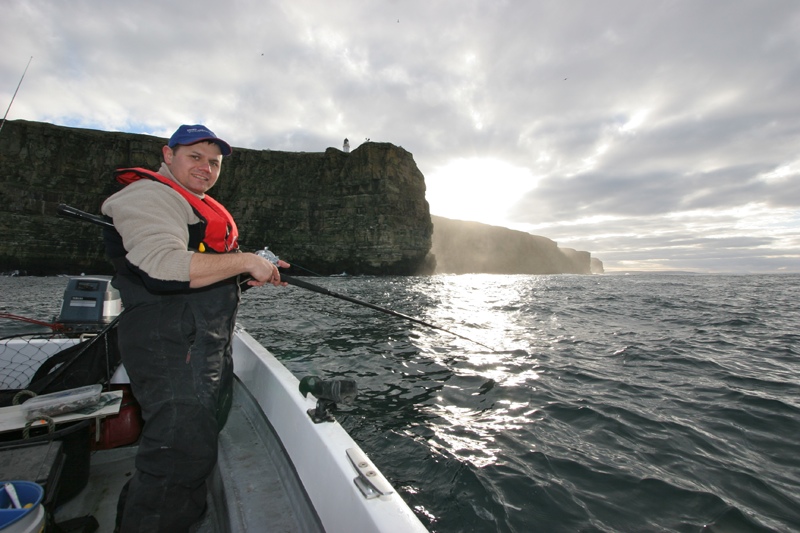 Stromness is the venue for the 2015 EFSA European boat and Light Class Championships. And with intense interest from all over Europe, it is only fair that we sort through the confusion of vague information, revealing instead what this event will entail, and what equipment travelling anglers will need to bring to make the best of the available fishing. Be aware that there is some real tripe on the web about what Orkney waters routinely offer anglers. Yes, there are indeed some big common skate, elusive halibut and migratory porbeagle sharks in cool these northern waters, but none of these species are on the competition angler’s radar. One website has tope, conger, turbot and brill as realistic targets, which should be dismissed as fantasy by any boat angler serious about being successful around Orkney within the confines of what the local charter boats and skippers do and know. The key to good Orkney results is playing the percentages. Fishing efforts should concentrate on actively targeting the volume species. Now at this point we do not know the actual rules or points breakdown with regard to species for next year’s Euro Champs, but we can detail those fish that will play the major part in how the event pans out. 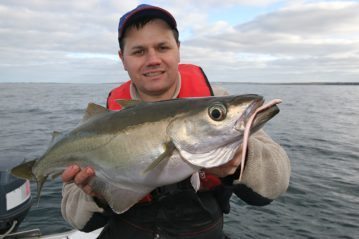 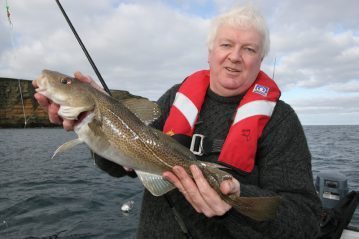 If you have fished out of Scrabster before Orkney holds few surprises as the fishing out of Stromness is very similar. The water is a little deeper and there are often huge numbers of fish. The main species will be cod, pollack and coalfish, with the possibility of some excellent ling fishing depending on where the boats are permitted to go. Ling fishing is a local speciality and it is possible to build some big bags of ling. However, bigger numbers of cod and pollack normally dictate that dedicated ling fishing is a secondary option. Incidental rough ground species would include ballan and cuckoo wrasse, with the possibility of spurdog, haddock, dab and gurnard from the areas of cleaner ground. These species are not expected to feature prominently, but you never know. All local fishing is done on the drift, generally over rock reefs that excel at snaring tackle and leads. Tackle loses go with the territory and travelling anglers need to ensure that they make provision for replacement leads etc. Some of the very best fishing is right underneath the cliffs and the impressive stack formations like the famous ‘Old man of Hoy’. 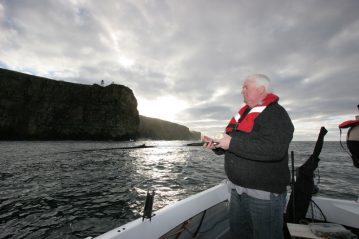 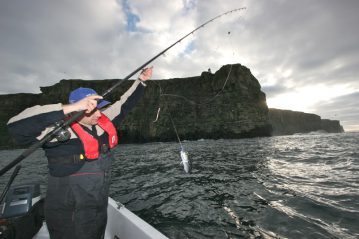 This rig can be fished with baits such as ragworm or mackerel strip but the normal ploy is to use lures and hold any worm baits bait for wrasse. Red Gills, jellyworms or Storm sandeels all work well. Red Gills are the best choice when there are big numbers of small coalfish on the ground, as these quickly destroy soft baits. The rig branches from a sliding plastic boom or fixed wire boom. I keep the trace quite short at around 8 feet, with the dropper tied in halfway along. However, some of the Orcadians and Shetlanders have great success using the same rig but twice as long. The pollack and cod here are not shy with many in the 4 – 8lb range. Step trace strength up to 30lb or even a little more, as double hook-ups are common. 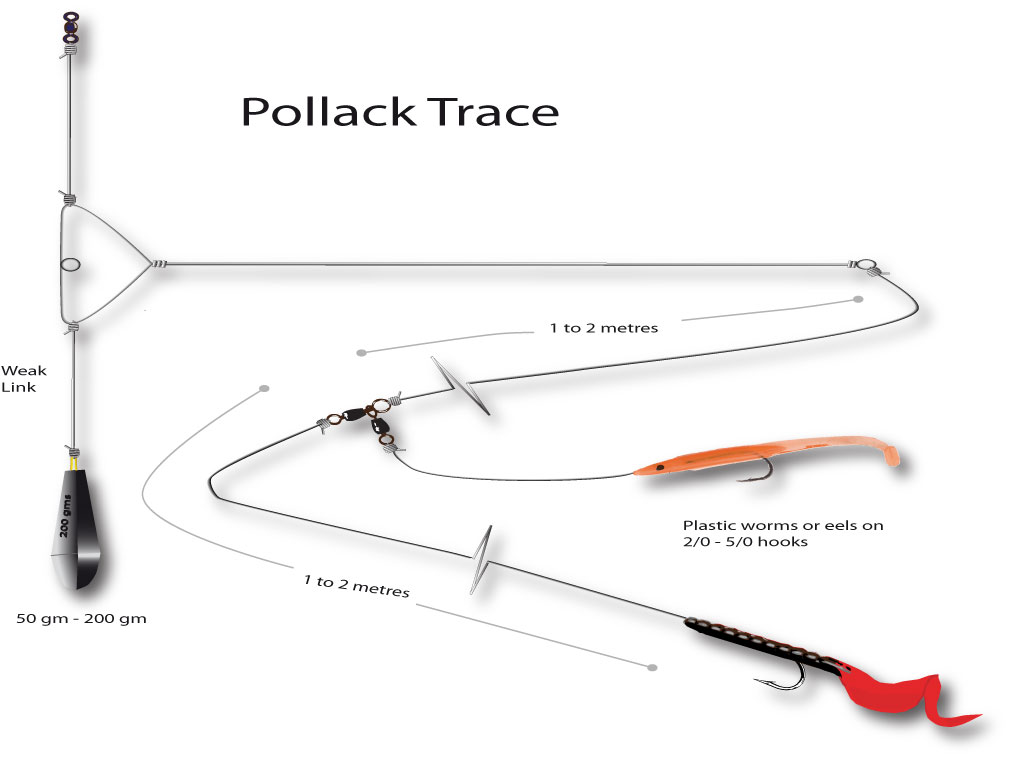 Pirk shape and design is a matter of personal preference, but very heavy pirks are unnecessary. The flier can be either an artificial eel such as a Red Gill, a muppet, jellyworm or Hokkai. This is an excellent ‘speed’ rig when there are plenty cod and pollack on the go. Don’t make the mistake of casting too far as this just wastes time. Orkney cod like to eat pirks, and most of the time, dropping straight down is the way to do it. I have never needed to use a pirk of more than 400g on these grounds, and often get way with 150g. Take a selection up to 400g. Work pirks/lures right up through the levels, as pollack and cod too are often taken well up.

This ugly looking wirework is specifically intended to catch ling but it also picks off cod. Shetland islanders invented this bent metal monstrosity and it can be devastating. It is basically a heavy-duty wire double spreader with arms of around 15ins. Flat-bar chrome spoons of 5 – 8 inches long are fixed directly to the arms via swivels and strong split rings. Hooks go on the other end of the bar spoons also via split rings. Muppets or pieces of coloured tubing can be added to the hooks for effect. There is no mono in the rig as such, other than perhaps a short piece between the top of the spreader and the linking swivel.

The idea here is to stay in touch with the gear all the time and not to use a rotten- bottom, but the choice is yours. Bait with mackerel. The most effective and widely used spoons are homemade affairs crafted from old-fashioned stainless steel wall-ties, chrome banding (as is used to attach street signs to lampposts etc), or stainless flat-bar. You can’t buy these rigs locally and you will have to ask yourself if it is worth going to the effort of making them. It can be hard losing three of these rigs in three drops when each took close to an hour to construct! The easiest ‘covering’ option is to carry a few of the next rig that can be just as good with ling in mind. 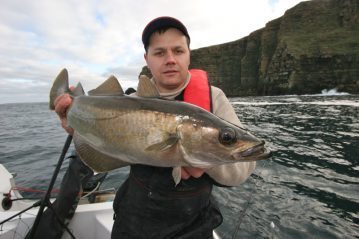 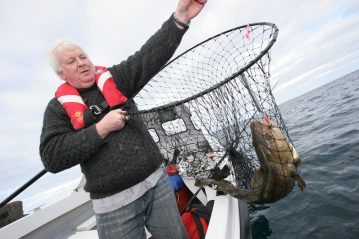 This is simply a fairly heavy pirk (chrome bars are good for ling) with either a short 6-inch blood loop or swivel dropper set above. Or alternatively, use a fixed French boom above the pirk, sprouting a 14-inch spoon trace. In this case I rely on keeping in touch with the end-tackle and don’t use a length of rotten bottom to the pirk.

This is primarily a rig to catch cod & ling. A 10in French boom projects about 4 feet of trace with a 6-inch muppet dropper tied about 15 inches from the boom, and a revolving spoon with a few coloured beads on the point. 4-inch yellow or red muppets work well, and also seem to appeal to ling, even when baited with just mussel. Use a fairly heavy mono to cope with ling teeth. 40lb bodies and 60lb bite-pieces to the hooks are the norm. Size 4/0 Kamasan B950U hooks are a good choice. Use a short rotten-bottom from the boom.

‘One up/one down bait rig’

Cod, pollack and ling can all be covered with this rig. A single Hokkai, a small muppet or jellyworm is tied on a short 6-inch dropper set about 18ins above the wire boom. The longer bottom trace is 24 – 36 inches long, with a revolving blade, or bar spoon on the end. Use an 8-inch length of 18 or 20lb mono as a rotten-bottom breakout link between boom and lead. Make a few of the same rig and the 2-down bait rig in 100lb mono to cope with spurdogs if they show up. Smaller hook versions of these rigs or simple baited feathers such as Hokkais are ideal for haddock. 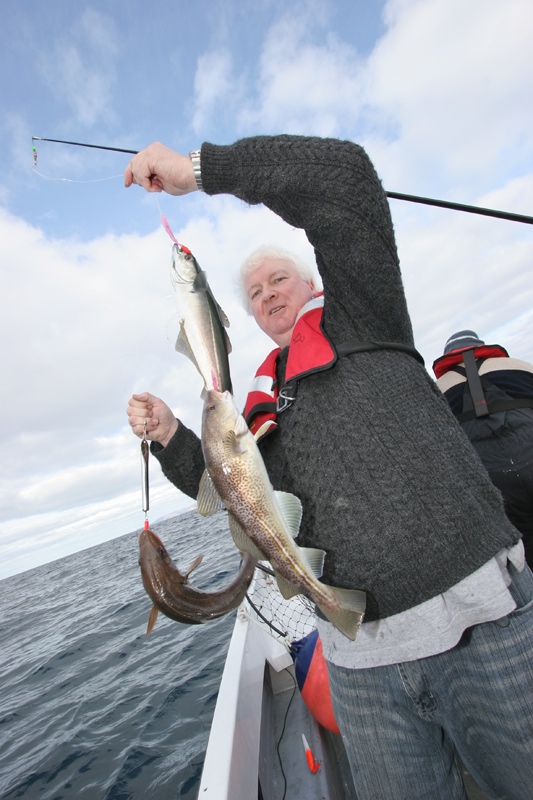 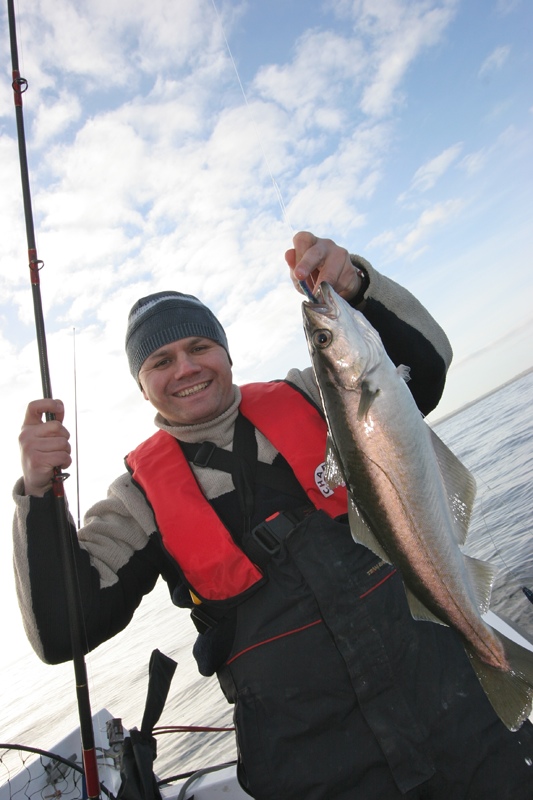 Spinning rods and 5-metre boat-match rods are of limited use I these waters, but that is not to say they are completely redundant. Generally however, the venue is too deep and best approached with more standard rods. Think along the lines of a 4–10oz uptider or similar for long trace pollack work; Daiwa TDXB12/30 for general pirk and bottom fishing; and TDXB20/50 for any heavier work that may crop up. Many of the anglers that regularly do well on the venue use a Daiwa Saltist 30TH reel for just about everything. Some successful anglers stick to mono for pollacking, but 30lb braid covers all bases.

Orange/yellow, red/white and chrome are the most effective pirks while black firetails, orange and pink are hot local lure colours. If I could have only one colour of jellyworm or Red Gill it would be a firetail. The local tackle shop does not carry a huge range of appropriate gear, but we understand that the organisers have made arrangements to have tackle on sale at the competition HQ.

Always carry a couple of pound-&-a-half and 2lb leads… just in case, but I wouldn’t expect to be using much heavier than 1lb for bottom fishing, and 6oz for standard pollack fishing. There is little place for very light leads, and as a guide, the main spectrum would be plenty 6, 8, 12oz & 1lb weights.

Mussels, worms, fish-baits and squid are the mainstream baits. Mackerel is widely used and universally effective for all the core species. 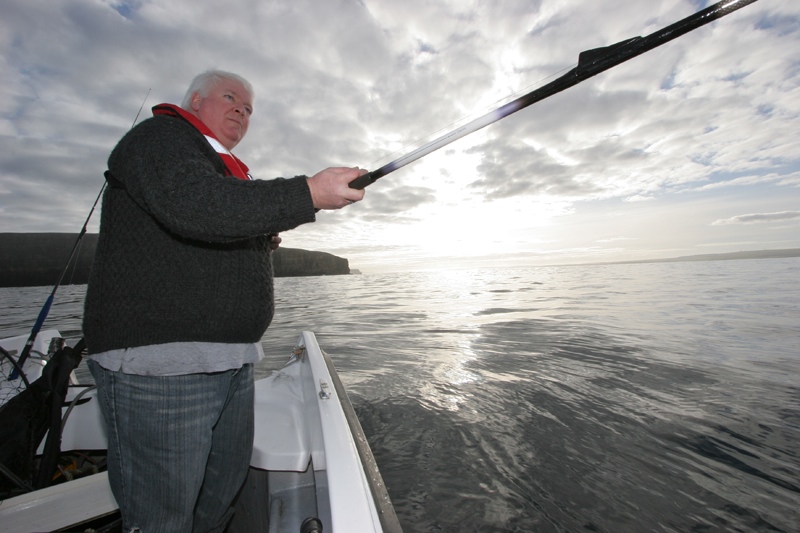 In the event of bad weather the boats may be restricted to fishing inside Scapa Flow. The fishing in here is generally for smaller versions of the same species as outside along the cliffs of Hoy etc. In addition it may be possible to target dabs on the clean ground.