Catching cod along the exposed North East Scottish coast doesn’t have to go hand-in-hand with toiling through boggy fields or scrambling down cliffs. Steve Souter says there are easier options like East Haven near Arbroath.

Made up of just a handful of seafront houses, East Haven is a tiny village neighbouring Arbroath. A natural harbour, the sandy beach is flanked by rocks on either side, which, once-upon-a-time, provided shelter for a flotilla of small fishing boats. What separates this part from much of the rest of the generally inhospitable coastline is it’s easy to negotiate. There are no tricky cliffs to scale, and you can be fishing in less than 10 minutes from the beachfront car park. In fact, with nothing more testing than a quick clamber over none too difficult rocks, East Haven is a bit of a sissy mark by comparison to those that bit further north. 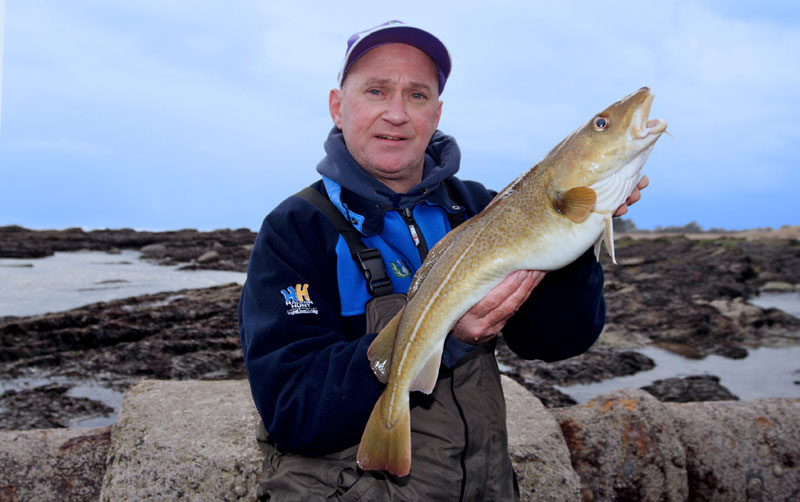 The main railway line skirts the shore and the peace is regularly interrupted by the blast of a two-tone horn or the clatter of trains going to, or coming from Aberdeen. East Haven is a shallow water venue that in winter relies entirely upon on rough onshore conditions for fish. When conditions are bang on the button, the fishing can be fantastic with 50lb bags possible. After what seemed like months of uninterrupted westerly winds and too many blank trips, the forecast had the direction swinging hard from North East. I joined Edinburgh anglers Gordon Lyall and Shaun Cumming on an impromptu visit to the venue

Motion and coloured water are the winter keys to unlocking the best of what this and other shallow east coast venues have to offer. Factor in a big tide, and only a fool would bet against catching cod.

It was still dark when we arrived. Wind had buffeted the car on the early morning journey north, but there is always apprehension en route because hoped for conditions don’t always fall to plan on arrival. Darkness denied us any clear sight of the shoreline, and the beautiful whistling music of a gruff northerly was yet to stir. It was freezing for sure, and the sleet and snow that had also been loudly promised didn’t feel too far away. 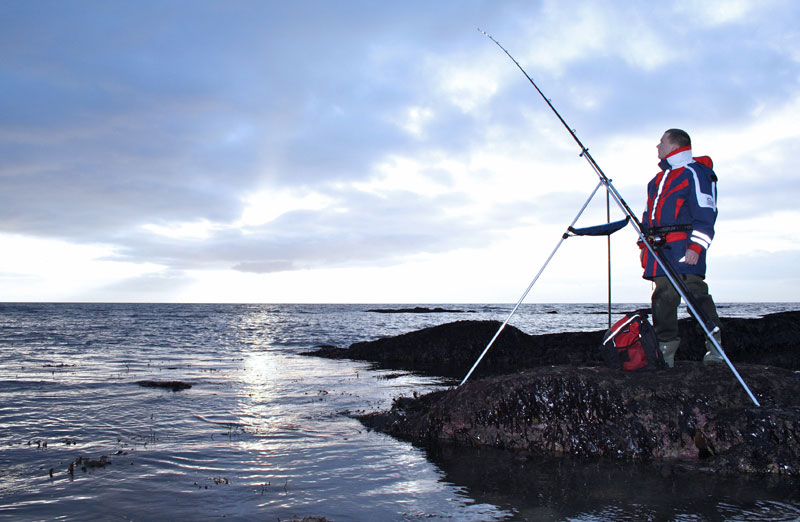 Shaun and Gordon travelled light with small tackle rucksack, bait bucket, single rod and rest each. The beach itself and rocks either side, all produce fish given the right conditions. With daylight yet to break and low water still a good hour-and-a-half away, we angled left towards one of the rockier confidence areas. As a rule, I would class two hours down to low water and the first two of the flood as the prime fishing period. This is not to suggest that other times don’t produce fish, rather, to make the point that you can pretty much choose to remain in the same spot for the early period. After that there is no alternative other than to retreat with the tide.

East Haven is a real peak-and-trough uneven expanse of kelp-covered rock ledges, gullies, deep potholes and strewn boulders. A quick glance is enough to confirm exactly why cod push inshore here in bumpy conditions. A word of warning at this point: always track your progress down to the low water margins, taking note of any lower lying cuts that will quickly fill up with the flooding tide. Never linger too long on the prouder rocks, particularly on a big tide, and always keep a wary eye on what the tide is doing behind you as well as out front. And beware of those man-eating potholes. It wouldn’t be the first time that someone has stepped into an innocuous looking hole in failing light and gone in over the top of their chest waders. 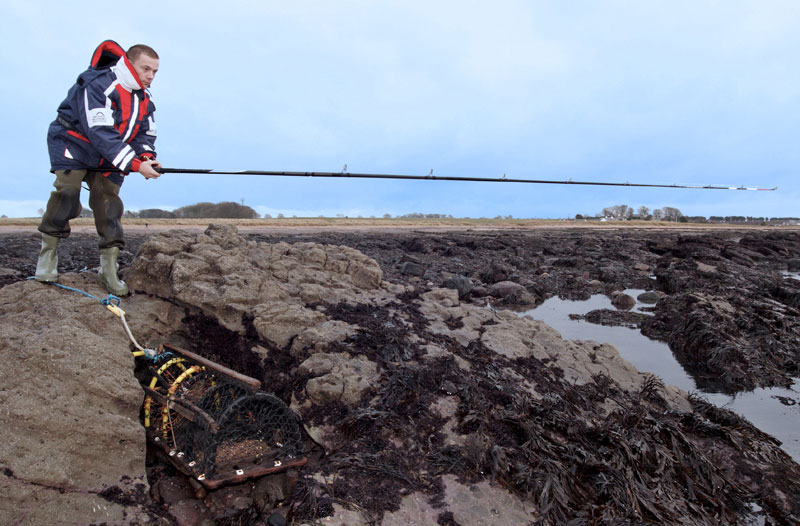 Gordon set up practically on top of the old pipe which trails out through the rocks and acts a good marker for anglers visiting the venue for the first time. As the tide floods, casting parallel to the pipe on the left-hand-side can be productive, but like much of this area you do not get much time on this particular mark as the incoming tide forces you backwards at pace. Shaun set up a little further over.

Dead low water coincided with a reluctant sun’s first rusty orange glow cracking the morning. First light is a magical time to be stood on the shore and I couldn’t tell if the rod tip or birth of a new day was studied hardest. I basked in this brief flaring glory as now heavy skies looked certain to ensure any brightness would be short lived.

As any bait digger worth his salt will tell you, the wind has an uncanny habit of dying away on bottom water only to double back and slap you twice as hard when the tide turns to flood. Today was a perfect example of exactly that. You could have been forgiven for thinking the weathermen had got it wrong again as the previous chill breeze faded to an erratic low water puff.

The first couple of hours brought no bites, but the wind returned with renewed vigour and vengeance on the turn, making fishing pleasantly uncomfortable. Shaun’s rod was the first to bounce as a cod fell on his bait. It has to be said that the place is a minefield of nasty snags, with some places much worse than others. Unfortunately, Shaun’s first customer knew exactly where the snags where and hung him up irretrievably. 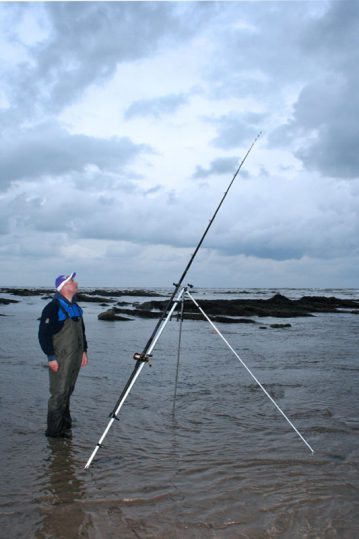 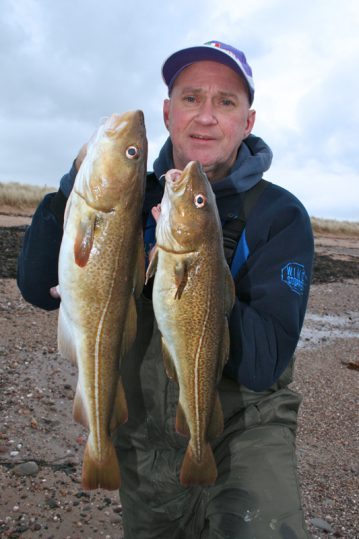 Bites began for Gordon about an hour into the flood as the water level rose over the bottom of the pipe, and the basin to the left began fill. The howling wind had quickly aggravated the existing sea motion and a sky heavy with inevitable snow had me questioning the sanity of all of it. Gordon was crouched poised to strike a bite as I wandered over with the camera. Sweeping the rod upwards and cranking the reel at the same time, there was no mistaking the bend in his rod. Because the venue is fairly flat and you are almost level with the sea, it is essential to keep the rod tip high and muscle fish ashore. With no high advantage to press there is nothing else for it.

The reward was a fat golden cod not far off 5lb, which came kicking ashore. Gordon unhooked the fish, depositing it in a rock-pool and quickly cast out his ready-baited second rig. No more than five minutes later his rod towed over again. He was casting maybe 50 yards into a depth of less than 10 feet and finding fish. His second fish was smaller at around 3lb but typical of the stamp East Haven delivers in favoured conditions. 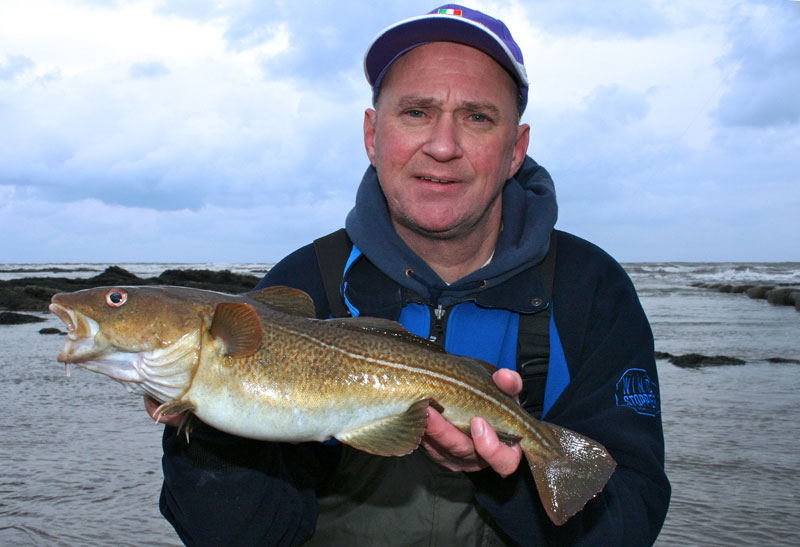 Shaun joined us to report a couple of solid bites that came to nothing and a pile of lost rigs. Bloated cod stomachs stuffed to the limit were evidence of hard feeding but time and tide had got the better of us and we had to move. In the space of a couple of hours the sea had turned really nasty and weed became a problem too. Timing is often everything, and the chances were that the place would be buzzing with fish on the back of two days of this. We would be long gone by then, but I’d have laid loot on good fishing for the weather-watchers lucky enough to get a day off work midweek. A short hop over to try their luck on the beach rewarded the boys with nothing other than horrendous weed monsters… it was like pulling in dead bodies! This was always going to be a short session but the bitter cold and the eventual onset of driving sleet and snow ensured it was cut shorter still.

East Haven is typically heavy cod ground best tackled with strong tackle. Choose a stiff rod and meaty reel like the Daiwa SLOSH 30 or Penn 535. 30 lb main line Bimini hitched to a 60 lb leader is advised. Single 3 ft snood cod rigs with either a single 3/0 hook, or similar pennel work best. Rigs should incorporate a rotten-bottom component to reduce tackle loses. If fishing a 30 lb reel line, I think it makes sense to use 20 lb line as the weak link to the lead. I prefer to use grip-lead. I work 6 oz as standard but won’t hesitate to up that to 7 oz or heavier in rough conditions. 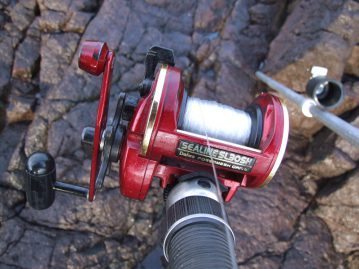 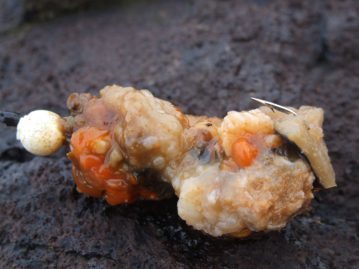 Lugworm, crab, mussel, razor and squid all work well in winter. Gordon’s successful bait was a three-way cocktail of peeler crab, juicy mussel and a small piece of mackerel popped up with a luminous floating bead.

Follow the A92 north picking up signs for Arbroath after Dundee. After Carnoustie, take the turn-off for East Haven and Hatton. Follow the minor road all the way. After the sharp left-hand bend, turn left at East Haven village; going under the railway bridge and into the beach car park.