Sea anglers lives are largely governed by the tides and a basic knowledge is essential. This five-minute guide explains why tidal movement occurs and how times and variances are predicted.

Knowledge of tides is extremely important for the sea angler more many reasons including catching fish, collecting bait and launching small boats launching boats. Every celestial body produces a tidal effect, and in the case of the earth, it’s the moon and the sun which produce the tidal movements. Of course the moon is many times smaller than the sun, but because its orbit is far closer to the earth it is this mass which has the greatest effect on our oceans.

The sun has a similar effect but its magnitude is about half that of the moon. Every two weeks the effect of the gravitational pull is at a maximum as the sun and moon aline with each other. This effect which occurs at a full and new moon gives the spring tides with the highest high tide and the lowest low tide, hence the largest tidal range is found during the period of spring tides.

Conversely when the moon is at the first and third quarter the pull is at its lowest as the pull of the moon and sun acts in opposition to each other to give us the lowest tidal ranges known as neap tides. The period at which a tidal range reaches it highest or lowest height is known as slack water or dead water. 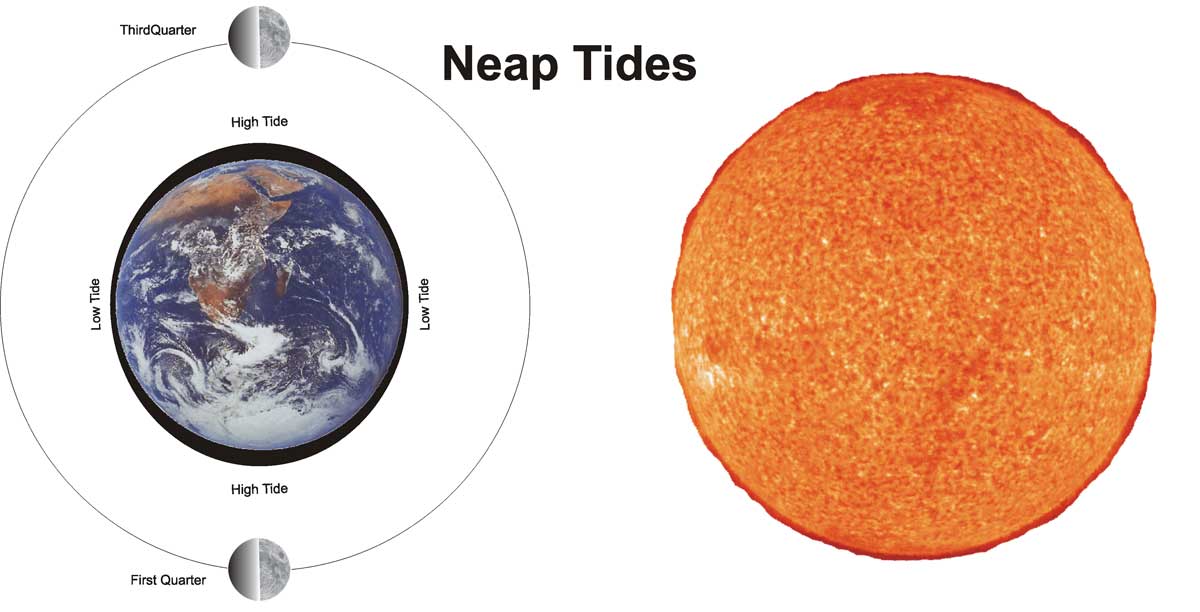 The largest spring tides generally occur at shortly after the new or full moons nearest to the spring equinox on 21st March and the autumn one on 23rd September. Because of the rotation of the earth about its axis the equivalent high and low tides will be 50 minutes later each day – in other words, there will be 12 hours and 25 minutes between high tides.

The period of time between low water and high water is known as the flood tide, while between high water and its lowest point is referred to as the ebb tide. In general, there will be two high and two low tides each day (semi-diurnal), but in a few locations only a single high and low tide occurs in a 24 hour period (diurnal). Certain places are further complicated by interaction of tidal harmonics and a double high water may be experienced such as that at Southampton. Or, in the case of Portland near Weymouth, a double low water can occur.

Because every location has a unique coastline and variation in sea depth, the tide times vary from port to port even though the area is under the same bulge of high water. Areas where the water tends to be funnelled in and out will have a comparatively large tidal range but most will vary between 1 and 3 metres.

The movement of the oceans as a result of tides produced what is known as tidal currents. The effect of these currents generally increases as the water nears the shore, and changes in direction and speed can be rapid. In open waters the tidal current effect is much diminished, but when the tidal water reaches an estuary the effect can be increased to produce high waves such as that found in the Severn Bore.

Tidal height charts or software are widely available and tidal current information can be found in boating almanacs and on maritime charts. Current tidal predictions and downloadable tide tables for numerous UK ports can be found on the site.

From the above information anglers can see just how important tide is when planning bait collection or a fishing trip. Many marks will only be accessible around low water, wrecks may only produce fish when the tide is at its strongest, some species may only feed at slack water, and there’s no point in going to dig lugworms when the beach is underwater.