Our planned boat fishing in north Donegal had been blown out, rained off and all but swept away by a freak tornado that announced itself by flattening a building site and tearing up trees in the nearby town of Buncrana. Heeding the forecast, our skipper had dodged the coming weather by running for the shelter of nearby Greencastle Harbour the night before, leaving Norman Dunlop and I at the mercy of the Guinness monster in the lively guesthouse bar. 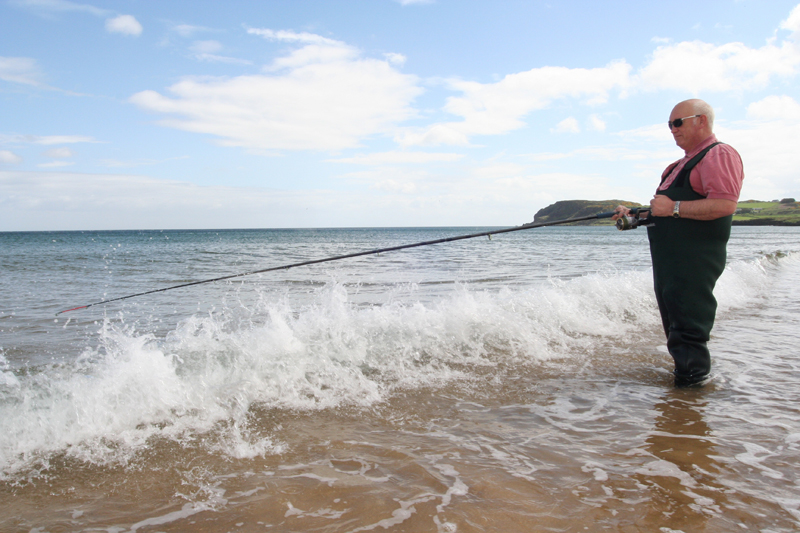 Predictably, the next morning dawned bright but breezy, which was a halfway accurate description of how we felt having enjoyed the fine hospitality of McGrory’s bar in Culdaff for longer than was sensible. With the boat fishing knocked on the head, our fallback was always to explore the local shore fishing. Luckily the beautiful village beach lay not five minutes from the guesthouse door, which meant we didn’t have to drag our paracetomol suffused carcases very far.

The sandy sweep of Culdaff beach rims the edge of a gorgeous V-shaped bay that stretches from quiet Bunagee harbour at the northern corner, curling down and eastwards to meet with the rocks of Dunmore Head. The Culdaff River runs in at the point of the V and has a quiet reputation for sea trout, as well as for drawing mullet and bass in the right conditions according to patrons of the bar.

A stunningly dusted crust of white-gold sand lapped by crystal clear water, the beach is a sight to behold. Norman and I sought to wile away a few quiet hours fishing here, and with the place completely to ourselves, we were meat in a sandwich of peace and beauty. 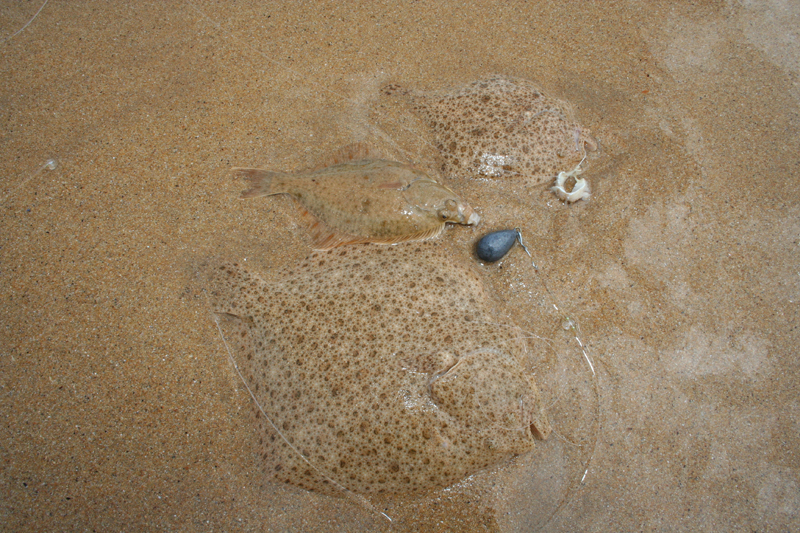 With little information to go on we chose to begin fishing right in front of the access from the car-park on the east side of the river. This was all of 30 yards from the car door and meant we had a quick get-away should the heavens open, as looked a distinct possibility as we pulled the gear out.

Flounders and perhaps and an odd turbot were reputed to be possible fare but the beach isn’t well fished and catch information away from the actual river mouth area was sketchy. We had lug and ragworm in the bait bucket along with some two-day old festering mackerel that stank to high heaven. If I have learnt anything about fishing in Ireland, be it from the boat or on the shore, it’s the importance of decent fresh mackerel bait, so confidence wasn’t exactly brimming over. But the day was as much about relaxing and drinking in the surroundings as it was about catching so we weren’t discouraged.

Tranquil as the scene was, out beyond the shelter of the bay, crowns of angry white water told exactly why the local boats had gone into hiding. Closer in, right in front of our position and at various other points along the beach, feeding gannets dived, loudly bursting the surface in narrow plumes of displaced water. Other seabirds hovered, repeatedly dropping to buzz and claim what we took to be sandeels working out of casting reach.

Everything was wrong for catching fish as far as I was concerned. There was no significant surf to speak of and we had arrived at high water to fish the tide back. My instincts told me this was the reverse of what we wanted to chalk up a few fish. However, if Norman and I have one thing in common then it’s stubborn persistence. 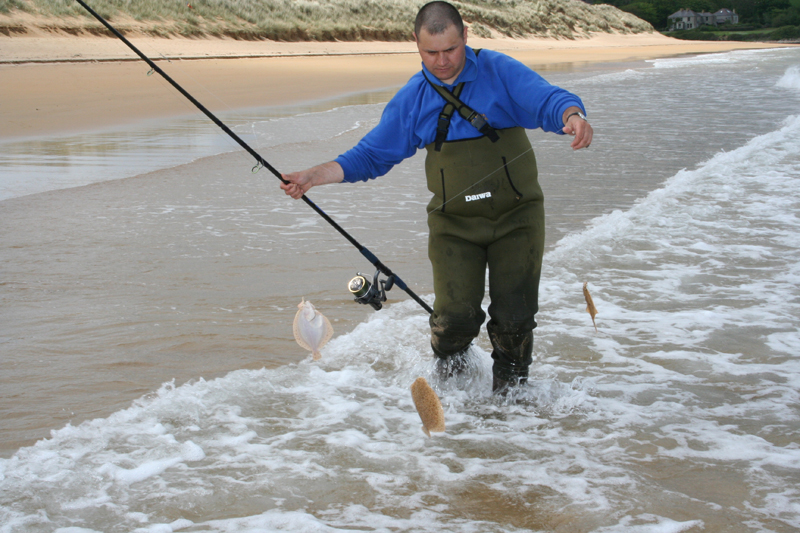 We set up two rods each: a light bass combo for fishing short and a standard beach rod for chucking that bit further. Rigs were simple three-hook flappers with longish snoods to size 2 hooks.

Norman’s gutter rod was the first to register an interest which turned out to be a small flounder. I followed suit with a small turbot on the bass rod, then another flounder taken much further out on the beach rod. This was a better start than either of us had anticipated and any lingering malaise from the evening before soon evaporated.

About an hour in, my bass rod was being tugged big style. The fixed spool reel was loaded with 20 lb braid and as such the bites were quite spectacular. Thinking it to be another flounder, I used the Baitrunner facility to peel off a few yards of slack line, leaving the bite to develop and hoping perhaps for a double-shot of flatfish. What I got was a treble-shot consisting of a brace of turbot and a flounder.

I was flicking no more than 20 yards with the light set-up and had yet to pull in a blank cast. Norman was doing the same and racking up the flounders which seemed to be more prevalent a few yards along to the left of me. 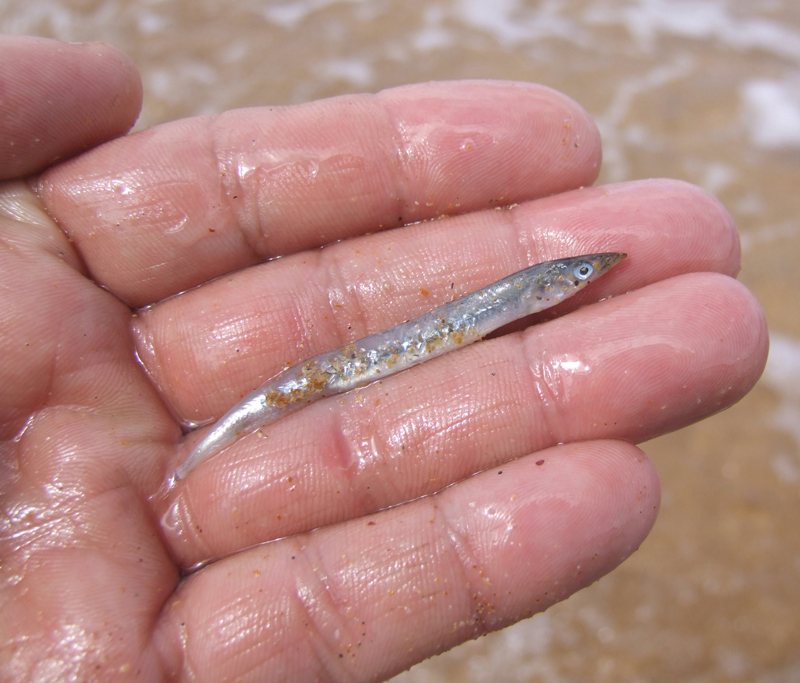 Several of the beached fish spat out small sandeels, cementing our earlier seabird theory, and leaving me to wish that I had packed a few packets of Baitbox eels. The beach rods fishing further out were next to useless and basically abandoned while we worked with the bass rods.

Norman was mixing and matching worm and mackerel on his hooks, while I had gone to straight mackerel baits in improvised mimicry of the sandeels. We weren’t attracting particularly big fish but we were getting plenty of them. Sooner or later at this rate we would rumble a better fish or two.

The potential for cracking turbot of several pounds was as clear as the water we were chucking into. I didn’t really want to catch flounders unless they were big ones and prayed for bigger and better turbot. I couldn’t help thinking that with a different set of variables some cracking turbot, not to mention the possibility of a bass or ray, had to be staring us in the face. Given a bigger tide, with bit more surf, and fishing through the flood with good sandeel and fresh mackerel baits, god only knows what kind of fishing we could be neck-deep in. 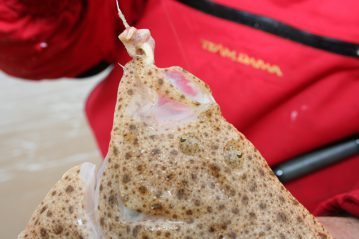 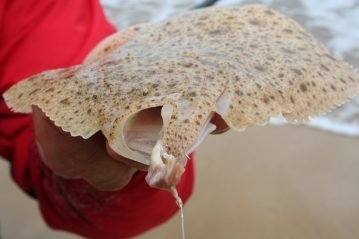 What’s in the magic bottle?

Worm baits, straight fish, or cocktails continued to pull flounders but our catches fell away after mid-tide. For the first time Norman and I drew in a couple of blank casts. We thought that the action might be over but the lull proved only temporary.

I keep a little bottle of magic bait additive in my bag for bite-less emergencies. A Dutch friend distils the evil-smelling stuff in his own still. I have no idea what the bottle contains but I have used the stuff for years and have huge faith in its fish attracting properties when all else fails. A single deep whiff is enough to make a grown man wretch, as I am sure Norman will testify.

I daubed my new mackerel offerings with the honking gear, while Norman threatened to be sick and ran away. The seabirds were back and dive-bombing well offshore. Was it coincidence I wonder that or rods began nodding again at the same time? 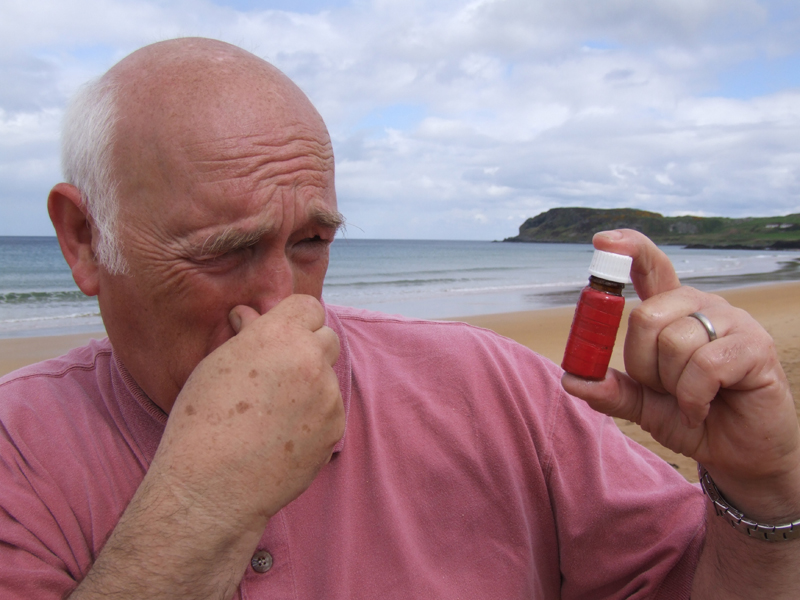 I really enjoy holding a light bass rod; gently twitching the rig just a couple of inches here and there to create little puffs of sand and hopefully drawing attention from buried flatties. The tactic resulted in a full-house of turbots on the doctored mackerel.

For a change, I waded out perhaps 15 yards. Eyes fixed to the floor and moving slowly, I disturbed a decent fish which ricocheted off my foot and gave me the fright of my life. Other fish, small flounders most probably, made off in streaks of disturbed sand around me whenever I shuffled forward.

Norman shouted over and held up a treble-shot of flounders, while I was knee-deep in water and winding in a kicking weight that was clearly more than one fish. As the rig came into sight I could see taught snoods towing in different directions…something that I will never tire of seeing. My reward was the biggest turbot so far and a flounder of similar proportions.

Turbot and flounders kept coming until low water. Norman added a couple more quality turbot as I took my turn fending off small flounders. Strange how I got only got seriously pestered with baby flounders when I stopped using the stinky potion. 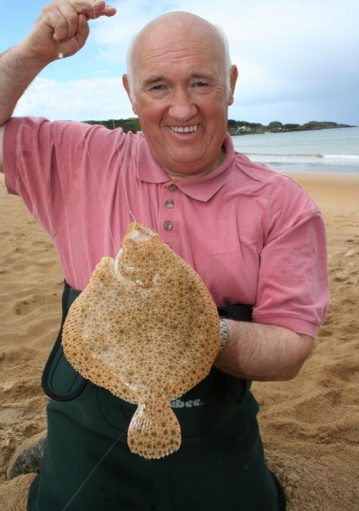 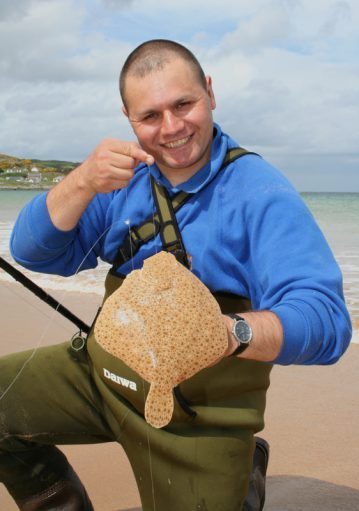 We didn’t have scales but we did have a measure, and the best turbot went 40 centimetres, which at a rough guess is around 2 lbs. We experienced a short fish lull at bottom water, but as the flood began to tickle, they were back. With more than a dozen turbot and goodness knows how many flounders to the good, and Norman with as many again, we had done what we came to do by then. And with the hotel just round the corner, it was time to answer the call of the Guinness monster who had beckoned for long enough.

I travelled P & O Irish Sea from Troon to Larne and was amazed at how easy and trouble-free this crossing was. For those who make regular trips from Scotland to Ireland by ferry I would strongly recommend the Troon crossing rather than departing from Stranraer which is much harder work and a regular traffic nightmare. Dual carriageway takes you almost straight into the P & O Irish Sea Troon ferry terminal and clear roads from Larne saw me at my destination in under two hours. Full Troon crossings details can be found at www.poirishsea.com

Culdaff is 162 kilometres from Belfast and sits on the spectacular Inishowen Peninsula, north Co Donegal in the midst of beautiful beaches and tremendous rock fishing. The boat angling out in Culdaff Bay and beyond has been lauded in close-knit Irish circles for decades, but fishing this good cannot be kept quiet for long. An absolute abundance of wrecks holding big pollack, coalfish, ling and cod seldom fail to deliver, while the mixed ground highlights include plaice, turbot and rays among a large array of species. Further shore and boat fishing information from the Central Fisheries Board website. 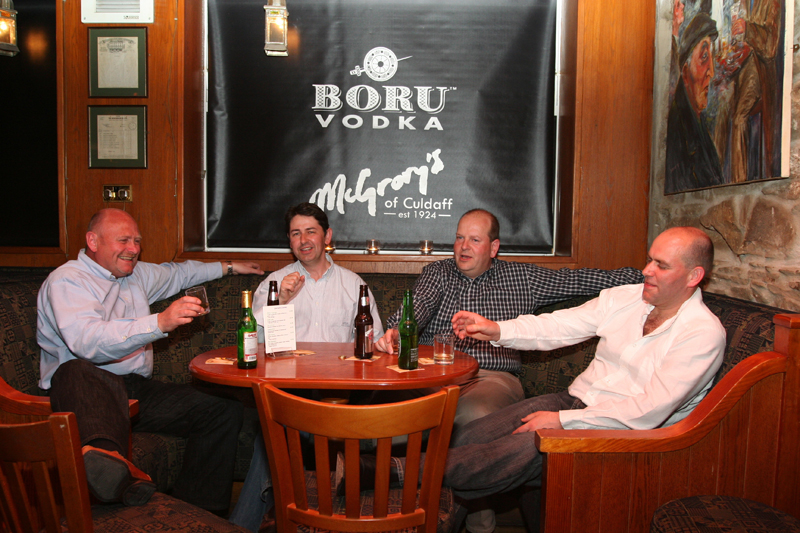 We based ourselves at McGrory’s pub in the village. And you can’t mention Culdaff fishing without also talking about McGrory’s because the two are a marriage made in angler heaven. More than just somewhere to rest weary heads, McGrory’s offers everything visiting anglers could want, including a warm and welcoming atmosphere, great accommodation, superb food and drink, and the option of fantastic live music for which the venue is renowned throughout Ireland and indeed around the world.