Steve Parker scrambles down to the iconic Pulpit rock on Portland Bill for an early tilt at the local wrasse population using light tackle tactics.

With sunshine forecast for the end of my week’s holiday, I was keen to squeeze at least one day’s fishing in before returning to work on Monday. Curry and beer the night before did not bode well for an early start and a day on a charter boat. Instead, I opted for Portland Bill to try for early wrasse from the shore. I had previous good sessions on the east side of ‘The Bill’, and the better weather conditions would this time allow me to fish the legendary Pulpit Rock marks. 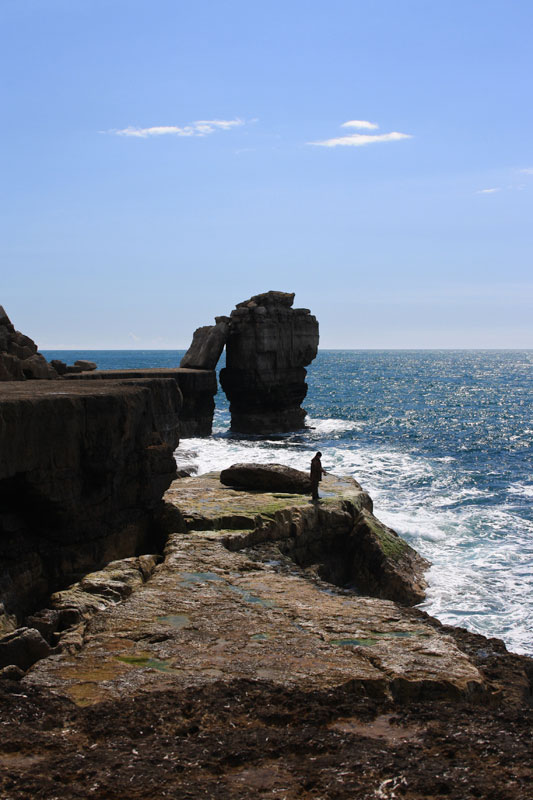 On the way, I called in at Weymouth Angling Centre to pick up some fresh ragworm and frozen hermit crabs. I also bought some extra small weights and drilled bullets for my floats. I reached the car park at Bill Point by 9.15 and there was just one other car parked up. Lovely and quiet is just the way I like it.

I set up at the base of the Pulpit, wanting to try fishing to both sides as I was not brave enough, or athletic enough to contemplate climbing it. I started fishing with a 2oz weight and a single hook on a short Portland rig. My crab bait was cast out into the evil mass of rocks and weed.

I hadn’t thought things through properly in my eagerness to get fishing. The tide was ripping past and my 2oz weight had no hope of holding. The rotten bottom connection surrendered the lead on the second cast and I quickly switched to float fishing. This fared a little better when casting in to the margins out of the tide, but if I strayed in to the main flow the float hopelessly flying past me in seconds.

I moved to the south side of the Pulpit and tried the float. The current was less fierce but still a problem and if I did catch anything sizeable then landing it would be a struggle… but I’d worry about that later. Hooking a fish was my first concern and a switch to ragworm brought a savage bite as I gently teased the float in to the shore.

My reactions were pathetic, and the fish bolted straight under a ledge and jammed the tackle. I shifted up and down the ledge, pointed the rod in all directions and tried the loose line trick all to no avail. I resorted to pulling for the break and somehow managed to get everything back but the hook. 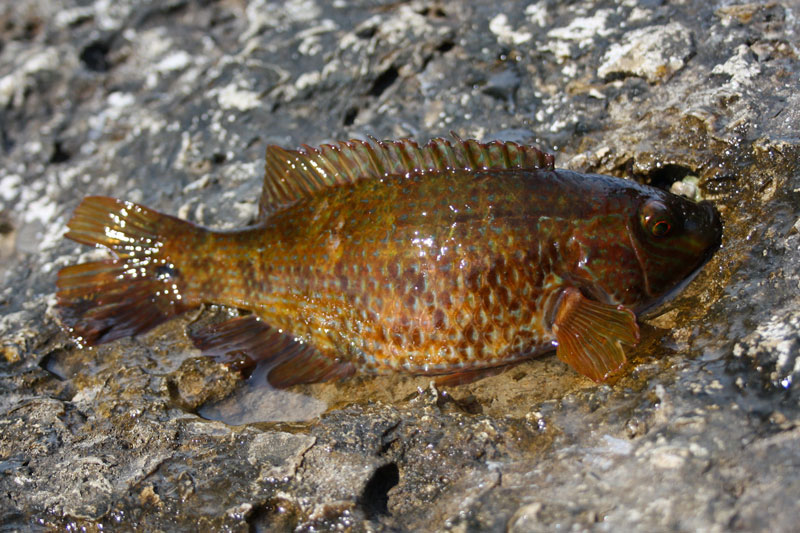 PuddleSplasher, a member of the Shore Angler forum, had recommended I try free-lining a ragworm into rocky ground for pollack and wrasse. The snags were a real issue made worst by the conditions, so I decided to give the free-line method a shot.

I wandered back to the north side, and more in hope than anything, dropped the worm below my feet. This worked fine until the worm drifted in to the area of tide where the water rushes under the arch between Pulipt and the Bill where it accelerated to about 30mph and must have been on the surface out of my line of sight. Unperturbed, I tried again and astonishingly just as the worm reached the fast water I had a rasper of a take.

The fish felt much bigger than it turned out to be, using the fast flow as it tried to burrow under the arch. I was on better form this time and managed to keep its head up. I soon had a ballan wrasse of 1¾lb on the rock at my feet. Encouraged, I continued the free-lining tactics until the tide dropped. With the wind coming from the North West I found it easier flicking the worm out on the south side of the rock where the easing flow of the water gave allowed a longer run before I had to retrieve. 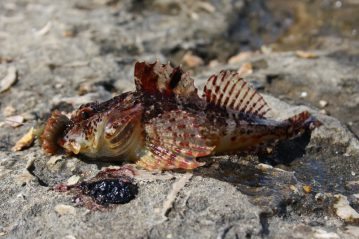 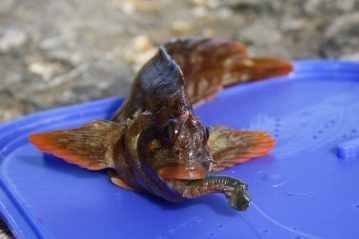 I caught a corkwing wrasse almost immediately, followed by a tompot blenny. These openers were followed by several other small fish in rapid succession including: several small ballans, corkwings and a spikey sea scorpion as identified by Dave Pitman, Skipper of Atlanta in Weymouth who is about as attractive!

As the sun broke through the gloom my beautiful solitude was instantly no more as a bevy of rowdy holidaymakers invaded the rocks. I’m very happy to chat to anybody about what I am doing and what I am catching and it is nice to see the kids take an interest in the fish and the bait etc. What terrifies me though is that parents are letting the kids as young as five or six roam all over a place as dangerous as Pulpit Rock without supervision. I spent a good hour with my heart in my mouth every time a nipper went to have a look over the precarious edge. 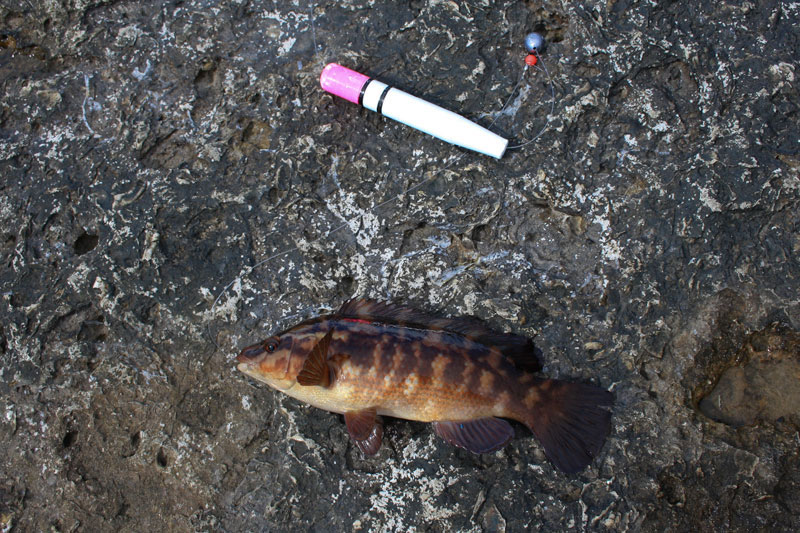 As a final fling of the dice I decided to head to the far end of the ledge that runs to the north of the Pulpit and away from the rabble. The view back towards Pulpit was stunning and the weather was now absolutely glorious. Another angler and his son were lure fishing in this area and the lad had taken a pollack on a soft plastic. He went on to bag a decent ballan on a legered bait as I looked on

There was less flow here so I went with the float set-up. After a quiet 20 minutes I sussed the depth and found a couple of spots where I was repeatedly getting bites. I managed another three ballans, a couple of which pushed 1lb, but my first fish of the day remained my modest best. There will be other trips to the area this season and bigger fish for sure, but catching good fish is only part of the allure these fantastic and legendary rock marks.