Finding a new venue to fish can be as simple as as asking a mate or checking out Facebook and internet forums and collating the information. However, there are areas of coastline that do not have regular visitors or even are virgin ground for the shore angler. Researching a new shore mark can be more rewarding than simply going where others have been before.

Particularly on the coasts of Scotland, Wales and Ireland there are miles of beaches and rocks that rarely if ever see a bait cast. Investigating a new shore mark can be as simple as travelling to an unexplored area and simply conducting an exploratory fishing session. 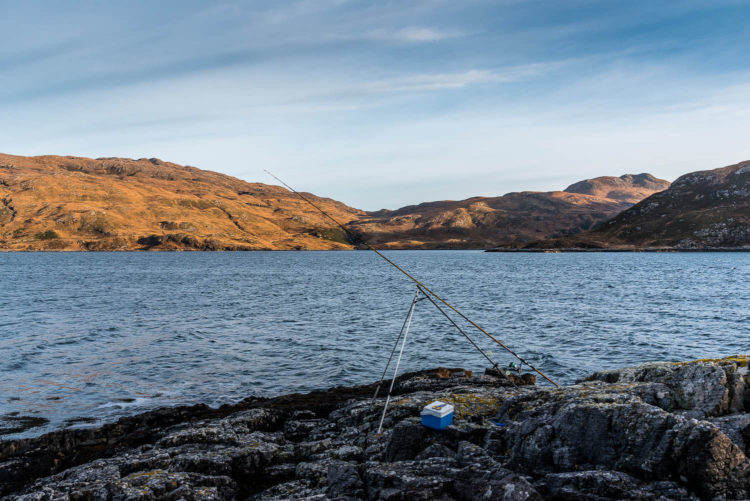 Looking out over Loch Glencoul

However, preparation and planning can help ensure that valuable time is not wasted on a fruitless venue particularly as distances of over 100 miles can be involved.

My first step is to establish a rough area of research for the proposed trip then head to the Navionics charts.

I like the detail that the Sonarchart version and usually use it with the satellite overlay which helps with establishing a location. The contours on the chart allow features to be clearly indicated in the search for a new shore mark. The charts also give a basic indication of the seabed although this is general in nature. Prominent rocks and obstructions near to the surface are distinctly marked. 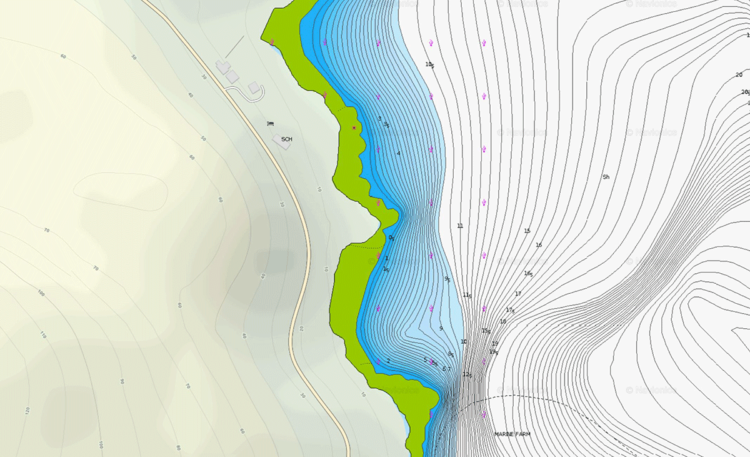 The days of expensive Admiralty charts are now a distant memory.

Looking at the area around the Kylesku bridge I decided to look closer at the area of Loch Glencoul around Unapool.

15 years ago the sea angler would have had to rely on Ordinance survey maps to check out the location of a new shore mark. I still have a valuable collection on my bookshelf at home.

We are fortunate now that Google and Bing now have online maps available where ever there is an internet connection.

While Google is the first name that springs to mind for maps I have found that Bing maps provides better detail in the less populated areas. Both of the map sources have road map versions as well as the detailed satellite versions. 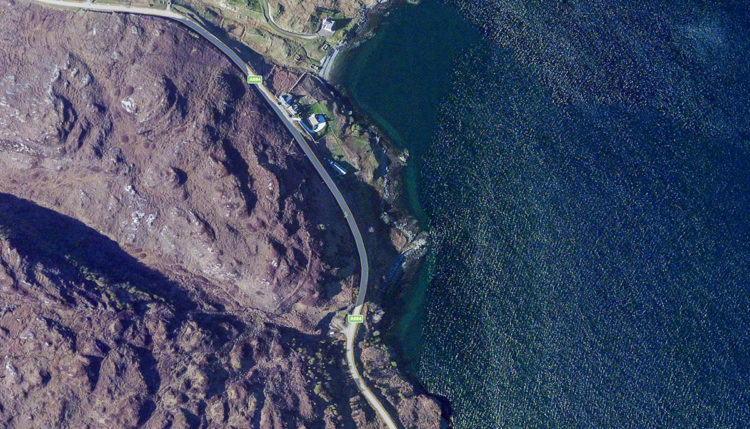 Bing also has an Ordinance Survey overlay which helps show land contours and slopes to assist in planning access to new marks.

The satellite view showed an interesting rocky platform at the south end of Unapool. Switching over to Navionics charts where the tight contours indicated a comparatively steep sloop which provided a reasonable depth within casting distance.

Being surrounded by steep sloping hills Loch Glencoul provides shelter from most wind directions although winds funnelling down the glens can be magnified.

My final piece of online research involved a visit to Google maps and dropping the wee yellow person onto the Unapool road to switch to the Street Map view.

A virtual run north along the A894 showed two possible parking spots, the first a small disused quarry approximately 150 metres south of the proposed mark and the second a flat area of land north of the rocky promontory.

It is easy to spend several hours virtually cruising the highways and byways looking for interesting features.

Taking To The Air

Although the wind proved to strong to set up a drone flight over the new shore mark I have found that overflying and recording video can be valuable when researching venues.

Not only does the aerial view show colour changes in the sea indicating rocks or sand but it can save long unproductive walks to establish if a mark is suitable to fish.

The video shows a remote north coast mark that I was unable to access due to the tide height. An access path is distinctly marked and suitable casting platform is shown at the seaward side.

On The Day At The New Shore Mark

A quick look at the tide tables for the area indicated that the neap tide would be flooding until the back of one o’clock. Unfortunately, I am no longer able to provide the tide tables on the site but if you drop me an email I will see what I can do for your area.

After a three hour drive I arrived a the quarry parking spot and did a reconnoitre of the proposed mark which sat at the base of a slope descending from the roadside. Although the slope provided reasonable access a fence just below the top prevented approach from this position. 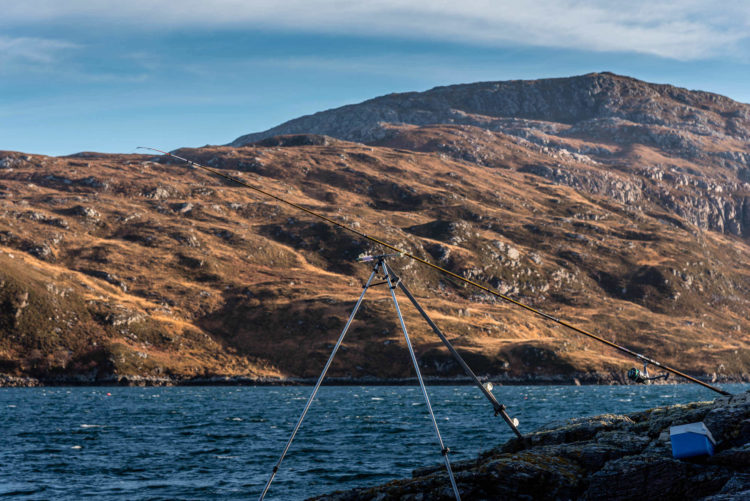 A short move up the road to the previously identified roadside flat land provided an access option over a style in the grounds of the Rock Stop Cafe and Geological Exhibition Centre. As my trip was in November the premises was closed but in the Summer season I would stop, have a cup of coffee and request access which I am sure would be granted.

Closing the gates behind me I headed through the cafe grounds and off down to the right to my destination. Like most areas of the north west Highlands the ground was wet underfoot but provided easy access down the gentle slope.

The rocky ledge provided a stable casting platform with the majority of the higher surfaces free from weed and slippery algae. The weather was mild and dry with an easterly wind blowing from the right.

The neap tides meant that I was not able to dig worms so I was reliant on mackerel and sandeels from the freezer for bait. 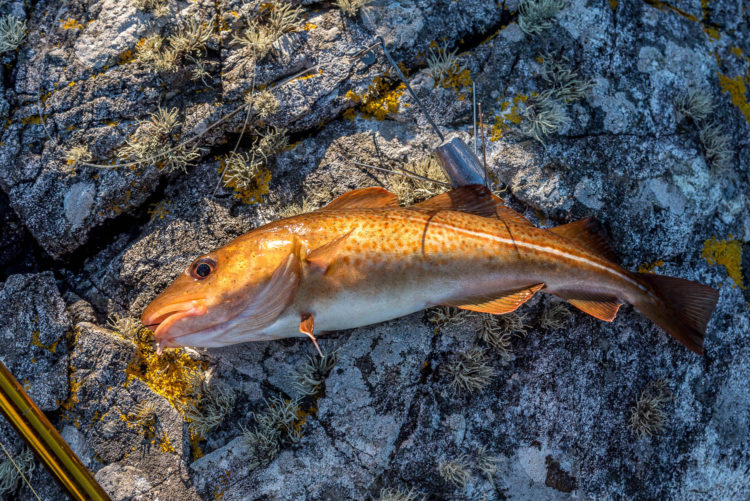 A codling from the kelp

The Navionics chart showed shingle and sand offshore with rocks around the edges of the sea loch so I expected flatfish, lesser spotted dogfish over the clean and coalfish and pollack around the rocks. Unfortunately I neglected to pack my lures so I would be limited to bait fishing.

A cast of around 80 metres soon so the rod bouncing as a small codling picked up the mackerel bait. The fact that there was more than sand out on the seabed was confirmed when the next fish was a tiny short spined sea scorpion. 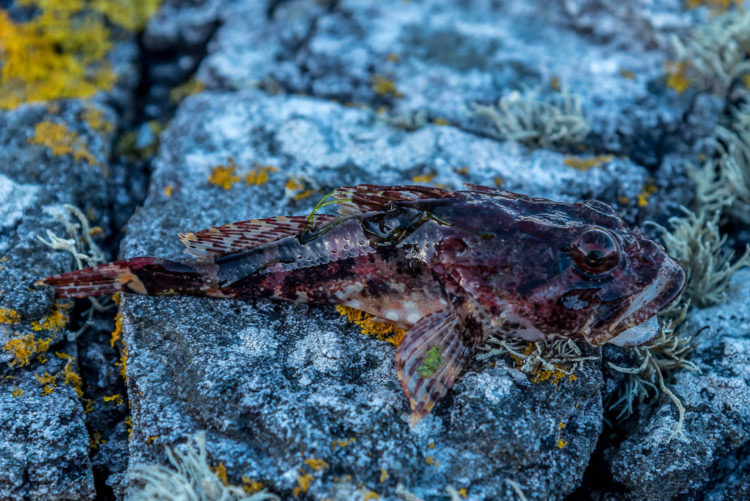 Several of the scorpions took mackerel bait throughout the four hour session together with codling up to 1½lb on mackerel and sandeel. A pollack picked up the bait close to the shore when it was being retrieved.

All in all a worthwhile trip made possible by the advanced planning. 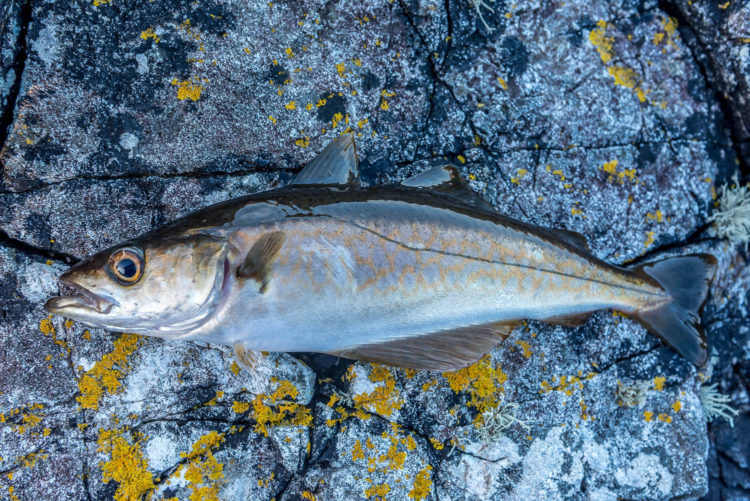 A pollack on the retrieve

One outing is never enough to establish the viability of a new shore mark and further trips will be organised to try different seasons of the year, tide stages, baits and to see how it performs after dark. The platform is safe and secure enough for an overnight session.