It’s late October 2008, the time of year when a small band of hardy anglers on the adjoining Isles of Lewis and Harris in the Western Isles of Scotland go quite mad. They spend countless cold, dark hours braving the Hebridean weather in hope of catching a large common skate from the shore. Last year’s multiple captures of giant skate from a small, rather innocuous looking pier near the entrance to West Loch Tarbert on Harris has more than flagged the venue’s potential. The best fish so far was last year’s 204lb new British shore record caught by Andy Porteus, adding to suggestion that this might well be the best shore mark for common skate in the whole of the UK. 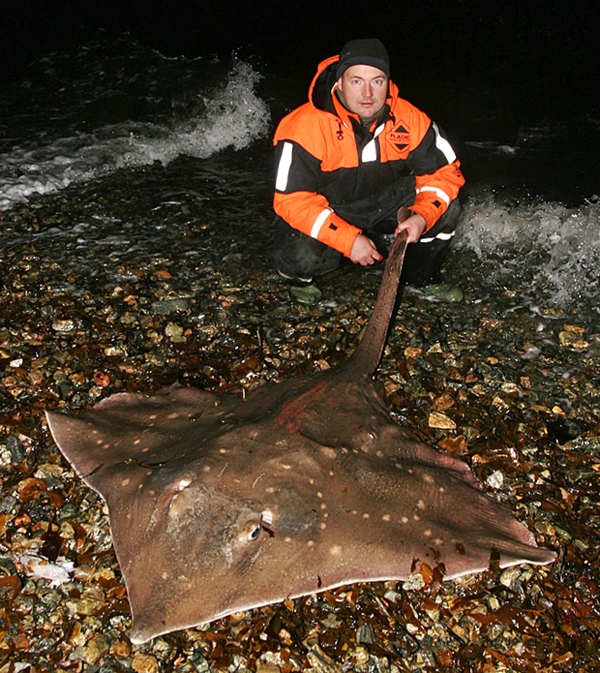 Various anglers tried their luck earlier this year, but despite solid hook-ups and powerful runs, none had been landed so far. The closest recent call had been two mighty fish hooked and lost in one night. One was hooked by a guy fishing for thornback rays. And he almost had the fish ashore only for one of the Mustad Viking hooks on his pennel rig to snap, and the other to completely straighten.

At exactly this time last year Gordon Mackenzie and I speculatively headed down to West Loch Tarbert pier. We were the first to fish the venue for skate as far as I know, with Gordon catching a mighty skate that first night, followed by two more on later trips. My pal might avoid credibility crushing competition banana skins, but Gordon’s a jammy git when it comes to big silly fish!

Whispers that local angler, Geoff Peterson had lost big skate days earlier prompted Gordon and I to visit the pier with the intention of fishing into the early hours. Nearly all commons caught or hooked in 2007 were encountered on an outgoing tide, usually just approaching or a little after low water. We had confidently chosen a good ebb tide on the premise that scent of our mackerel baits would carry well to any opportunist skate in the area. 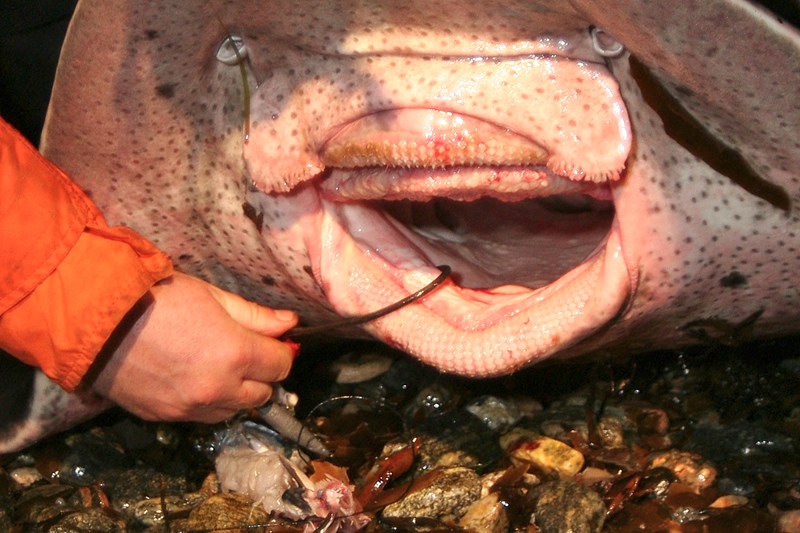 We were soon joined by Angus ‘Mopp’ Macdonald, and new Isle of Lewis resident Steve Phipps, who was eager to see how this shore skate fishing is done. All four of us fished off the end of the pier, which didn’t leave much room for manoeuvre. Although confined, a car can be driven to the pier end… a good idea given the pier light is currently kaput. As it stands you are fishing in blanket darkness apart from head lamps, so the extra light provided by car headlights is handy indeed.

Predictably perhaps, shore skate fishing is very much a waiting game. Crabs are a real problem in the loch – there are thousands of the damn things. And every time you wind in only to discover the hook stripped bare the question begs: How long have you been fishing bait-less?

Three rods were set up for a skate but we hadn’t had a sniff after six hours. Baits were checked every 20-30 minutes; more often than not hooks were retrieved almost completely stripped by crab activity, and that despite using whole mackerel.

Time passed slowly on Planet Skate. Mopp and I amused ourselves trying to catch small coalfish on light gear; Steve tried for a ray or doggie, while Gordon snored his head off in the van. At 12:15am, I saw Gordon’s rod twitch and steadily pull over. As it did, line streamed off his reel for 3 – 4 seconds then abruptly stopped. I yelled at Gordon to wake up! Line started slowly peeling off his reel again. He stumbled from the van looking like he had been dragged though a hedge backwards, picking up his rod just as line really poured from the reel. Suddenly alert, he immediately struck, locking into what was clearly a skate. 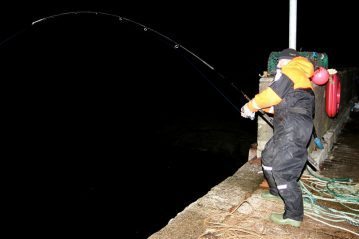 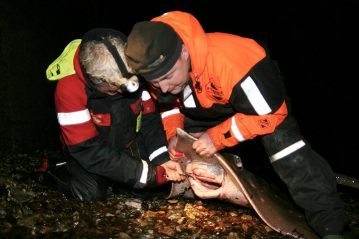 Gordon was using a 14 foot Shakespeare Team Extreme beachcaster and Shimano Ultegra fixed spool reel. Buckled to its very limit, the rod was just about coping. The fish ran several times causing much pain to arm, back and groin judging by the noises coming from whimpering Gordon. 20 minutes later a good skate was lashing in the shallows at the pier edge. Landing fish of these proportions is never easy. The technique here is to keep steady strain on the rod and walk the fish backward to the shore, only allowing it to run out again if there’s little choice than to do otherwise. The cobbled beach area at the side of the pier is a convenient landing area but not without its complications. As the fish was drawn into grabbing range, Angie Mopp clambered down and did the honours, finally guiding the huge fish clear of the water. Safely ashore, the female skate was promptly measured at 59 inches across the wings, and 79 inches from nose to tail-tip. The chart gave an impressive estimated weight of 159lbs.

First concern is always for the fish. Unhooking, measuring, tagging, pictures and the return procedure was a team effort carried out very quickly. Like all the skate I have seen caught from the shore, this one lingered watchfully in the shallow water for around an hour before swimming off.

Attentions soon turned back to fishing. After about 30 minutes of hoping, Mopp toddled off to make a cup of tea. In his absence his unattended rod keeled over and line emptied from his reel at speed. An antiquated 7ft boat rod and similarly derelict boat reel suggested he wasn’t exactly tooled or the job. But despite his several handicaps (some of which he can’t help), he had somehow managed to hurl a whole mackerel out far enough. This fact underlines how very close to the shore these skate come. Steve and I shouted our urgency to Mopp, who looked up from filling his mug and declared “No hurry”. When he eventually arrived nonchalantly sipping tea, the run had stopped and the fish was gone. The rest of us looked at each other and collectively declared him a plank! 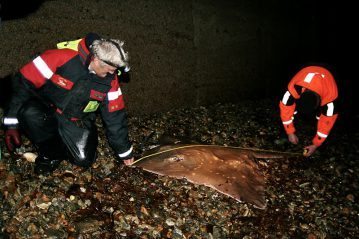 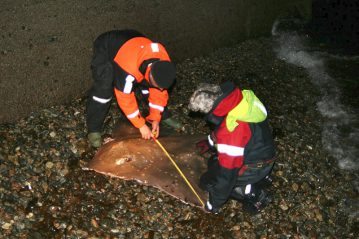 The next disappointment was mine. I heard the ratchet start ticking, and watched as the rod bent over and the reel whirred. I hefted the rod and hesitated. The run had slowed and I was unsure whether to strike or not. Instead, I slowly lifted and felt the considerable weight of fish as it continued to slowly take line. I was contemplating striking when the fish just stopped in its tracks.

Through the braided line I could feel it still there. I fought down the inclination to whack the rod skywards, waiting instead for the run to kick off again. My finger on the braid interpreted clear reverberations as the fish either flapped on the bait, or munched on the same. But the anticipated run never came. Finally, I stuck forlornly hoping what would be my first skate was playing dead – and pulled into nothing. I returned the rod to the rest and gave it a further 15 optimistic minutes before retrieving – the bait had gone. I believe my mistake was failing to set the hook early – a hard lesson learned.

It should be noted that Gordon’s 159lb skate was beaten on a fixed spool reel, which may be a first. Interestingly, in 2007 there were five different common skate landed from the pier. This year’s fish have again proven to be different individuals with no repeat captures. The suggestion is therefore that there’s a very healthy skate population in and around this particular sea loch. To target and catch these fantastic fish, all tackle needs to be fit for the task. Choose a meaty rod that’s preferably not too long and capable of casting a whole mackerel or coalfish bait. We fish with 65 – 80lb braid main lines and long rubbing leaders. The rig is very basic. From a 200lb swivel, 3 – 4 feet of 150 – 200lb mono goes to a wire bite section carrying a 12/0 O’Shaughnessy hook via another 200lb swivel.

The lead is carried on 2ft of 40lb mono from this middle swivel. Beyond that, good advice is always to fish with the reel’s ratchet engaged. Or, if following Gordon’s big fixed spool lead, slacken that front drag off before placing the rod in the rest and going to sleep.