John Francis Costello is now a regular squid angler, targeting these jet propelled cephalopods when they come within casting distance in the spring and as winter approaches. Here he explains how to get started in this novel branch of shore angling.

It has only been during the past three seasons that I have been fishing for squid from the shore and as such, I am far from being an expert, however you do not have to be to have a great sport and bag up on these amazing creatures. They are hard fighting, make great eating and freeze well to use for bait for a variety of species. There are two main species found in European waters, Common Squid (Alloteuthis subulata) and the European Squid (Loligo vulgaris). Despite its name, the common squid is the rarer of the two species and is generally the smaller of the two, reaching a body length of around 20 centimetres. The compact bodied European squid can reach a body length of more than 50 centimetres and presents an attractive target for the angler. 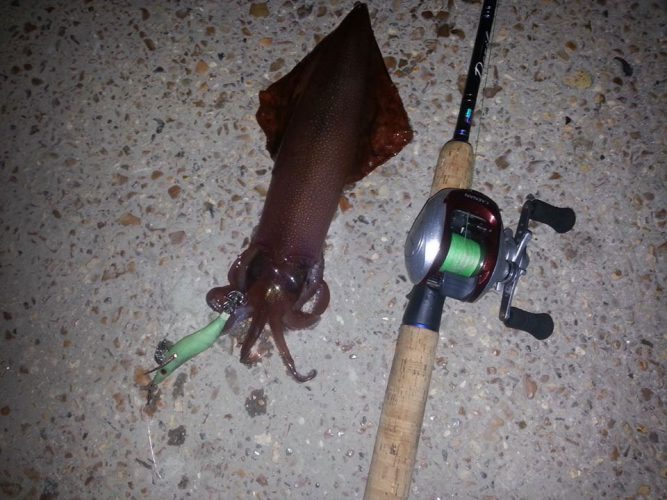 Although the squid can be found all round the UK, they tend to be most numerous in the waters of Cornwall, Devon and Dorset. Here in my home port of Plymouth, we have two runs of squid, a run in the spring and then a much longer movement inshore towards the end of summer, right through autumn. The late autumn squid seem to be much bigger than at any other time with squid over 2½lb quite common and three and four pounders a realistic target. Squid seem to like a mixed seabed where rocks and weed are interspersed with sand and gravel patches and they show their predatory instincts by hunting small fish, prawns and crustaceans. The Common Cuttlefish (Sepia officinalis) can also be found over the same ground where it is not uncommon for the cuttle to attack and mutilate an angler’s hooked fish. 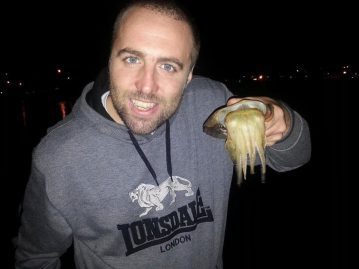 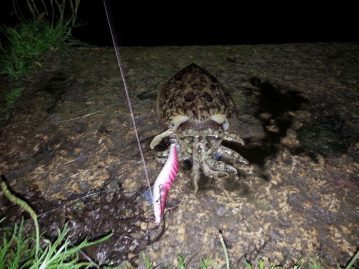 From our experiences around Plymouth, we have found that the squid prefer marks that have some form of artificial light, and move in around dusk and stay throughout the hours of darkness. There will be the occasional one caught in daylight but it is not a common occurrence, although you will catch plenty of cuttlefish during the daytime as well as at night.

As far as tackle goes I like to use LRF gear for squid with a rod rated 0.5 to 5g and 3lb fluorocarbon or 6lb braided line and as light a jig as I can get away with. This gives the squid the chance to give the best account of its self and show of its impressive water jet powered dives. The trouble comes with landing them on such light tackle as they are tricky enough to land at the best of times and have the habit of letting go of the jig right at the last minute. Therefore, if you have no landing net or drop net you will have major problems getting them ashore. Standard squid tackle is normally a rod with a casting weight of around 5 to 28g and 15 to 20 pound line. The squid will still give a good account of themselves but if you are fishing from any sort of height you will be able to hand line them up nicely without worrying about the line snapping.

Lure of the jig

As for jigs, you can pay as much or as little as you want, it is up to you. The standard 89p jig is a strong favourite round here and does a great job we have landed many, many squid on these. The lures with the spikes across the backs are also highly rated as they give another hook up point and can be picked up for as little as £1.30 in the shops. On the mail-order side, TronixPro do an attractive version in three colours for around £1.50 and these are widely available from sites like SportsDirect. Unlike a conventional lure with its single or treble hook the squid jig has a series of spikes that form a circle round the lure body. It is commonplace now for two rings of the spikes to be fitted to the tail end of the fish shaped lures. Unlike a fish, the squid or cuttle does not swallow the jig but grabs its prey with its tentacles before pulling it to its beak like mouth; hence, the multiple spikes to ensure a secure hold.

At the top end of the market, where the Japanese “Egi” fishers reign supreme the jigs are fitted with a keel weight which lets them sit with the hooks proud on the seabed. These can be up to £20 each to but Sovereign Super Baits do a good version online in three colours for £2.99. These lures weigh 20g overall and are fitted with a 3.5g keel at the head end. The jigs are rate by number, for instance 2.5 or 4.5 this number is the length in inches rather than the weight.

As for tactics, I think the most important thing to do is to locate the squid, basic yes, but probably the hardest part of squidding.

Jigs are rated in fall or sink rates, which is the time that it takes for the jig to fall through the water over a fixed distance. If you know your sink rate and the depth of water that you are fishing in then you can count down after the cast to establish when the lure reaches the seabed. If the manufacturer does not give the rate on the packaging then measure a metre of line off the rod tip to the jig, lower the jig into the water and quickly drop the rod tip to the surface. Count how long it takes for the jig to drop and tighten the line to give a rough and ready sink rate. 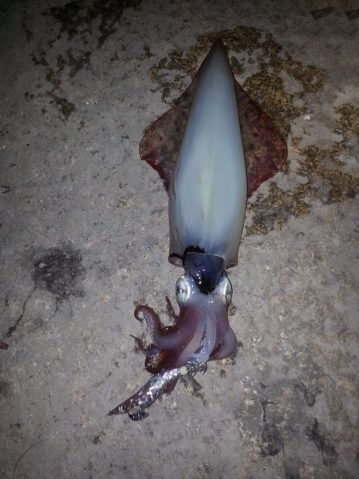 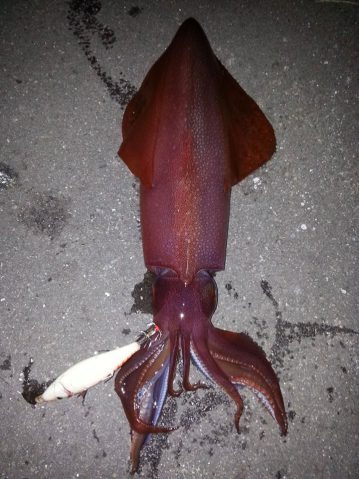 As mentioned above, some lures are weighted but others are not and some have weights that can be added to or removed to suit conditions. A popular local tactic is to add a cone or drilled bullet weight as used when fishing soft plastics to add a bit of weight if you find you need to. Generally the light the jig the better but as depth and tide increase then the weight of the jig have to be greater to compensate. The best-balanced jigs will sink horizontally through the water rather than by the tail or head and sit tail up on the bottom at approximately 45 degrees. 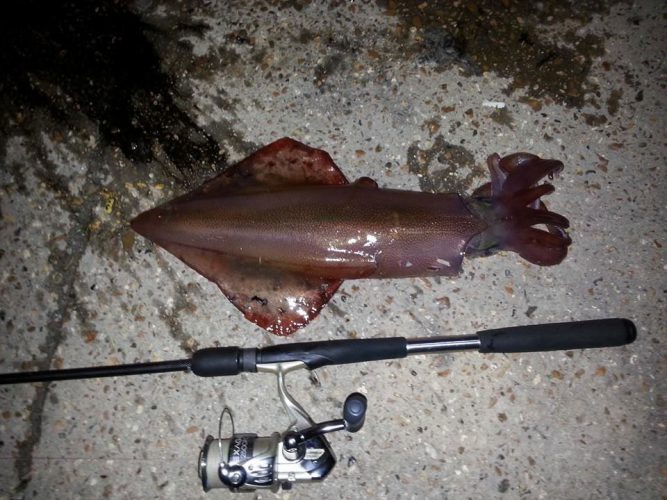 As I said, I am far from an expert and therefore not going to try to pretend I know the ins and outs on the fall rates of squid jigs. I just keep chopping and changing until I find out what seems to be working best, this is the same with jig colour. While squid may not be as intelligent at their relatives, the octopus they are smart enough to make it worthwhile changing size and colour after fishing an area for a while. Some days the squid will rush the jig on the surface, which can be exciting to watch, as a number of squid will compete to get to your jig. On other days they will be very shy and dead sticking, letting the lure sink to the bottom and just leave it stationary, will be the way to go. Bites are felt this way by the line tightening up and the rod suddenly banging up and down very slowly as the squid swims off. 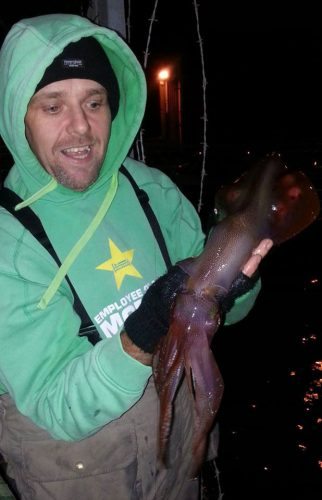 But the standard technique is to cast out and just jig the lure back slowly , just gently lifting the rod tip up then let the lure sink as you lower the rod tip again and repeat till either you get a bite or the lure is at your feet again. Varying the jigging action to a more aggressive sweep can also prove effective and it is possible to fish the jig below a sliding float. The float depth should be selected to allow the jig to be suspended just above the seabed and the action can be imparted by wave movement or by lifting the rod tip.

There is no dark art to squid fishing as my good friend Bill’s ten-year-old son Shamus proved. His dad and his uncle often take him out fishing and he was eager to catch his first squid. Unfortunately, on his first two nights hunting squid luck was just not on his side, he hooked and lost several squid, they have an incredible knack of shedding a lure right at the last minute. 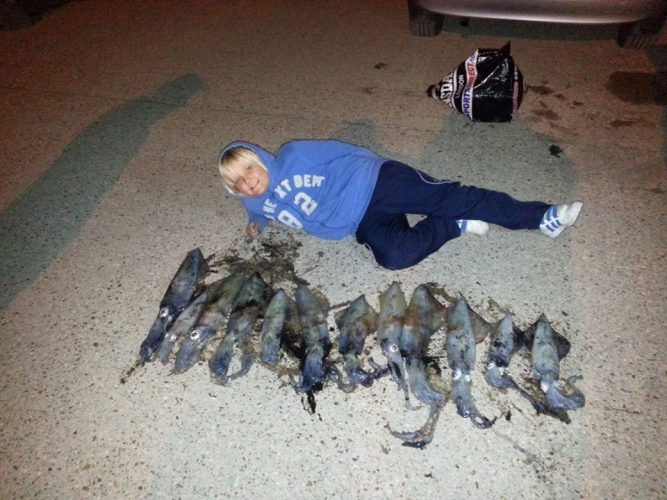 However Shamus was not to be beaten and the next three nights he out fished everyone. Fifteen plus full-grown men out fished by a 10-year old lad as he landed squid after squid. He now regularly enjoys a session on the squid and has caught as big and as many squid as any of us this year.

So go and give it a go it is great fun, easy to do, highly addictive and most people will find they have the basic gear lying around to start with, get out there and prepare for salt and chilli squid on the menu, but try not to get inked!