Steve Souter visits the wild and windswept beach at Sandside, Caithness in the shadow of the infamous Dounreay nuclear facility.

Beaches in proximity to Caithness’s now decommissioned Dounreay nuclear facility regularly make northern headlines for the wrong reasons. A significant number of radioactive particles tracing back to shameful illegal discharges that occurred at the plant more than 40 years ago have been discovered on several Caithness beaches. Despite the furore, these particles don’t pose any significant threat to public health if a screed of government documentation is to be believed, and for that reason the beaches remain open to all. Stirling’s George Bell and I were well aware of the bad press Sandside beach near the village of Reay had received, but curiosity spiced with a little insider knowledge found us taking a nosey peak at the sweeping track of sand on a blustery day that dictated no fishing boats would escape the harbour. 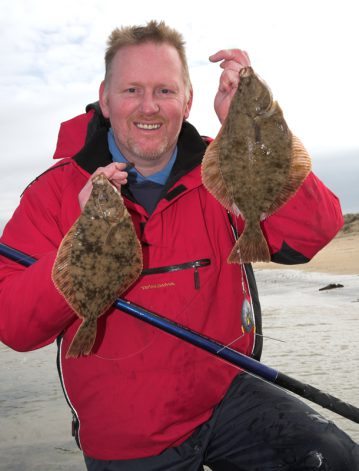 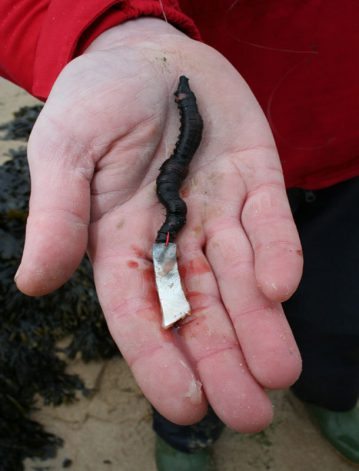 Great big yellow signs proclaiming previous discoveries of minute grains of radioactive material and ongoing intensive beach monitoring, would ordinarily have been enough encouragement to get back in the car and disappear. But despite our quite natural niggling concerns, picnickers, frolicking surfers and unconcerned dog walkers indicated general indifference. No-one paid us any heed when we wandered down: George with his fishing rods; me with cameras and a big bag of sandwiches. Sullen skies were the only dampener hanging over an otherwise inspired beachscape that promised fish. David Proudfoot living in nearby Janetstown had assured George that Sandside was a good bet, certainly for flounder, but also bass and turbot in a heavy surf. Dogfish could also apparently be caught in decent numbers after dark…not that we’d come all this way to party with those scrubbers. 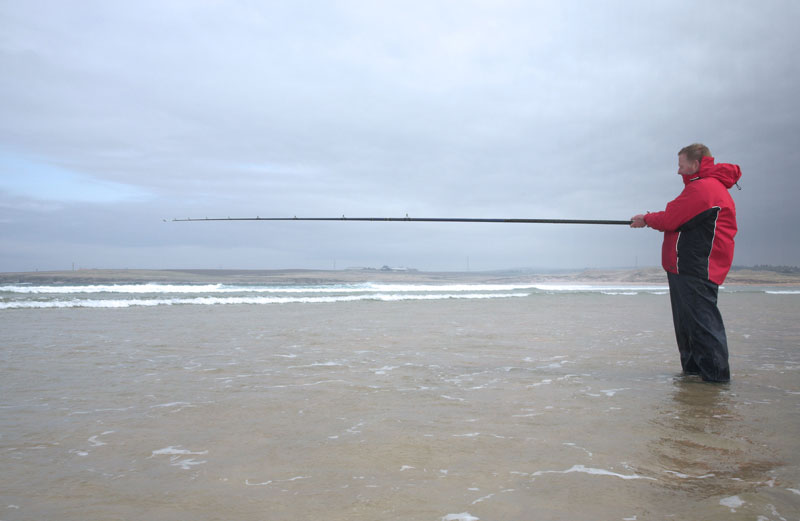 From roadside parking short of picturesque Sandside harbour, the beach stretches a mile or so eastwards, along behind Reay golf course and ominously towards the ugly atomic spectre and scourge of an otherwise unblemished coastline that is the unrepentant redundant repossessing plant. Sandside is indicative of many beaches in the far north. The surfing fraternity have long taken advantage of the wild northern wave machine, tapping the raw power perhaps more often associated with the pounding surf-lines of Cornwall. Washed up dogfish or ray egg cases are not unusual items to find on a beach but super-size common skate egg cases are not something you see every day. As big as footballs, there were loads of these enormous pouches dotted along the high tide line: evidence indeed of bigger beasties that are well known to reside in the washing waters of the Pentland Firth. Incidentally, did you know that halibut are known to feed on skate eggs? 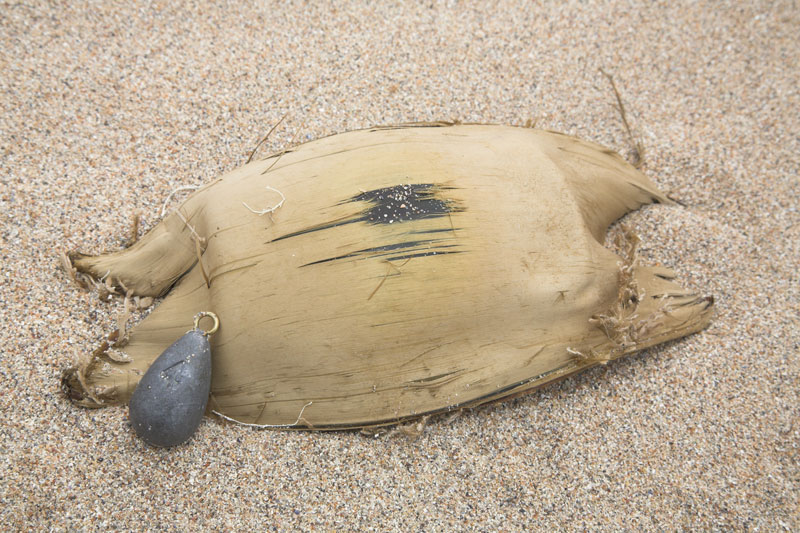 Fresh water streams dissect the beach at three points: at each extremity and plumb in the middle. A single natural groyne of weed-covered rock poked out to sea alongside a sprinkling of lodged boulders, around which the nearest stream flowed and forked in mini delta effect. Coarse sand to the immediate right was a shifting maze of undulations, pocks and snaking depressions. George marked this area as the beach’s best feature and draw. Lugworm casts peppered the lower part of the beach, and the flooding tide was just encroaching on them when we arrived.

George chose to set up on the rock finger, with options either to drop among the rocks, or into the clear sand on the opposite side. I’d like to say he’d worked hard to pull some lovely bait together, but the truth is he mugged me for a selection of worm and fish baits. Truth to tell, you don’t need fancy baits to catch good flounders and turbot on these beaches, and some decent mackerel, herring or launce fillet will get you among the flatties. I know plenty of anglers who have bagged up on 2 lb plus far north flounders with nothing other than a bit of fish in their bait buckets. Any bass however, tend to come to lugworm baits. 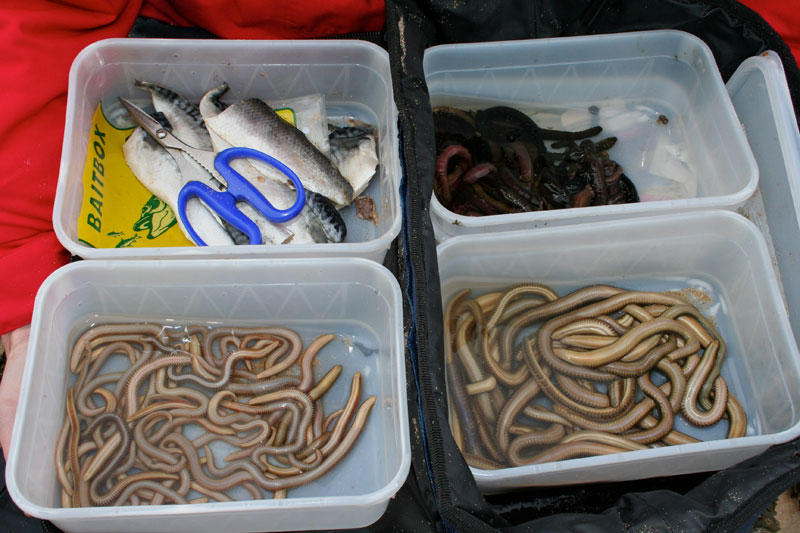 There’s something invigorating yet hypnotically soothing in an unrelenting tumble of frothing rollers. By comparison, to me, it’s a like sitting in the very midst of a spectacular electrical storm watching lightning crack the sky. How such angry energy is gentling on nerves is perhaps a muddling paradox that only true anglers can understand and embrace. Despite pronounced wave action these cleansing waters are normally crystal clear. Policeman George Bell is more at home fishing from a boat but he enjoys a spot of beach flounder fishing as long as there isn’t a lot of work or walking involved. The same applies to his bait digging, in as much as he doesn’t mind using it so long as he doesn’t have to dig the damned stuff! 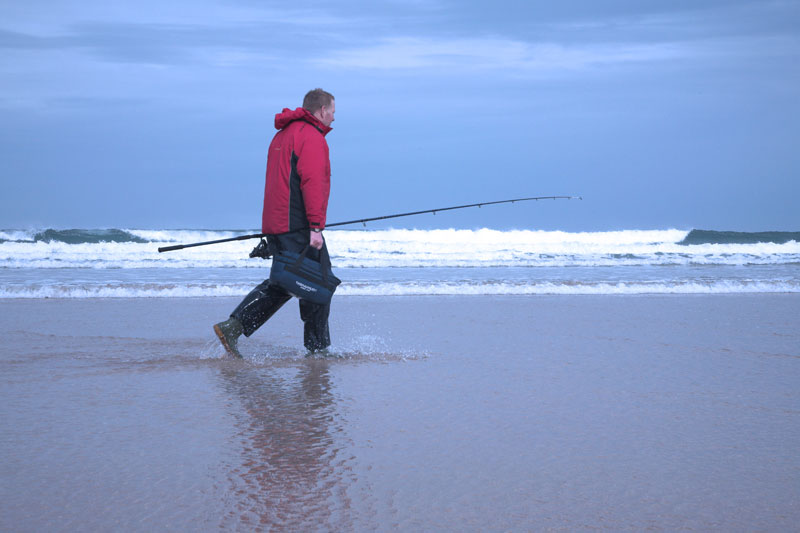 Rods, reels and other bits

George broke out two different set ups: a standard beach rod and multiplier reel loaded with 20 lb mono to a clear tapered shock leader, and a bass rod and fixed spool carrying 20 lb braid. The beach rod would take a 150 g Namix grip-lead to handle the pushing surf, while the lighter set up would be employed closer in with a plain rolling lead of not more than 4 oz. Simple two-hook flapping rigs with fairly longs snoods came out of George’s tackle wallet. Size 2 fine wire hooks were baited with lug tipped with a small wedge of fleshy mackerel, and casually lobbed no more than 40 yards into the advancing tables. 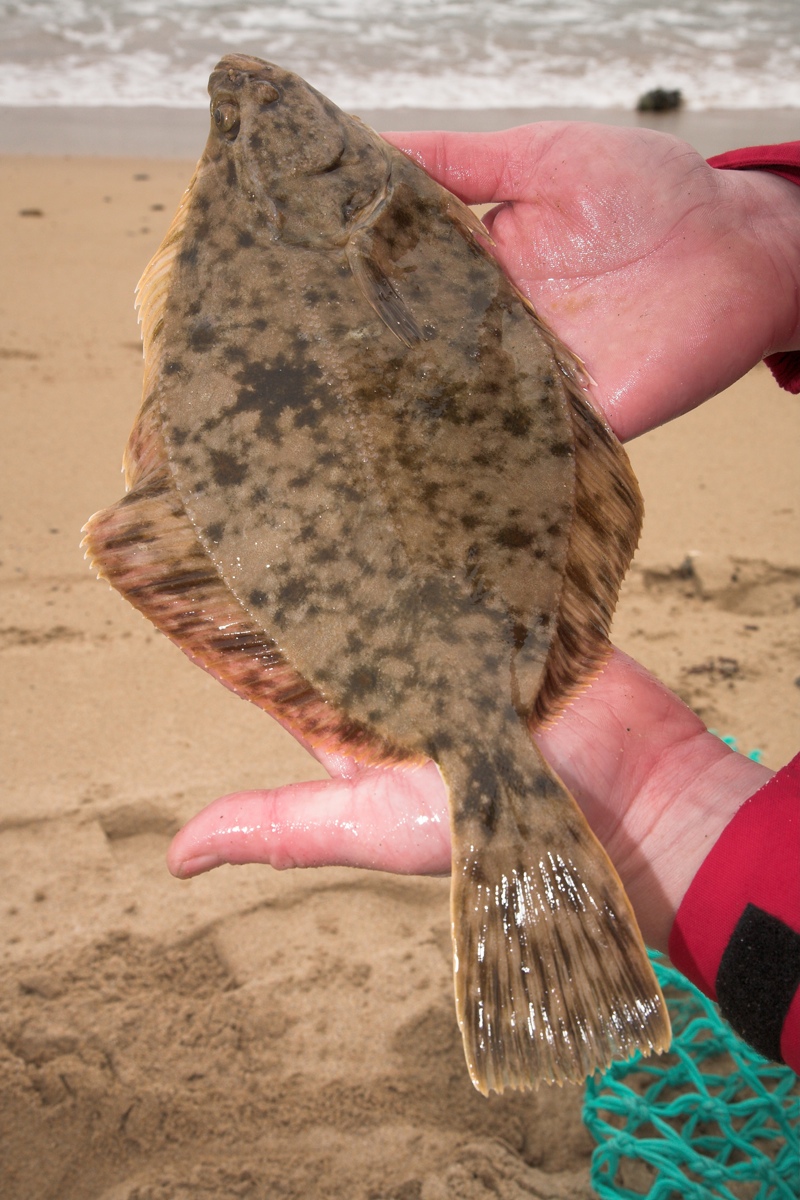 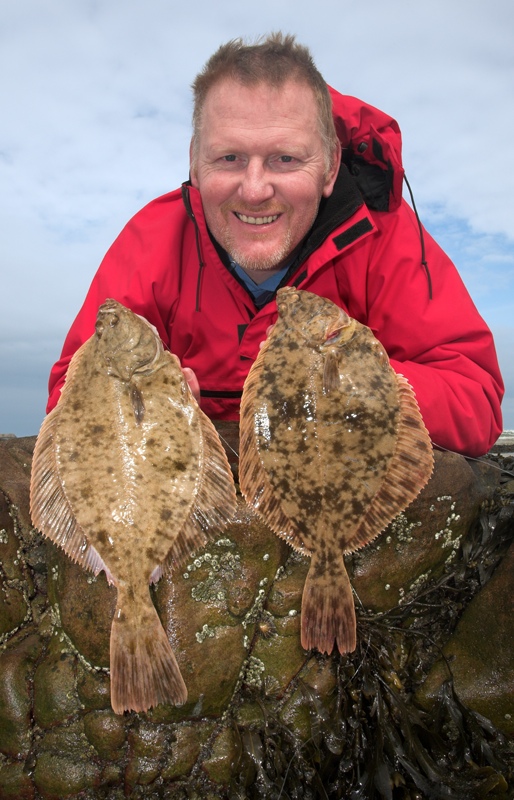 Bites came quickly with a double-shot of flounders about the size of your hand to the lighter rod on the first cast. I have seen similar open beaches throw up loads of 10 oz flounders with anything topping a pound rare indeed. Was this a sign of things to come? Negative thoughts evaporated as a good 1 ½ lb flounder followed on the second rod. Second and third fish of similar proportions soon came to George’s lug mackerel cast into the fresh water run-off among the stones or simply dropped into the deep scour right at the end of the jut he was standing on. Baits cast to the right continually pulled small flounders that sent the tip of the bass rod into dancing fits within a couple of minutes of casting out. Oddly perhaps, the rolling lead ploy accounted for only small flounders, while the fixed lead cast roughly the same distance took good fish one after the other.

George was winding in another fat flounder when his attention was called to the bass rod, which was signalling a tethered fish that was no flounder. We shouldn’t have been surprised by the baby bass responsible because these beaches hold good numbers of bass, most of which, it has to be said, are a good deal bigger than this chap turned out to be. The flood tide on summer evenings is the prime bass time. Fishing into darkness produces bass, but often plenty of Sandside dogfish too, that will happily munch worm baits not intended for them. 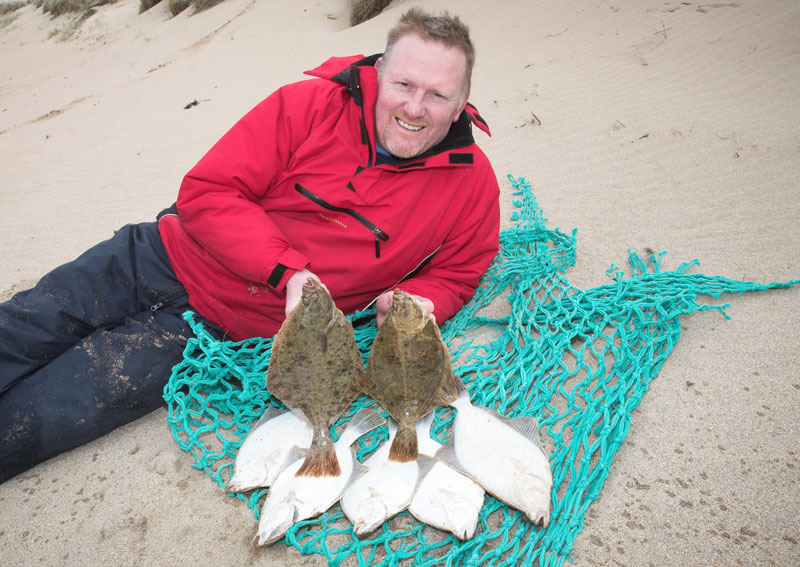 George abandoned the bass rod; working instead among the stones where the better flounders seemed to be concentrated. Casting and manoeuvring fish round the various stony obstacles was a bit like Russian roulette but PC Bell proved adept at stitching these hungry flatties. You might think that on a big old beach with clear sand stretching away as far as the eye can see, that the last place you would choose to fish is smack in the middle of a boulder-strewn corner. The difference between good fishing and not often comes down to exactly this kind of deliberate decision, and the fruits of George’s judgement were clearly there to see. Several more single plump flounders were capped with two cracking double- shots as high water approached. Straight mackerel and herring baits caught just as many fish as more exotic worm/fish combinations.

Turbot are very common in this area and George was a little disappointed that one hadn’t shown up on the day. Indeed the same could be said of reasonably sized bass, but flounder fishing this good, within a couple of minutes of the car door is not to be knocked.