If I could just set the scene for you – deep crystal blue seas, a crisp breeze, stunning mountainous scenery and deep fjords plus the most friendly people I have ever met. This is my Iceland shore fishing, the land of fire and ice, and fishing to exceed your wildest imaginings.

This is not the first time I have visited these shores and it won’t be the last. Let me start from the beginning. A great friend of mine, Icelandic fishing guide Steve Mason who runs Icelandic Fishing Adventures, called me up some time ago and asked me if I fancied a trip to Iceland. There was no way that I could turn down that offer. 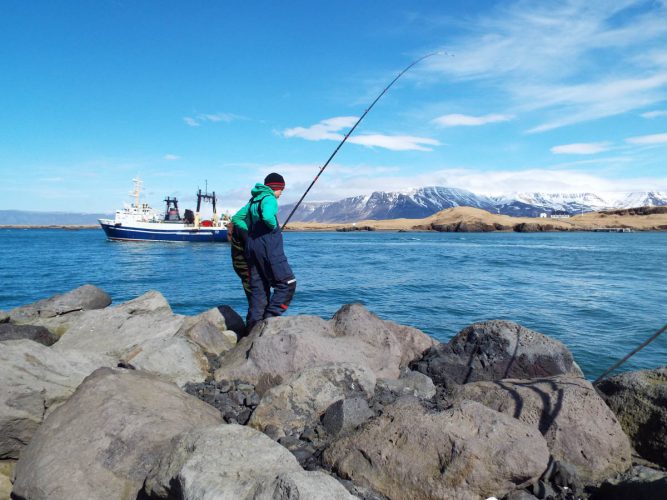 The trip exceeded all my expectations and resulted in the fishing experience of a life time, in addition Steve was a great host and his shared knowledge taught me so much about Icelandic shore fishing. I returned to England with new ideas for my fishing here at home and it has certainly paid dividends.

Steve has always kept me up to date with reports, of great plaice and cod fishing they are now experiencing plus a few of those big toothy wolfish. So when he asked me to join him on an early season fishing trip, my bags were rapidly packed and looked forward with anticipation.

I met up with Joe Mcdonald to travel to Iceland; Joe is a co-ordinator for Icelandic Fishing Adventures in Great Britain. We travelled to Iceland together and with a flight time of only 2½ hours it wasn’t long till we were heading for our digs just outside Reykjavik in the south west of the island. As it was early in the season the weather was still cold with wind chills of -7oC and winter clothing was essential at times. We met up with other anglers who would be accompanying us on the trip, Sally Owen and Mark Cowell, both Welsh Internationals, Sally’s son Matt Owen, and Dave Lovelock, well known for his EFSA exploits, and father and son team, Lee and Oliver Kucyi from Milford Haven. 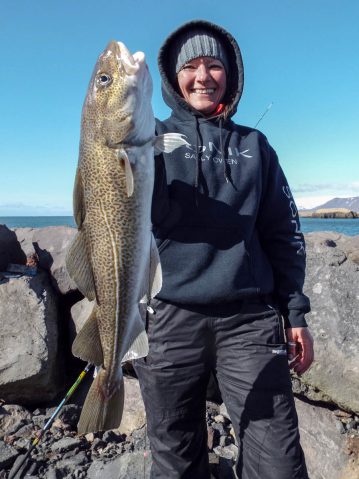 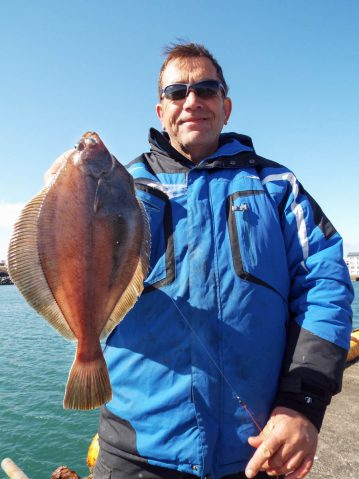 I was hoping to catch my very first wolfish but to be honest the weather was slightly against us. We had to endure strong on-shore winds that were making the rock marks we wanted to fish out of reach. There were still plenty of other species to be caught so if a wolfish turned up all well and good.

Day one saw us heading for a rocky outcrop just outside Reykjavik and hopefully sheltered from the biting wind. The top bait is blueys, this supremely oily, imported bait seem to catch every species of fish in Iceland. The rig was simplicity itself, a 4/0 strong forged hooks on 30lb traces and bomb leads. Yes, just a plain old rolling lead, surprisingly there is hardly any tide run in Iceland even though we were fishing the open sea, so no need for grip leads.

The whole party clambered over the rocks to fish into 40 ft of water, requiring a massive 20 to 60 yard cast, most Icelandic shore marks have deep water under your feet.

Soon codling were showing to all rods, nothing over 5lbs but still great sport in the biting wind. To be honest I was struggling a bit with only one fish for a full morning’s work, but that was just about to change. I baited up with a large chunk of bluey and cast it only a matter of 50 yards. It was a case of holding on to the rod as there was no area to set a tripod up. Ten minutes later the rod bent over as line peeled from the reel, fish on! I played that fish for 15 minutes, and with fingers that had almost frozen to the rod butt, I didn’t even get it anywhere near the surface, although I did manage to get it close to the rocks though. It was a powerful fish and it didn’t want to come in any further, one more powerful run saw the hook trace part and the fish was gone. Probably a halibut and I was really out-gunned with the tackle I was using, but you live and learn and there is always that old adage, “There’s plenty more fish in the sea”. 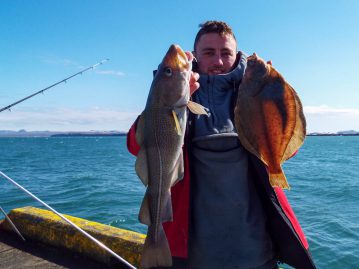 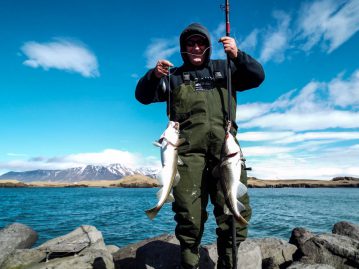 We soon called it a day as the biting wind had taken its toll on all of us and we headed for the warmth of our chalets for a hot shower and some dinner. The evenings in Iceland this early in the season are long and back at base the bar was open until we decided it was time for bed. And so the beer flowed and so did the stories.

Mark and Sally are both Welsh Internationals and fish matches almost every week on their home turf, and Mark can tell a story or two. Joe is well known in the North-East and for running the famous South Shields Open for many years and in recent years has moved down to my neck of the woods in Essex. This is where I met him and we have struck up a great friendship and fish together most weeks. Joe has that Geordie wit and matched with Steve Mason our Geordie tour guide, we were always going to be in for some fun. 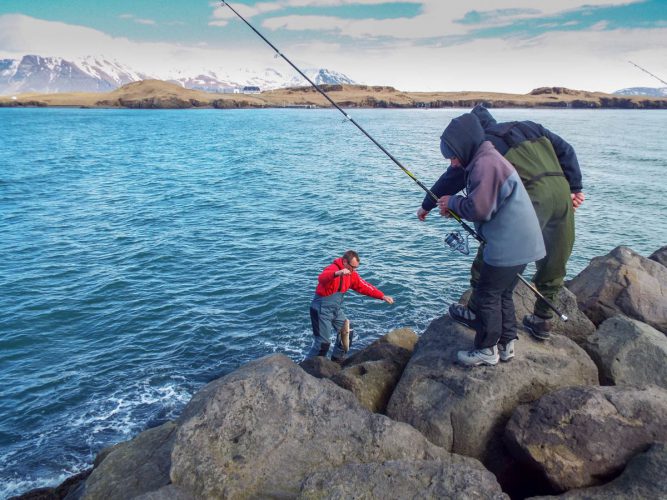 Day two saw us heading to the rocks at Kevlavik but we still had that bitter wind blowing and fishing into the open sea again proved a struggle. As morning turned into afternoon we moved just a matter of yards to a jetty that was protected from the Arctic gales, and all of a sudden things started to look a whole lot better. The sea was calmer and we actually felt a bit of warmth in the sun, and soon we all started to catch fish. Mostly dabs, but when they grow to 3lb plus they suddenly take on a different meaning. Towards the end of the session we all began to catch cod, and with weary arms, we called it a day. But the plan was to return the next day and target the bigger cod and maybe a rogue wolfish.

Day three, what a totally different day, the sun was shining and the wind had dropped, it was going to be a very pleasant day. We were soon winging our way back to Kevlavik and the jetty, most of us opted to fish from this area, but Lee and Oliver “Oly” Kucyi headed for the rocks just the other side of the jetty. 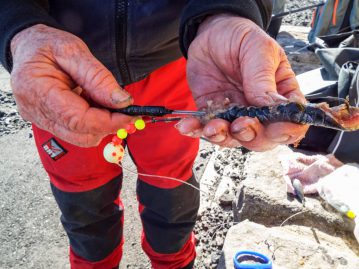 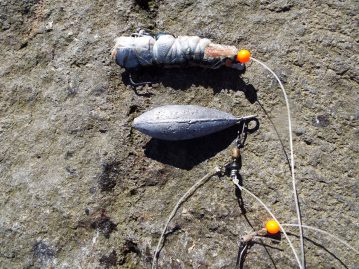 Within ten minutes of fishing we were all in to fish. Dave captured a stunning and very large scorpion fish, Sally landed her first ever starry ray while Lee and Oly were catching cod from the rocks like they were going out of fashion. I was also hammering the cod and big dabs, Joe was casting into the rocks searching for the elusive wolfish. Matt, Sally’s son fishing on the corner of the jetty, was pulling in cod and massive dabs. What a cracking day we had, we had all bagged up, plus a couple of rare catches of a starry ray for Sally and a couple of long rough dabs, a relative of the halibut with teeth to match, one for Sally and the other for Oly.

Back at the chalets and in the bar that night it was all talk of our final day, we were heading for the breakwater at Reykjavik and little did we know it was going to be the day of a lifetime for a certain young angler.

Morning arrived and after a healthy breakfast we headed into Reykjavik and down to the breakwater, and for once the sun was shining, in fact it was positively balmy. The breakwater itself juts out into the fjord for about 300 yards, and at the seaward end there is about 50ft of water. The bait once again was the ubiquitous bluey and there was no need for distance casting with plenty of water at our feet.

From first cast we were soon aware that we had fish feeding and within minutes a steady stream of codling all around the 3-4lb size were being caught. Dave was soon into something interesting with a healthy bend in his rod. We all went over to see what was going to surface. It turned out to be a starry ray which was soon photographed and then returned. It’s not unusual to catch rays in Iceland. Starry rays love deep water and they are well at home here. 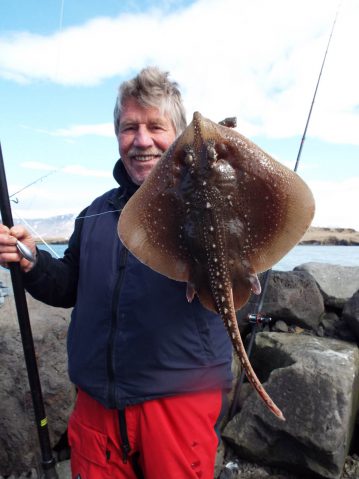 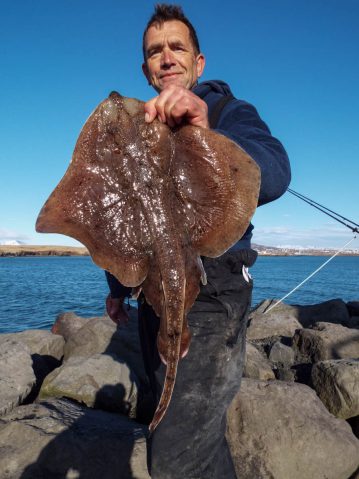 Next into a rod bender was young Oly Kuci from the Milford Haven contingency and his rod was bent double. Soon another ray was laying on the surface, and this one looked a great deal bigger than the last one. Luckily our guide Steve was on the spot and he informed us that we might have a world record on our hands. The fish weighed in at 1.82 kilos and was .5 kilo bigger than the previous record and is in the process of being ratified by the IGFA. 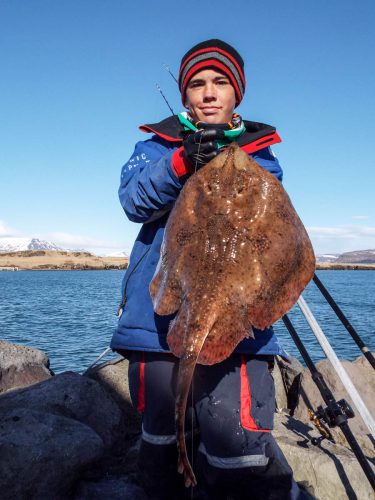 After all the commotion we settled down to another steady stream of cod, when my line fell back slack and I was also into something rather heavy. Not to be outdone I also had a starry ray hanging on and another good fish too. Joe scrambled down the rocks and landed the fish for me, a quick weigh on the scales and my ray equalled the existing Iceland record; what a memorable day we were having. Sadly, all to soon, our final day was over and it was back to the digs to pack away the well tested tackle for the flight home. 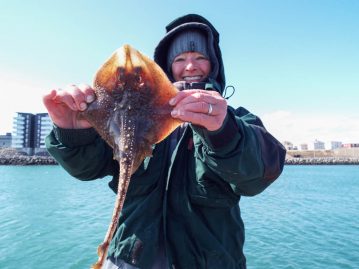 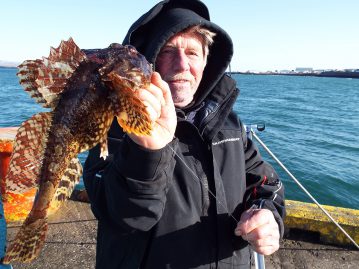 I really would recommend Iceland for a fishing holiday, it will exceed all your expectations and there are fish from every single place that you can get a bait on the sea bed. 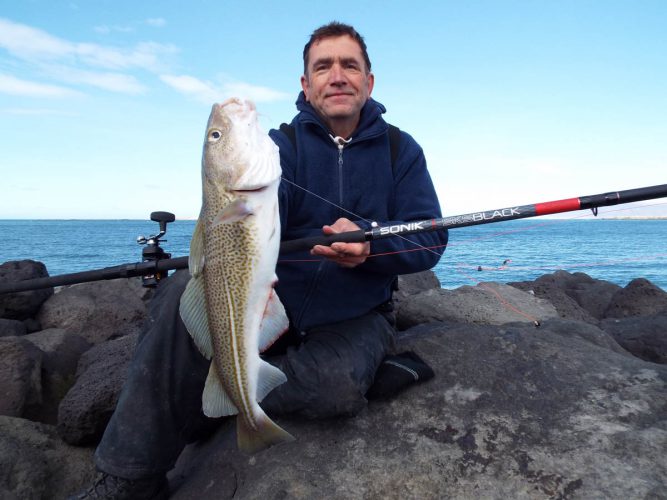 Everything about the trip was extremely well organised by Steve and Joe and you can catch up with Steve Mason on Shore Fishing Iceland on his Facebook page, or you can contact him through on the Shore Fishing Iceland website www.shorefishingiceland.com. On his guided holidays Steve provides all transport and accommodation. Accommodation is in modern, log cabins with hot tubs, situated beside a lake filled with trout and char, which you can fish for in the evenings, If your not too tired of fishing all day! He also supplies rods, tripods, weights and the bait. All that the visitor needs to bring with them is sensible clothing, reels, rigs and line. Steve can also arrange boat fishing at various venues around Iceland and it’s offshore islands.