Young Daniel Dickinson is following hard on father Dean’s heels as he terrorises the beaches of South Africa exhibiting his angling skills.

Born and raised in Port Elizabeth, Daniel started fishing at 18 months when he reeled in his first Cape stumpnose from the Kasouga River and from that day, his drive to fish has become an obsession. 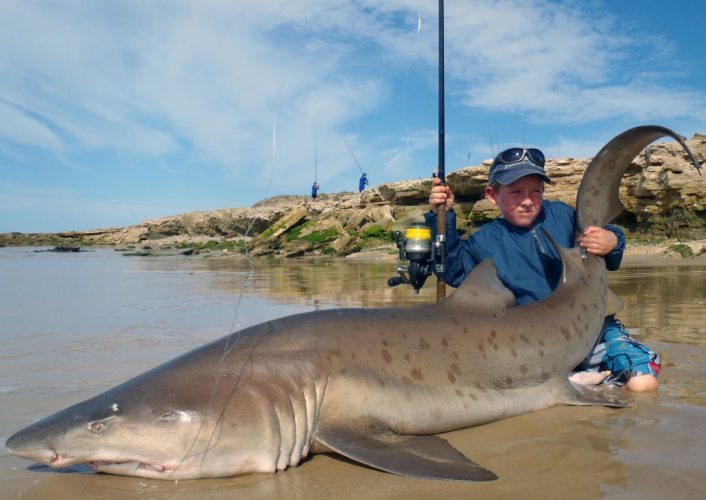 The passion for angling is obviously in the genes given that his dad Dean, who started the Rock and Surf Super Pro league in South Africa, also started fishing from a similar age and is now nurturing Daniel’s talent. His first proper fish was a 2.2kg steenbrass he baited casted and landed unassisted at the age of five while his father was distracted rescuing his rather wet brother 200 metres away after he’d fallen in the river whilst paddle skiing. At the age of seven Daniel won the Junior section of the first ever RASSPL event with a bag which included a 9kg kob. He then followed this success up with a terrific 84kg ragged tooth shark, a raggie, which he tamed unassisted as can be seen in the video.

Daniel fishes every available weekend and during a recent filming for extreme fishing Robson Green was lucky enough to meet Daniel as they fished for bronze whaler sharks.

Competition wise, he won the under-16 division in Eastern Province last season, 2012, at the age of nine and having just turned 10 he is lying in third place in this year’s event. He will be competing in the Junior Nationals next year hosted in February in Jefferies bay where all the Juniors from around the country will compete in the 2014 Final. Two divisions will be competing an under-16 and an under-21 side. Daniel is currently the youngest in the country to have received provincial colours. 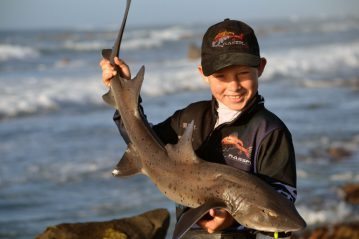 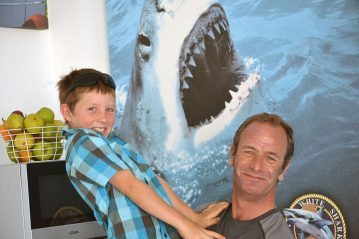 Daniel and his dad headed out the other day to catch bait for a competition and Daniel hooked a ragged tooth shark or known as a raggie locally. He hooked it off a wall so there was no way of landing it without killing or severely hurting the shark so Dean parted the leader by hand to release the fish. He tackled up with a whole mullet for bait with 50lb braid on a Shimano Stradic 8000 reel and a Shimano Exage 10 foot rod provided by his sponsors, he casts his big baits around 60 metres out. 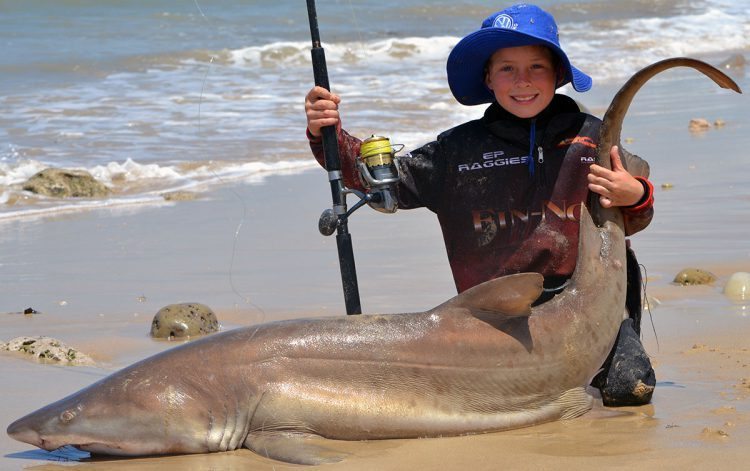 The pair joined fifty other anglers to fish a triangular competition at Van Der Riets. Over two tonnes of sharks and rays were landed between the three competing clubs. Daniel landed the biggest raggie of the day in his total bag of 109.4 kilos. Dean had a good day himself when his 280.6kg bag of ten raggies saw him finish runner-up. The top score individual score was 315kgs for the day, not a whiting bash!

Since the Start of Daniels fishing career he has landed over 30 species of fish in excess of 1kg. This includes a Garrick of 6kg a Stone bream of 41cm a current RASSPL senior SA record. He also broke the current South African junior Blue ray record with a fish of 15.1kgs unclaimed. I am sure over the next few years Daniel will be rewriting a good few of the current under 16 records. This young angler has an amazing fishing career ahead of him. 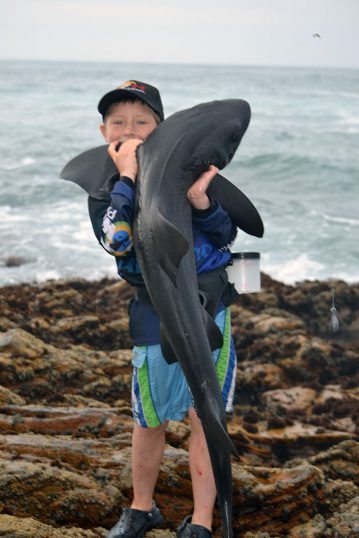 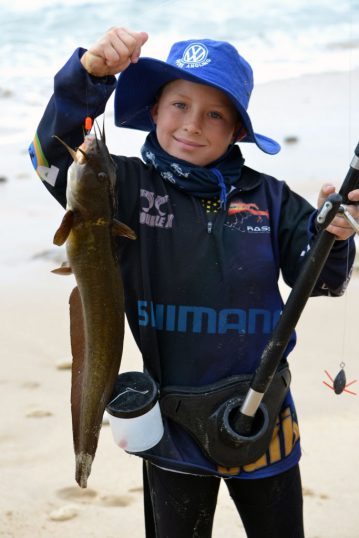 The gallery below show cases some of the great moments in the fishing life of this young, future Springbok.

Fish Aldeburgh with From theWaters Edge