Angling adrenaline junkie, Bruce McDonald visits the incredible location of Ascension Island in the South Atlantic Ocean where he successfully battles yellowfin tuna from the shore, and locks horns with a whole host of other tackle-testing species.

Two mad friends and I arrived on Ascension Island at the ungodly hour of three in-the-morning, following a 9-hour flight and after a killer 19-hour delay. Friendly islanders greeted us on arrival and whisked us to our idyllic rental bungalow positioned right by the sea. Because we hadn’t collected our 4 X 4 vehicle yet, we opted for the short walk down to the closest piece of beach and began fishing in darkness. 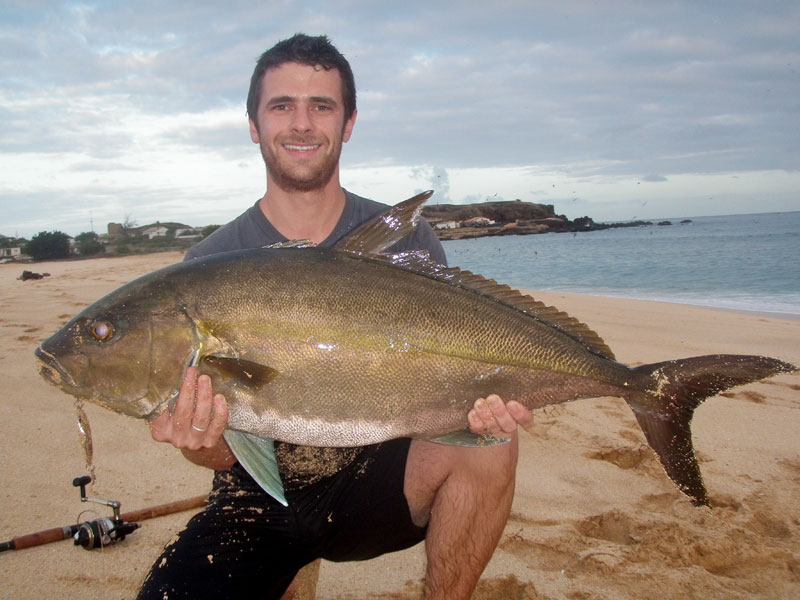 I set up with my trusted Conoflex 20lb class travel rod and Fin-Nor 6500 reel loaded with 65lb Sakuma braid and 100lb Sakuma rig body leader. The business end was and a dirty great Dexter Wedge, which I had refitted with strong Owner split rings and an 8/0 Manta Extra hook.

The dark hours brought a few squirrel fish and one small black jack to my rod, but things would get a whole lot more exciting as the makings of daylight cracked the skyline. As the first tendrils of light filtered through the low laying clouds clearly larger predators began to savagely hammer bait schools right in front of us. Left and right of our standing positions violent vortices erupted all along the shore with frantic scad fry scattering everywhere. No second invitation was required as we cast our lures straight into the bursting melee. The action was instant and all three of us found ourselves attached to fierce-fighting 15lb plus black jacks simultaneously!

After mixing it with a several of these of these brutes I ventured to the centre of the fiercest action and cast my wedge just to the outside of the continuing carnage being endured by my two colleagues. I barely managed three quick turns on the reel before everything went rock solid and still… for maybe half-a-second! The next five seconds or so saw something close to 350yards of line ripped from the spool, which was cleared down to the backing faster than I would have believed possible.

Panicked and desperate, somehow I managed to turn the fish just before the spool emptied completely, and began pumping back line. I gained the upper hand after what seemed like an eternity of physical torture, and 35 minutes later, my first yellowfin tuna – all 50lbs of it! – was safely tailed and wrestled ashore. My head just wouldn’t stop spinning and if ever there was a sure way to banish travel weariness then this is definitely it. 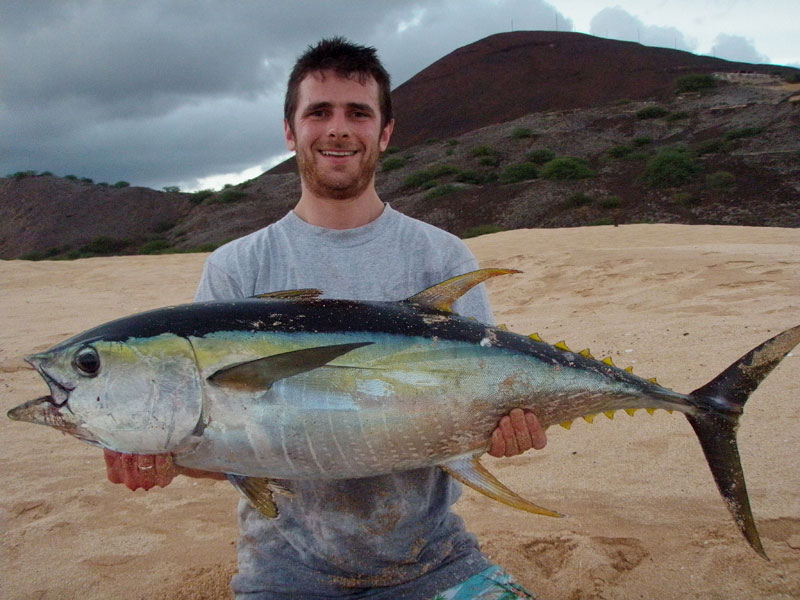 We would eat an awful lot of lovely fresh tuna over the course of this week, and I bled the fantastic eating fish before returning to fishing. More black jacks, rainbow runners, amberjack and almaco jacks relentlessly filled the rest of the session. I had only been here a few hours but already this was shaping to be an incredible fishing holiday!

The next six days took on a familiar pattern – up at 05:30 to fish first light and catch somewhere around 300lb of meaty fish each then back to bed, before doing it all over again in the evening. Several rums before sleeping help ensure ensured complete collapse at bedtime!

Fishing tactics were kept the same for the whole week, with just a few sessions deviating to surface-popping for powerful amberjack and black jacks. My friends switched over to live scad tactics and were well rewarded with better tuna catch rates. I was content spinning away for a colourful assortment of brawny species, with double figure fish crashing into the lure almost every cast. 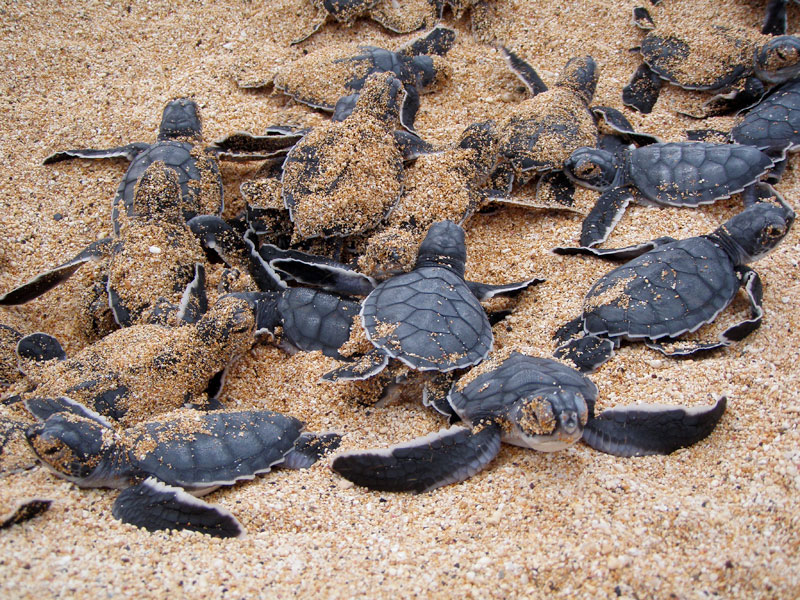 Personal highlights of a wonderful week included a 25lb amberjack on spinning gear, an 80lb tuna from the boat, three 35-55lb class tuna from the shore, and seeing a whole clutch of baby turtles hatching out on the beach before our eyes – this incredible experience is something I will never forget. Ascension is a truly incredible place of raw nature, and words struggle to accurately relate the sights, sounds and ‘wildlife documentary’ experience of the location.

Luck of the English

Conversations with some local people revealed that we had been incredibly lucky with our shore fishing as the bait shoals had apparently not been in so close to the shore for four years. Indeed, some keen Americans from the airbase were convinced that we had some inside information!

There are plenty of other prospective fishing targets to occupy any shore or boat anglers not lucky enough to plug into the amazing tuna fishing. Take for example the opportunity to lock horns with monstrous six gilled sharks weighing more than 1000lb and blue marlin from the boats, and a great general shark fishery around the Island. The shore fishing is just fantastic in terms of the size and power of the fish but also in the great variety available. Black jacks are the majority specie for sure, but I enjoyed others such as rock hind grouper and moray eels among other exotics from the ease and comfort of the shoreline. And we didn’t really even scratch the surface. 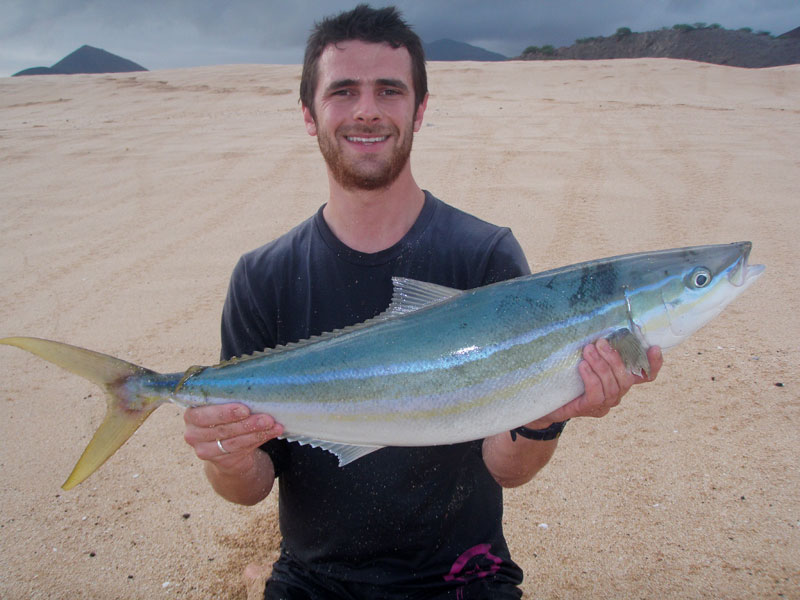 We didn’t have a chance to visit the legendary rock marks on the back of the island boasting a staggering 300ft or more of water right under the rod tip. Here, likes of dorado, wahoo and even marlin and sailfish are a realistic possibility with feet planted firmly on the shore… incredible! Safety should be considered at all times however, and great care is needed on every venue on Ascension. In the first instance the severe undertow is lethal, and with monstrous shark cruising the depths this really isn’t a place to slip or be up-ended into the sea.

For anyone thinking of planning a trip to the South Atlantic, a phone call or email to Conoflex to discuss ordering the superb 20lb and 30lb line class Travel Sticks is a good idea. These rods are absolutely spot on for this type of roaming fishing for big fish. The Travel Sticks pack a whole lot of punch, are compact, affordable and won’t let you down. 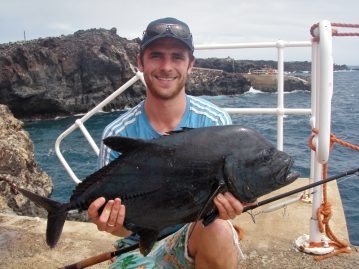 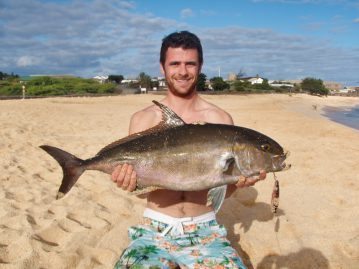 Reels need to be as strong and reliable as they come. I took two excellent Fin-Nor models purchased from Weymouth Angling Centre, and these absorbed everything these crazy fish could throw at them and more besides. I used a majority of Sakuma gear on this trip including hooks, swivels and braid all of which performed superbly against some of the toughest fish.

Ascension Island is a special place and I doubt I will ever experience fishing like this again as long as I live. Figures are perhaps meaningless here, but just to illustrate a sense of scale, three of us landed something close to 3500lb of wonderful fish in seven days, and this does not include all of the tuna caught at
sea from the boat. If this brief account has fired a far-flung imagination and roused the adventurer in you then I urge you not to think twice about visiting this epic angling paradise.

Where on the island can you access 300ft of water from the rocks?

Check out the chart – https://webapp.navionics.com/#boating@10&key=dbqo%40p%7BlvA