Lugworm is without doubt the king of worm baits. Here Steve Walker delves into the world of ‘blows’, ‘blacks’ and ‘yellowtails’. 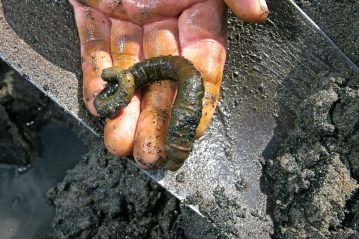 Lugworm are extremely common around the British Isles but reference books often wrongly describe a single species: Arenicola marina, or the common lugworm. In 1993 researchers from Swansea University recognised what anglers have long known and reclassified Arenicola to include a new species known as Arenicola defodiens. Anglers know these two lugworm species as blow lug (Arenicola marina), and black lug (Arenicola defodiens). At a seminar at Dove Marine Laboratory, Tyneside a few years ago I was informed that there are at least another two types or sub-species of lugworm present around our shoreline. All of these lugworms have segmented, cylindrical bodies which have two distinct regions. The top, thicker thoracic part of the body has bristles known as chaetae, with the last thirteen segments also having feathery gills. The thinner abdominal part of the animal has no bristles or gills.

Blow lug are commonly found on the upper and mid reaches of a beach. They are often present in large colonies and are normally easy to dig, as they do not burrow too deeply. Colouration can vary greatly, but dark red and pink worms are common, while in some areas and on certain shorelines blow lug can also be dark brown and even black. 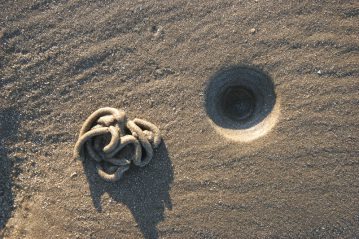 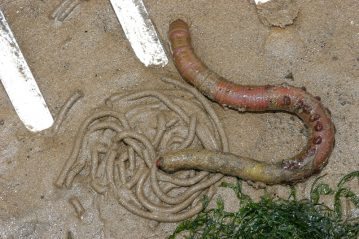 Blows are much smaller than blacks as a rule, rarely exceeding 20cm. They live in U-shaped burrows and their casts are often large unordered piles accompanied by a noticeable round depression in the sand. Large colonies of immature blow lug are often found in nursery areas near the top of a beach. Genetic differences between blow lug and black lug (blacks) may be scientifically difficult to identify, but anglers recognise immediate differences in colour, size, and the type of cast. Black lug vary from dark green or deep brown, to jet-black in colour, and can grow to a size of 40cm or more. Their signature casts are usually displayed as a small neat coil, but sometimes the cast is no more than an innocuous little surface blob that is easily missed. 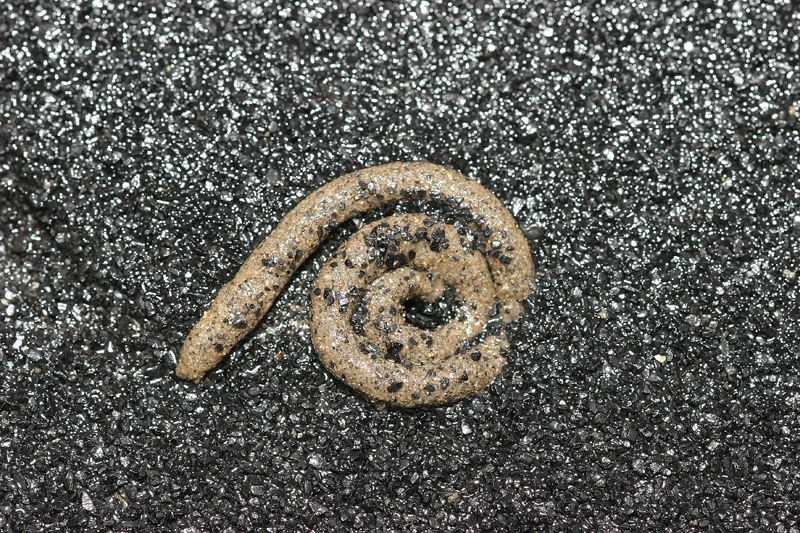 Blacks are usually found at the lowest reaches of a low tide and can burrow to considerable depths. When handled, pronounced yellow stains are left on the fingers. Blacks are not as common as blows, and are harder to extract. Unlike blows, black lug casts don’t have an accompanying depression as they live in a much deeper, straighter more J-shaped burrow. To confuse matters there is also the lugworm known to anglers as the ‘yellowtail’ or ‘browntail’, which also leaves a powerful yellow stain on the hands.

This worm tends to live in the mid regions of a beach, it has been speculated that they are immature black lug, and also a different species altogether. But you can be secure in the knowledge that all lugworm catch fish. Blow lug are the ones that you are most likely to buy ‘live’ in tackle shops, as they are more readily available and easier to dig. Fresh blacks or ‘runnidowns’, as they are known in the north (they have numerous other colloquial names around the country), are much more difficult to acquire. They are only usually available from tackle shops by special order. However, many shops carry frozen blacks.

If you want to dig your own blacks it is relatively straightforward once you have located them, but much depends on the type of ground they inhabit. Blacks will only usually be available on big spring low tides’ and are usually only dug one at a time. Occasionally you may be able to trench two or three out of a single hole before moving to find another cast. Because they lie deep, a spit trenching spade is better than a fork. Identify a suitable cast on a dry area of beach and dig alongside the cast. Then, carefully dig away the cast to reveal the hole left by the worm. Dig down, following the worm’s tract until the tail is exposed. Dig the worm out in one go if possible. If the tail section is only just revealed, as often happens, you will have to get down and extract the worm by hand. Thrust your hand into the wet sand and grab hold of the tail. Next, work your fingers along and find the thicker body. With a safe grip on the worm, carefully draw it out. It is not unusual to see diggers with nearly their whole top half down a hole trying to pull a worm out. 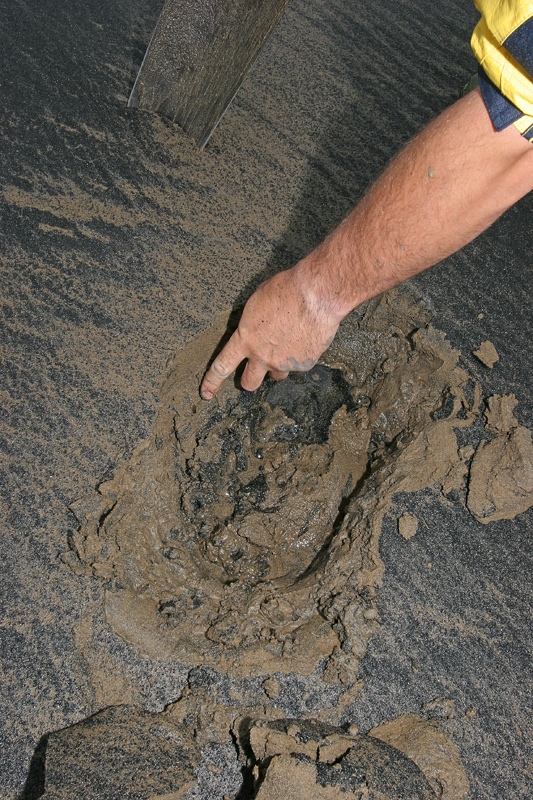 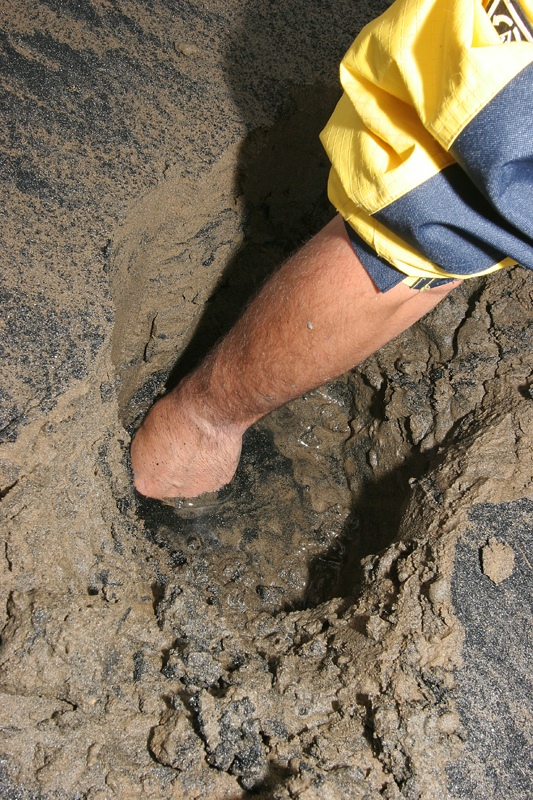 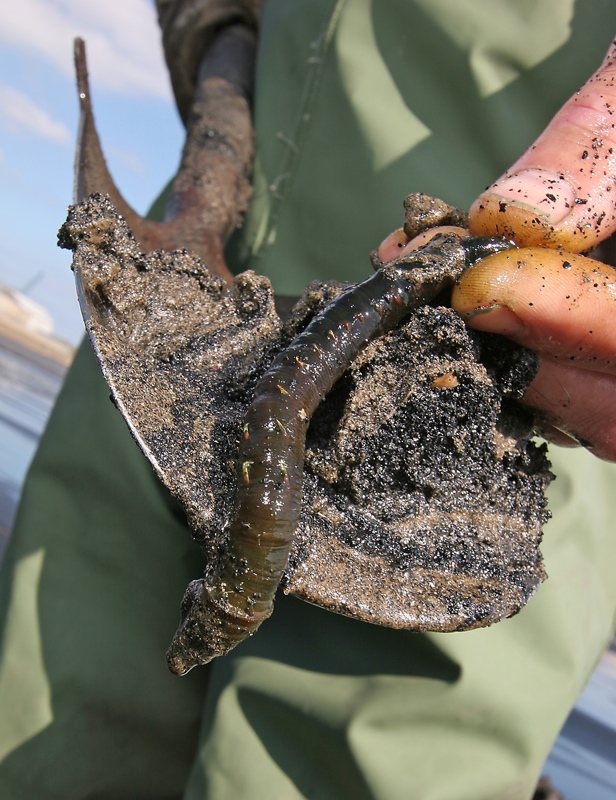 If a beach is heavily waterlogged, and the worms deep, then digging plays second fiddle to a bait pump for efficiency. It is possible to use a bait pump to extract worms other than blacks that inhabit a more-or-less straight burrow, but it takes practice to get right. Most anglers trying a bait pump for the first time make the common mistake of taking the pump to the worm, rather holding the pump steady just a few inches below the surface and drawing the worm up to the pump. This error normally results in the worm being cut in half.

Pumping is more effective when the ground is wet and suction better. Indeed sometimes it is necessary to pour a bit of water down the hole to achieve good suction. Whether dug or pumped many blacks will often blow their innards when exposed, and they do require attention to keep them in good condition. Two buckets are needed: a larger main bucket and a smaller one to fit inside this to keep damaged worms in. The blown ones can be wrapped in newspaper and used immediately, or frozen for use later. 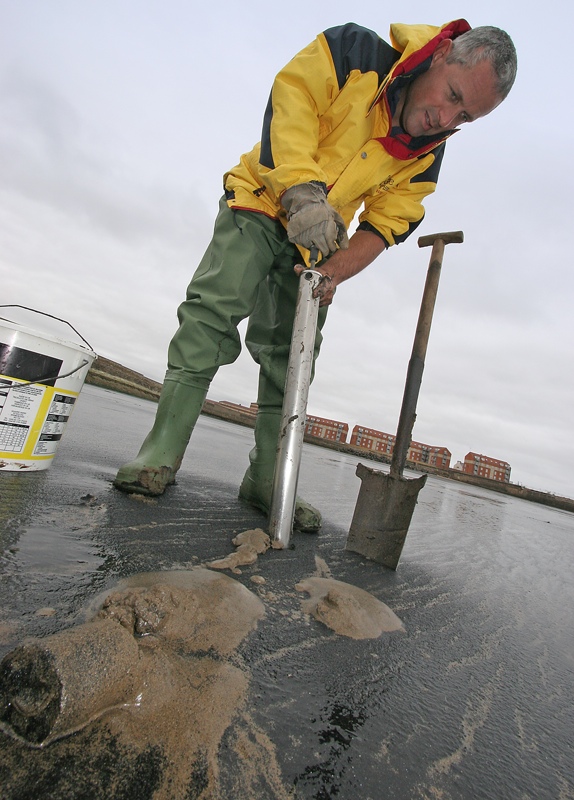 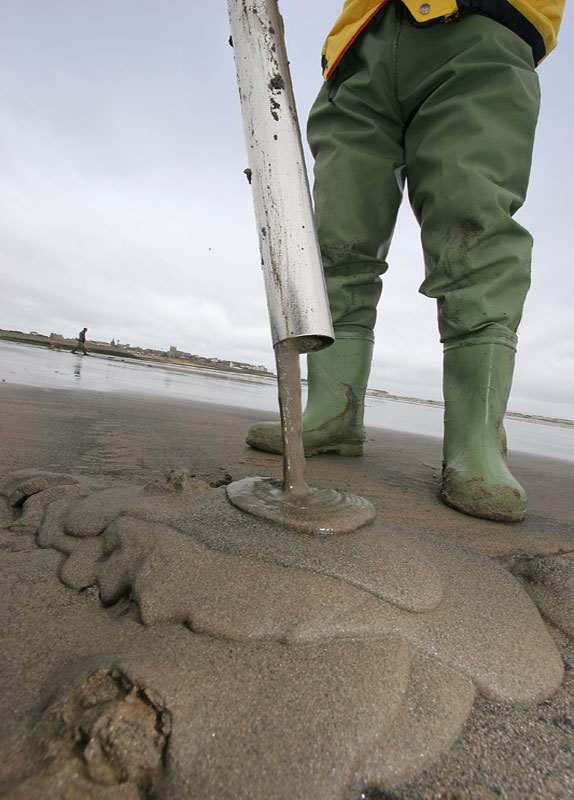 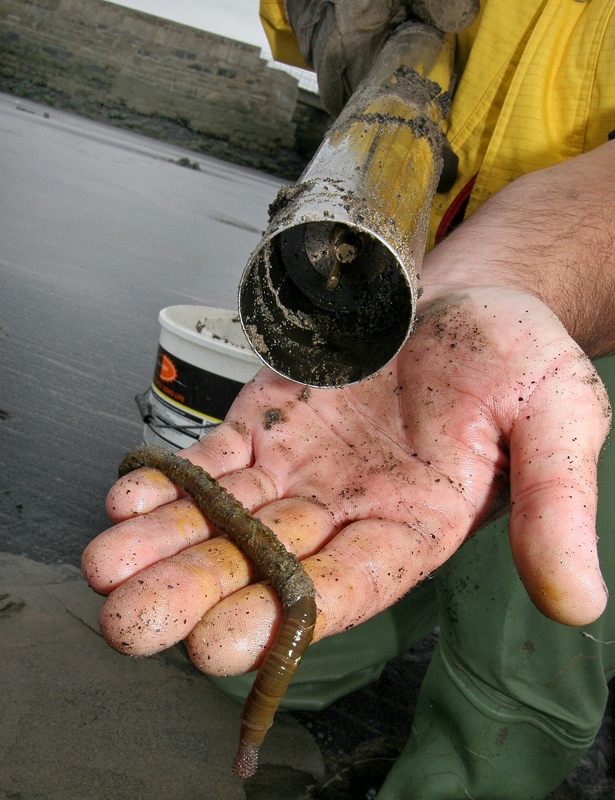 Live blacks are kept in shallow trays in a fridge. Care must be taken not to overcrowd worms. I change the water once a day: just a few millimetres are needed. It is important to keep a careful eye on your worms, removing and freezing any that start to look iffy. If a worm bursts, and you get to it too late, the other worms in that tray will quickly follow suit. When freezing, first wash the worms in fresh water before leaving them to dry for a few minutes on paper towels. My method is to next wrap them in absorbent paper, which soaks up any remaining body fluids, before placing on a metal tray in the freezer until fully frozen.

I then wrap five at a time in cling film and pack four parcels of five worms into a sealable sandwich bag. For fishing, frozen worms are carried in a wide mouthed food flask. Some anglers prefer to ‘gut’ their blacks prior to freezing by squeezing out all of the body contents. Prepared thus, defrosted worms resemble tough sticks of liquorice. My personal preference is to keep the guts in, as this is a strong source of scent. There are no hard and fast rules however, so by all means experiment.

Dense colonies of blow lug are very exploitable with the correct tool. They are best trenched using a flat tined potato fork. Digging is a simple matter of locating a good concentration of casts and cutting a trench around four spits wide just in front of the cluster. With the dig open, proceed to dig back through the identified area, depositing the spoil from each spit back into the previously dug portion of the hole. The technique is called ‘back-filling’ and is best demonstrated by an experienced digger. This serves to fill what can be a large, ugly hole, but it also prevents spoil being slung all over the place and covering evidence of other casts. Successful digging very much depends on reaching the correct depth where the bulk of worms will be lying. Dig too shallow and not only will worms be missed altogether but there will also be an unacceptable number of casualties as a result of fork damage. 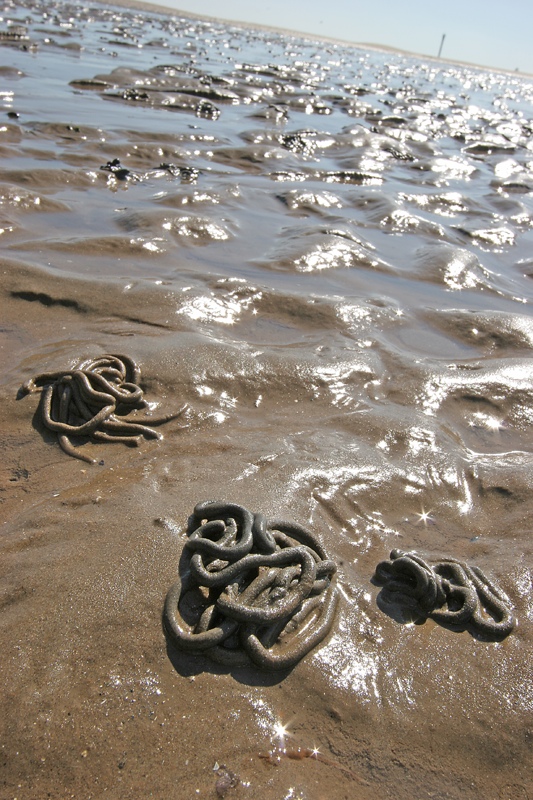 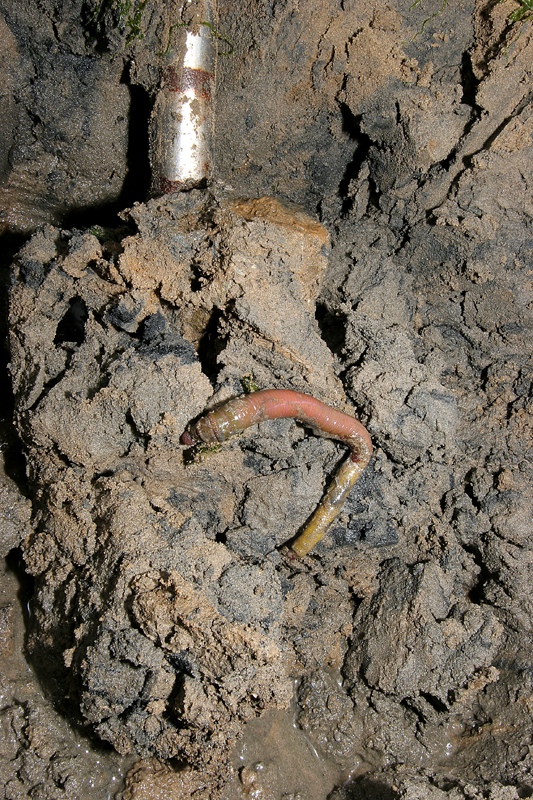 Ordinary blow lug are kept simply in fridged trays with just a shallow covering of sea water. With regular water changes they will keep without complications for two weeks. If there isn’t enough space in the fridge, blows are usually quite happy just placed on the garage floor, covered with something suitable to keep them in the dark, although this is not recommended in the height of summer.

I firmly believe keeping worm baits in the dark contributes to them lasting longer… there’s not any light at the bottom of a lugworm burrow after all. For a fishing session, a few handfuls of blows are placed onto sheets of newspaper in the bottom of a bucket. They will stay quite healthy like this as long as they are kept out of the sun, and unused worms can even been returned to the fridge.

Black lug are hard earned and require careful handling. Try not to disturb blacks any more than is absolutely necessary. Quite often as soon as you pick them up they will burst. Work out how many worms you can expect to use in a session and budget accordingly. Place just two or three worms onto individual paper hand-towels, and layer these into a suitable container. Disturbance or hand-heat will cause precious worms to burst, forcing you to freeze them. Frozen, they are still very effective but fresh black is far superior.

Lugworms are the classic winter cod bait and there are situations when fish won’t look at anything else. Lug is effective for most species, but whiting and flatfish show a particular liking. Black lug is regarded as superior to blow for cod. One or two big runnidown worms tipped off with whiteworm or clam is a classic North East cod bait that takes some beating. Lugworm is often best cocktailed with another bait. Indeed strategic tipping lug with the likes of mackerel, squid, clam, mussel or peeler crab can prevent worms slipping and clogging the hook, so long as elastic thread is used to whip the bait firmly in place. Bait slippage is not so pronounced with tougher fresh black lug, and more often applies to frozen blacks and softer blow lugworms. There is always debate about whether to hook lugworms head first or tail first. When hooking multiple smaller lugworms to form a large bait, I don’t think it matters. However, when hooking just one or two blows, or a single big black lug I always put the hook in tail first, so that the point exits through the juiciest part of the worm. 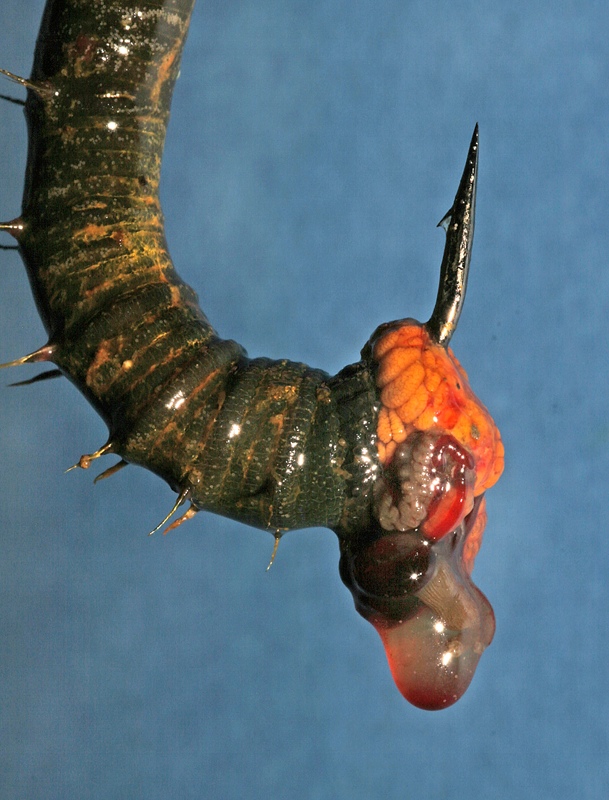 Scientists have long recognised the need for an efficient, non-toxic, oxygen carrying protein molecule, which could bring huge medical benefits. A research team at Newcastle University have identified how oxygen-rich blood extracted from lugworms could help the recovery of cancer patients, stroke sufferers, and accident victims. For lugworms to survive in the low oxygen environment, which exists between the tidal ranges on beaches, their blood has 156 oxygen binding sites, whereas human blood has just 4 sites. Trials on mice have shown that flooding healthy cells with oxygen helps them fight cancer. Patients would benefit by having more oxygen pumped to the brain and other organs to aid recovery. Boosted oxygen also protects transplant organs in transit, and helps combat rejection after the operation.