The past seven days have been a big tope week for the boat angling lads. They have never been seen in such big numbers and sizes, with the average being 30lbs and five over 50lb to 58lb that have been reported.

This time of year the tope tend to come much closer inshore, especially the females as they are dropping there pups off in shallower water where it is safer for survival.

Anglers on the wall have been catching the pups so I think this is may be what has happened but still in these numbers of tope is unprecedented.

I personally went out Saturday night after work for a few hours with a couple of the lads and between two boats we had over 30 tope runs, and around 20 landed to in to the 50lbs mark. Bear in mind this is two hours fishing and five anglers. Whole mackerel as bait fished on 6/0 wire trace rigs was the way to catch them. Nothing fancy was needed, there were so many runs that you couldn’t keep more than one rod in the water each. At one point Nathan Berrie and myself had a 30, 40 and 50lb fish in the boat at the same time. Hope they stay around for a while as they provide the best sport fishing we could possibly ever get. 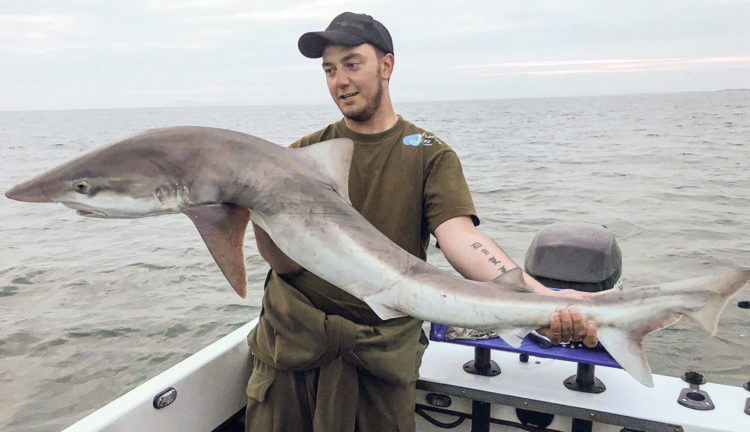 Nathan Berrie with a huge 50lb plus tope

Fleetwood and District Angling Club found it hard going as half the anglers blanked at Cleveleys over low water. Some parts are very rocky and quite a bit of tackle was lost and it is also shallower up by the cafe. Those who did manage a more manageable area were rewarded with a few fish. Only dogfish and smoothhound were caught. Crab was the top bait, but fish bait and worm also took dogs.

The winner today was Frank Towne with three smoothhound for a total of 171points. In second place was Barry Critchly with two hounds for 140 points. Craig Thompson was third with five dogs and a small smoothy for 138 points. Hughie Porter, Ray Rodger, Bob Egan and Phil Lamb all had one dog for 22 points. Next week’s match is at Beach Road so hopefully less lost tackle.

The largest fish was the bass (39cm) caught by Ian Hewitt worth 27 points. Fishing was patchy with the better catches up river of Wardleys Creek but all anglers caught. As would be expected the most productive bait was peeler crab. 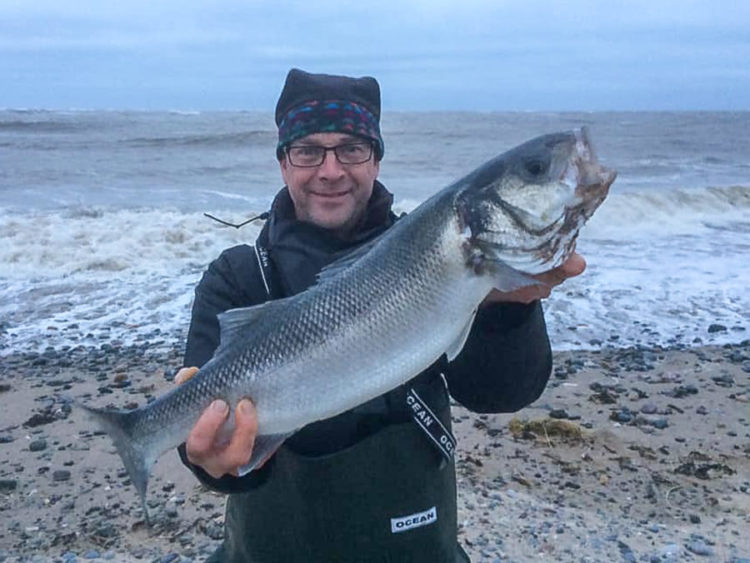 Dave Brown with a 6lb bass caught on yellow tails

Leyland and District Sea Angling Club had their latest match at the Sea Cadets, Fleetwood.

First was Brian Nixon with the only fish of the day an 83cm smoothhound which won him the biggest bag and the biggest fish!

The raffle winner was Martin Darwin and no one won the “golden peg” card. Thanks to everyone who turned up and braved the wet weather.

The sea fishing on the shore has proved patchy but good when you hit it right. Still lots of bass around to very good sizes, sole, turbot, smoothhound, dogfish, dabs and whiting. Peeler crab, blackworm and ragworm are still the most productive bait along the coast.