We bathed in glorious sunshine at the weekend and with calm seas the boat anglers took advantage of the conditions. Early summer will see the tope packs move along our part of the coast, they are still a few miles out but those anglers willing to put in the distance have caught tope to over 50lbs.

Last year the tope packs moved into within a couple of miles of the shore, so let’s hope they do the same this year.

Darren Hutchinson and Kevin Redman fished from their boat Black Marlin and made the long journey out to fish off the Clacton coast. They caught some very big tope with Kevin landing the biggest weighing in at 53lbs!

Plenty of mackerel also showing to the boats, it’s a case of finding the shoals and be prepared to be in for some bumper sport.

Alan Tipple and Sandie Davis fished out from the Gunfleet Boat Club ramp and picked the hottest day of the year so far, but still the fish were feeding. They caught smooth hounds to 8lbs plus seven bass to 4lbs with plenty thornback rays and dogfish to add to the catch. 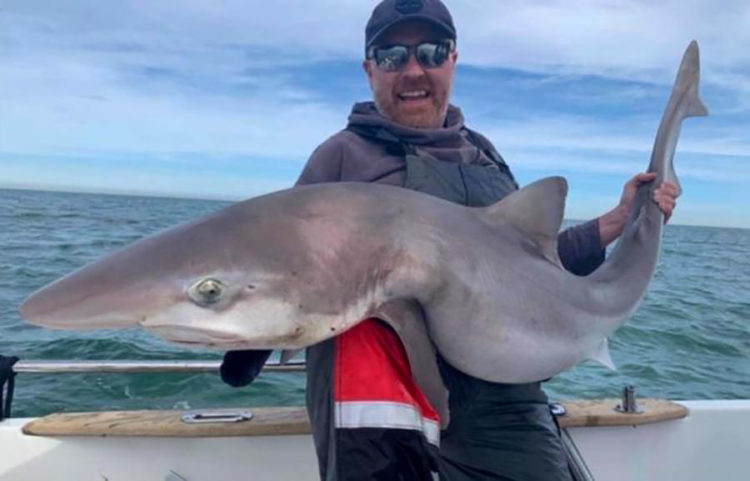 The beach angler has had a fairly quiet week, the bright sunshine and clear seas has seen most fish during daylight hours head out into deeper waters. So best chance of a fish or two is to fish evening into darkness.

My trip this week was with father and son team Lee and Oly Kucyi from Milford Haven who I had met in Iceland a couple of years ago. I had promised the pair a fishing trip in search of our famous Essex stingrays. We had a great day on the beach in the sweltering heat catching bass and young Oly caught his first stingray, so the trip was well worth it! 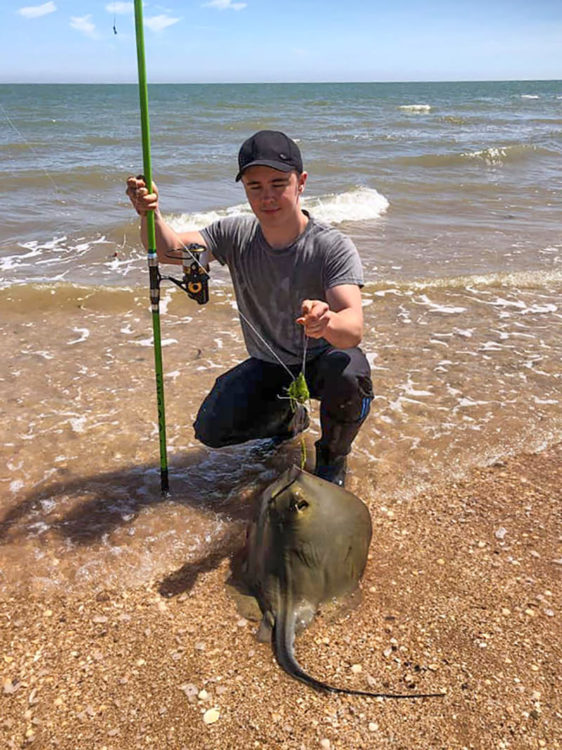 Oliver with his stingray

The Holland beaches have been slow this week, daytime tides are seeing a few school bass from around the rocky breakwaters.

Walton Pier has also slowed somewhat with a few thornback rays from the top of the pier, although fishing down by the piles with light tackle will see wrasse, pollack, garfish and bass being caught.

Walton Sea Angling Club fished their latest evening match on the pier with most anglers opting to fish along side the piles for the smaller fish.

The Walton and Frinton beaches have seen a few sole and school bass after dark, the ebb tide here has been a problem for anglers with lots of floating weed laying heavy on the line.

Colchester Sea Angling Club headed to Suffolk to fish the Dunwich beaches for their monthly league match. 15 anglers fished on a dry but overcast day and expectations were high for some good catches.