The Marine Accident Investigation Board have released a report on the capsize of an unnamed Bayliner Capri 2000 speedboat resulting in the loss of three people off Lowestoft on 10 March 2014. The report provides a salutary warning for all small boat users, get the correct safety equipment and make sure that you use it when at sea, this accident happened only half a mile from shore.

On the morning of 10 March 2014 three men set out from Great Yarmouth in a 5.7m speedboat with a deteriorating weather forecast to recover fishing gear they had laid on the previous day. 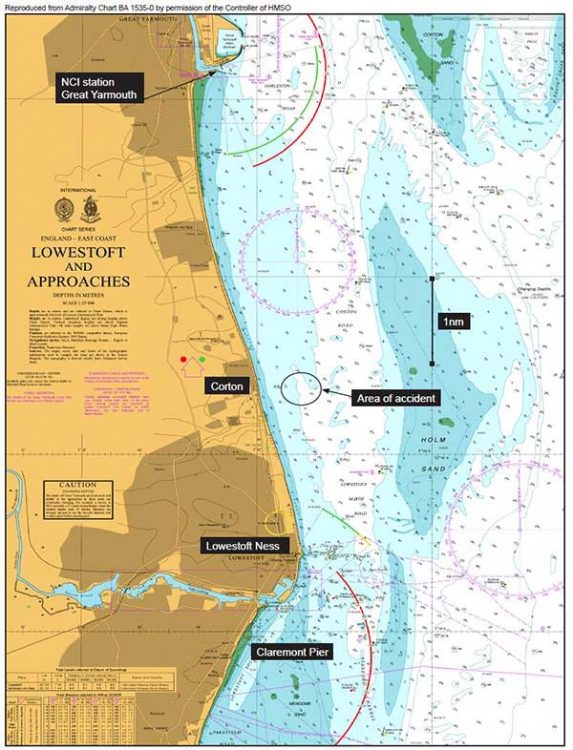 The men were recreational fishermen but had little recent experience of operating a boat at sea. The boat was not equipped with a VHF radio or distress flares and the men were not wearing lifejackets or thermal flotation suits. The boat had a low freeboard at the stern (36cm) and there was an opening for engine control cables 26cm above the waterline. While the men were recovering the gear the propeller became fouled by rope and in worsening conditions water probably entered the boat, which led to its capsize. The sea temperature was 6ºC.

The alarm was raised when debris was seen off the coast near Lowestoft and despite an extensive sea, air and shoreline search only the body of one of the men, who had been the only one wearing a buoyancy aid, was recovered.

The report found that:

The full report on this tragedy can be read here.

Following its investigation into the loss of the fishing vessel Achieve, in January 2014, the MAIB issued a Safety Flyer to raise awareness of the use of VHF radio with the DSC function. This flyer is available on the MAIB’s website.

In addition, the Chief Inspector has written to the editors of major sea angling publications, asking them to promulgate the lessons from this accident.