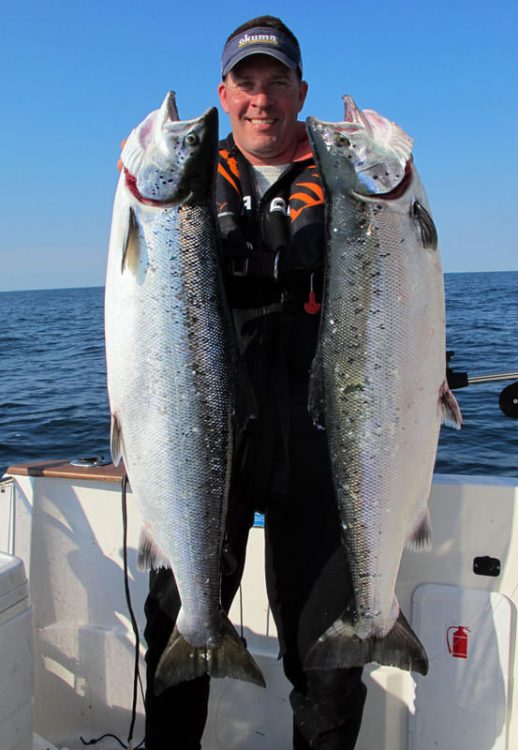 Many European anglers may not be aware of the fact that the Danish coastline sees a run of saltwater salmon which fall to trolled lures at this time of year.

Christian Moeller and Henrik S. Lund spent the Easter holiday break on another one of their radical fishing expeditions. This time, they went trolling in the waters of south east Denmark, and they enjoyed some extremely good fishing that seemed to just get better and better.

They found some hungry schools of salmon, and even though finding salmon doesn’t necessarily equate catching salmon, the two master-anglers hooked up with and landed 14 chromers!!! An incredible feat!

The fishing was red hot, and the salmon were hitting Savage Gear Herring Spoons without hesitation. They all delivered furious, adrenaline-packed fights, and the biggest of them were fat 10 kilo+ fish with a 12,5 kilo muscle-rocket on top.

The Herring Spoon is available in two different lengths: 11 and 14cm (19 and 30grams) and in nine different and super-effective colours.

Savage Gear product manager Mads Grosell heard of the fishing, and dropping everything he packed his lure tackle and was on the spot the following day.

This day, his company’s Flat Jack lures made a difference. Lots of boats were out, but the fishing was difficult, and the fish weren’t hitting any old lures. Nonetheless, Mads and his fishing buddy managed to land a whopping nine silver salmon with the biggest of which weighed around 11 kilos! The ever-efficient Herring Spoon once again proved too alluring for the salmon to resist, but the Flat Jack (in the Yellow, Green, Orange colour) was nothing short of sublime and stood for the majority of the fish.

The Flat Jack comes in 11 and 13,5cm versions, and six lethal colours are available.

For more info on the lures seehere