Jonathon Hall advises that the Charity Fishathon had to be postponed due to the weather and will now take place this weekend, the 22nd. Full details of the event can be found here. 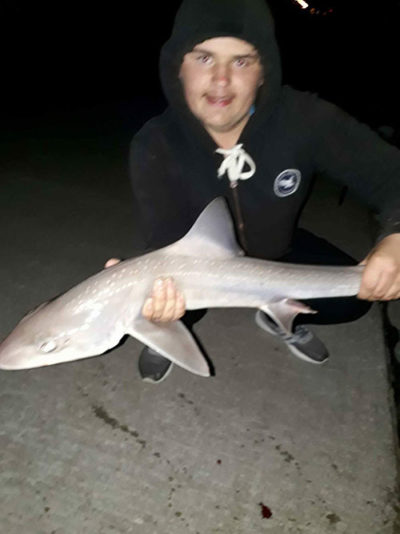 16-year-old Nathan Culshaw landed a personal best smoothhound of over 9lb from the Hole in the Wall cafe just off the Gynn roundabout. Nathan fished at 90 yards using a 3/0 pennel rig baited with squid.

Last Friday night Dave Brown fished in the surf at low water and was straight into fish. He ended up with a nice mixed bag plaice, bass, whiting, tope and dogfish. He landed half a whiting thanks to the attentions of either dogfish or tope. The fish were taken on worm from Jordan’s shop.

Last Saturday Anthony and Marcel Ellison had a session at the Gynn wall in wet conditions with a nicely coloured sea. They landed five different species, bass, plaice, sole , tope and smoothies which all fell to rag and lug worm.

Rick Pennington tells us that Trevor Barnett had a fantastic session winning the latest Flat and Round match on the Gynn. He measured a nice smoothhound of 102cm, estimated between 8 and 9lb. This was backed up by four other fish, two sole, a bass and a tope pup to give him an overall score of 216cm. Runner-up Ray Rodger had a tope and a nice sole for 70cm while Eddie Horrocks won the longest flatfish prize with a good sole of 37cm.

Conditions were quite hard with the weed up until high water but there were quite a few small bass, tope pups, the odd plaice and flounders and only a few cm separated the anglers chasing second place. The fish of the day was a nice bull huss of 76 cm for Tony Baxter which unfortunately won him nothing this time as he couldn’t get a flatfish to go with it. A big thanks to the 18 that turned up, the weather put a few off but after a damp start everything improved. 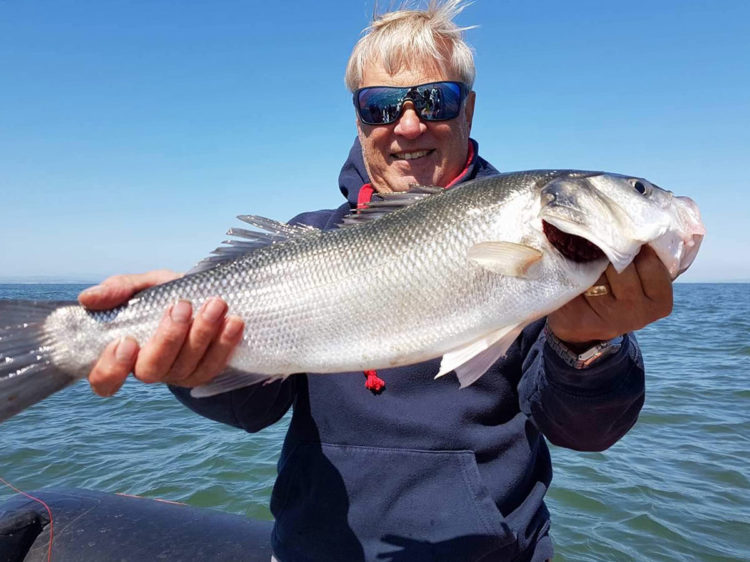 Brian with one of the bass

Mark Yule and Brian Fletcher launched on Monday from Wyre Boat Angling Club and headed north into Morecambe bay. They were rewarded with four fine bass all around the 5lb mark which gave good sport on light tackle.