A group of army collegues from Wales were the latest visitors to the Skarnsundet Fjordsentre where they enjoyed an amazing seven days fishing. The first part of their holiday was based in Skarnsundet itself with the second half entailing a move to coastal area at Bessaker. The forecast promised settled weather and with productive spring tides, things were looking good for the week. Although the group brought ragworm with them, the main bait for the shore sessions was herring. This pelagic species is a top-notch bait in Norway and guide Phill Dale ensures a regular supply of quality bait blast frozen on the catching vessel. 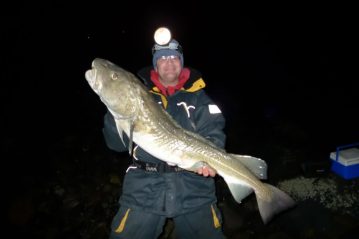 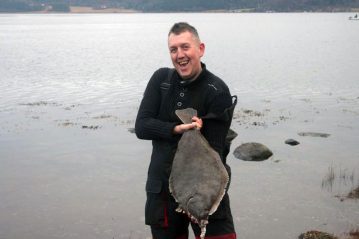 Straight from the off on the first night the action was hectic as the anglers landed cod, haddock, coalfish, ghost sharks and dogfish from the pier just outside their accommodation. There were plenty of cod to keep the rods busy last week, with most of the party landing lunkers into double figures. Best of the cod fell to Stu who landed 27 pound 4 the slipway at Straumen, which has produced some fantastic fish this season.

As well as the cod, the troops hooked into some of the area’s powerhouse coalies that gave a great account of themselves from the shore. Steve landed the best of these that banged the scales down to 14lb but several other doubles were also landed. Light tackle lure fishing proved productive with several decent pollack falling to plastic shads.

Not only does Straumen produce massive cod it also holds some very impressive flatfish as the group discovered during session on their final day before moving on. Steve Billings beached a 6lb 4oz plaice on a rig meant for a cod fished at a distance of only 25 yards. Those who specifically targeted the flats, using black lug as bait, found quality dabs to just under 2 pound mark.

The party then made the trip to Bessaker, which is a 1¾ hour drive from Skarnsundet. With this venue situated near to the open coast the potential is high for a halibut and these were the target for this party of the holiday.

It was decided to fish six rods over the full ebb tide with three rods dedicated to halibut fishing and the others rigged with light terminal tackle to search out a quality dab or plaice.

After 2 hours of slow fishing the flow of the ebb started to peak and all eyes turned to Johns rod, his ratchet screaming as the rod danced in its rest. John played the resultant 18 pound halibut like a pro and the first halibut was soon on the shore.

Stuart was keen on the camera so we managed to catch the landing on film.

Phill hooked into a large fish which was lost after a 50 metre run when the line snapped. However he was soon back into rod bending action and after a five minute battle the halibut was hauled onto the rocky shoreline to the acclaim of the guests.

Phill expresses his thanks to all the British Army lads for a fantastic week and a fishing session that he will never forget.