Shore fishing picked up during last week, with a few more quality whiting and flatties showing. A ruffle on the sea over the weekend then produced some double figure cod, and some anglers enjoyed good mixed bags mainly from the low water marks.

However cod fishing in the main remains very hit or miss. Best cod reported was 15 – 01lb taken by Dean Turnbull from the Blast Beach (see image in gallery at bottom of page). Dean did well to land it after hooking it from the cliff top and then walking down to the beach to land it. Chris Hossack had little and large cod of 13 – 09lb and 3lb during a session on Roker Pier. 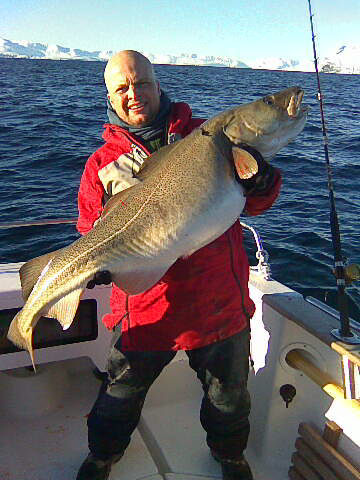 The Ryhope Tuesday Sweepstake saw 16 turn out in gale force winds with only 2 weighing in. Charles Irish had a coalfish of 615 grammes from Hendon, and Bob Surtees had a flounder from Roker for 255 grammes.

Seaham Juniors also fished Saturday afternoon and again only 2 fish were weighed in. Connor Burn had a coalfish of 0.6lb, and Kieran Newton had a flounder of 0.8lb.

Another Eastenders Open on Sunday afternoon saw 4 weighing in 5 flounders. Willie Rowntree had the best with 1 – 06lb; Neil Cutler had one of 1 – 01lb; and Steve Rackstraw had 0 – 13lb.

Hartlepool O.M.A.C. fished Saturday with only 2 weighing in whiting and dabs. Dave Littlewood had 5 fish for 3 – 13lb, and Ian Palmer had 3 for 1 – 06lb. Next match is Saturday March 21st from 6pm till midnight.

Boats: Jeff Ayre fishing in his own boat Swordfish out of Sunderland reports a midweek trip taking several cod over 3lb and a lot of smaller ones returned.

And to finish on a high North East angler Paul Rodgers (left) went north for the winter and took this huge 50lb cod on a trip to Norway.