Shore view: Plenty of water colour and a slight sea running during the latter part of last week brought a few cod from various areas. North of the Tyne in particular was well served, but nothing much over 3lb reported from the Teesbay area and Durham beaches, with most anglers struggling. However, some tides have produced quality spawning whiting, with Steetly pier and Roker pier the more productive marks. Dabs also present in reasonable numbers, with some bigger flounders and odd small bass from the clean ground beaches. Anglers fishing low water marks found better cod sport, but fish generally scarce. Rockling seem to be the main species from the rock marks.

Boats: Commercial boats still report good numbers of cod just a mile off the Durham beaches. These are feeding hard on the bottom, and why they have not moved inshore in any great numbers remains a mystery. A good heavy northerly sea may be needed to move them within range of the shore angler.

Roker pier consistent for numbers of whiting, and there is always the chance of a better sized cod like the 7 – 11lb fish Trevor Green caught last Monday. Ritchie Carr had a 5 – 15lb cod during a midweek session, and an unknown angler took a 9 – 08lb fish from inside the bay. Baits tipped off with mackerel have been taking the whiting, with bigger worm baits better for cod. Dean Turnbull fishing Seaham North Pier had a surprise Pollack of 3 – 14lb.

Scott Miller had an fortunate experience on Roker pier when he lost his new Kompressor rod and 525 reel to a passing ship. Scott’s kit was later recovered by an unknown angler. To return the tackle to Scott call 07836-509253.

North of the Tyne: Amble and Beadnell areas continue to produce a few better cod. One of the biggest cod of the winter so far was landed by Allen Matthews during a pleasure session at Beadnell in a flat calm sea. It weighed a monstrous 18 – 06lb, proving these bigger fish can turn up at any time. 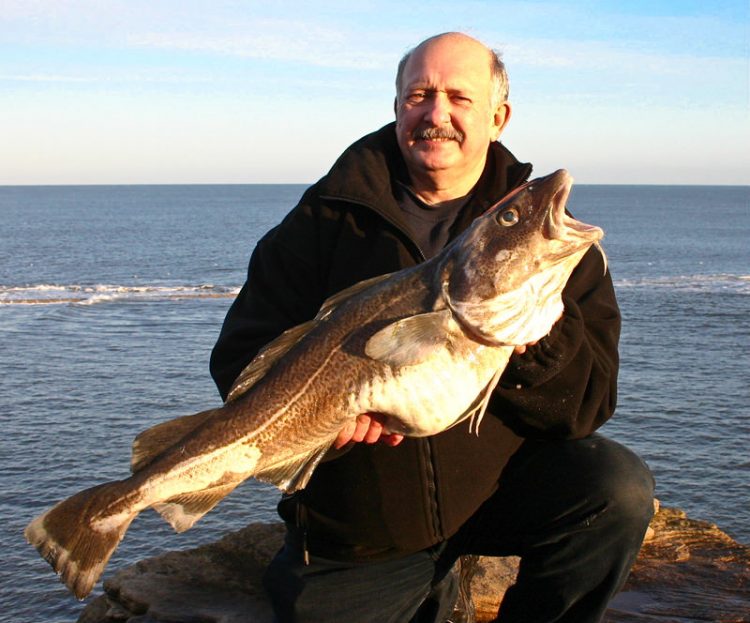 The Ryhope Tuesday Sweepstake saw plenty of whiting from the river Wear marks. Darren Welsh won with a whiting of 520 grammes; Steve Moore had a flounder of 500 grammes, and there was tie for third place with Lee Brown and John Scott both having whiting of 470 grammes.

The last Tynemouth Winter League match on Saturday saw 12 fishing, with only Tony Wheeland weighing in with a cod of 2 – 01lb.

Last Sunday’s Easington Council H.S.F. Open saw a fantastic turn out of 578 anglers fishing in a good South Easterly sea – not always the most productive conditions – but 57 anglers weighed in 74 fish for 151.98lb. The first prize of £2000 for the h.s.f. went to Mick Davison with a cod of 8.40lb; £1000 went to Walter Yardley with a cod of 6.07lb; A.Wilkinson had a cod of 5.90lb; Chris Dawson had a cod of 5.68lb; Peter Middleton had a cod of 4.94lb. Top junior J.Coussons was well up the leaderboard with a cod of 3.34lb. George Heron won the disabled section with 0.53lb, and ladies winner was Shirley Newton.

Coming up: Sunday February 1st is the 14th Dave Jobson Memorial Open organised by Blyth S.A.C. Fishing from 10.30am till 2.30pm, between the Tyne Bergen Quay and Pattersons Garage Beadnell. Basic entry is £10 plus optional pools etc. Juniors under 16 are free if accompanied by a paying adult, and juniors under 14 must be accompanied by an adult. Register at the Ridley Park Hotel Blyth from 8.30am till 9.30am. First prize for the heaviest bag is 50% payout and 100% payout for the h.s.f.