“It’s a dirty job but someone’s got to do it!” gagged Steve Souter as he went Alderney mullet hunting with one hand over his mouth in possibly the smelliest place on Earth.

While Alderney’s imposing ¾ mile long breakwater is the most famous and recognisable mark on the island, Doyle, situated not far to the west, is arguably the most infamous. Doyle is so named because it sits in the shadow of 19th century Fort Doyle, which you have to walk around to access the rocks at the front. If sight of the old fort doesn’t get your attention, the spreading brown stain into which you fish, and the overpowering stench spewing from the town’s main sewer outfall, most certainly will. Not to put too fine a point on it… the place is a turd-bath capable of turning the most ironclad stomach. Sea Angler Editor Mel Russ had warned me to avoid Doyle like the plague, claiming he had never properly recovered from his last noxious encounter with the midden place more than 10 years ago! But as quirky fate would have it, Doyle is exactly where I ended up fishing. 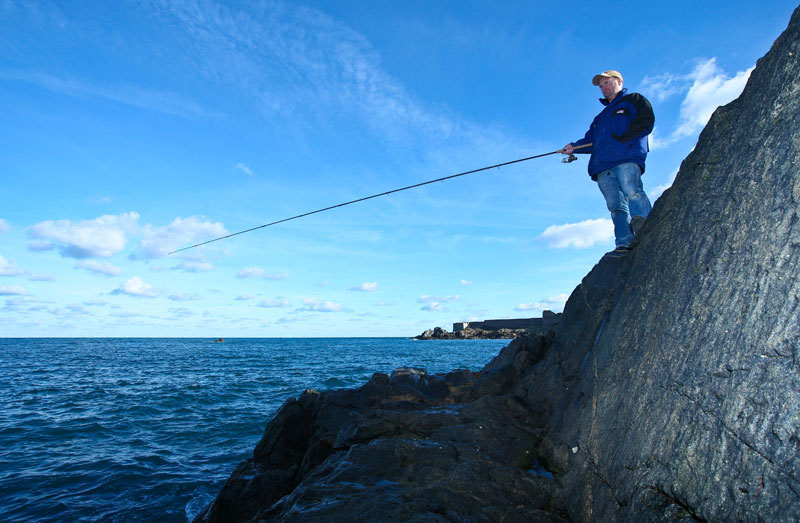 I can think of lots of places I would choose to spend a fishing birthday, but looking straight down the throat of a sewer strangely isn’t one of them. It was Alderney tackle dealer, Mark Harding’s 40th birthday, and happy as you like, off he trotted to one of his favourite rock marks. Alex McDonald and I caught the gagging smell as soon as we opened the car doors, and were not mad keen to follow. With reference to the 70’s TV show ‘The Professionals’, the comic in me asked of no one in particular “Where’s bloody Bodie when you need him?” Shrugging, we gathered the tackle and followed Mark around the fort to the rocks.

Work to improve and divert the Doyle discharge had been going on for some time. Apparently the plan is to drop the level of the spill-pipe so that spoil is pumped underwater, rather than it spurting out onto the surface, as has been the case previously. Cement mixers and heavy earth-moving plant equipment were testament to this ongoing project. Workmen in fluorescent yellow high visibility tabards and hard hats stopped to talk fishing as we passed. We had come here to track down a fish synonymous with stinkpot venues – mullet. And word from the savvy workers was that there had been good numbers of fish to around 5 lb caught here only yesterday. It’s amazing how a snippet of good news can alter an outlook, and we moved on with more of a spring in our step and instantly impervious to the suffocating pong. 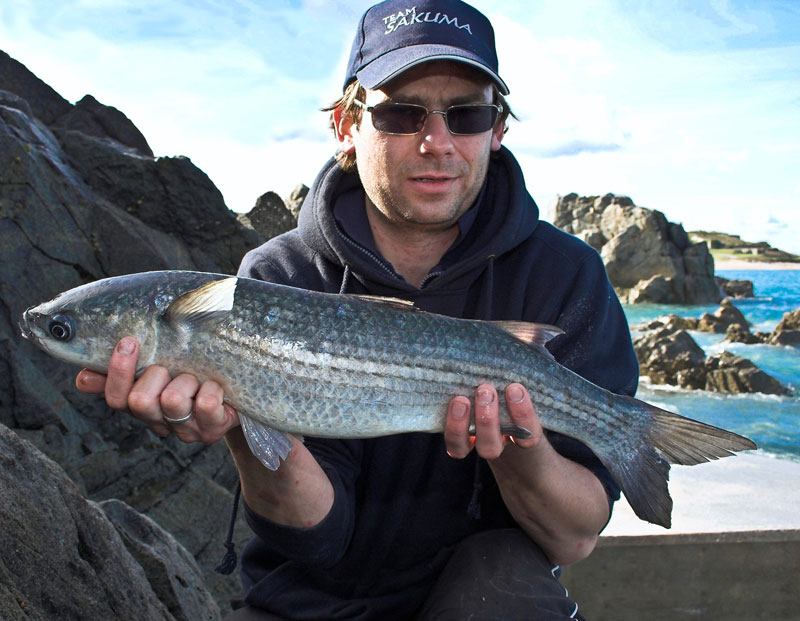 The rocks at Doyle are a piece of cake to negotiate. The sea was calm with just a hint of an onshore wind. Mark and Alex were armed with heavy freshwater float outfits, several loaves of bread for bait, and an essential groundbait bucket. They made their base well back on the highest rocks, and immediately threw in generous amounts of shirvy – that’s groundbait to silly mainlanders like you and I. Mark makes his shirvy to suit target species, but the main ingredients are always pulped stale bread and plenty of coarse breadcrumb. If bream were the main target, then more minced fish and oil are added to the mix. But when the sights are on mullet, the fish mash is omitted and the amount of oil is cut back. 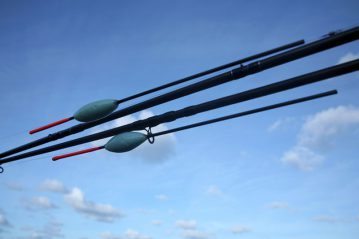 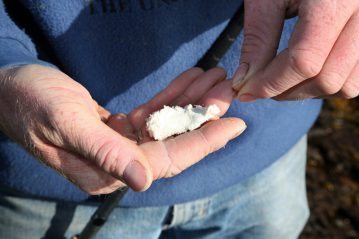 With the tide beginning to flood, stodgy flakes torn from slices of fresh bread were firmly pressed onto size 8 hooks and cast out into the foulness. It’s amazing how the mind is given to wandering when fishing into a crouton slick of bobbing loveliness, and by simple association, mine went for a walk. Billy Connolly used to spin a famous yarn called the ‘Jobbie Weecha’, which to those who don’t know is a comical story about a mythical machine fitted to aeroplane toilet bowls that swiped any solid deposits, so that when you looked down, hey presto… nothing there! It occurred to me that the Doyle’s sewage problems would be no more if only they could get hold of a consignment of those Jobbie Weechas! 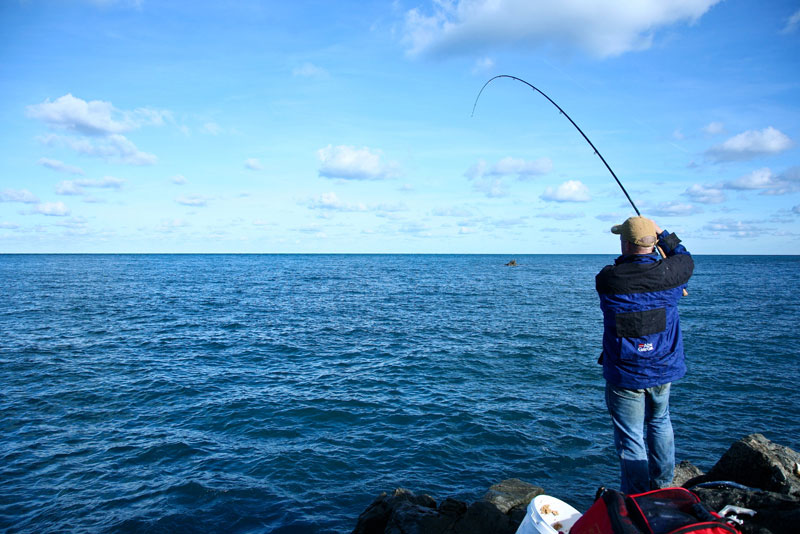 Garfish, loads of small black bream and even ballan wrasse fell to the bread baits before the mullet showed up. Soon enough glinting razor fins fleetingly tickled the surface and plinking ripples drew Alex and Mark’s radar attentions. The ghosting grey shapes were barely discernable in the bright conditions; even through polarised sunglasses, but they didn’t escape eagle eyes. Both anglers were fishing perhaps 12 feet down, and depth adjustments were called for as these fish were clearly working much higher up than first anticipated. 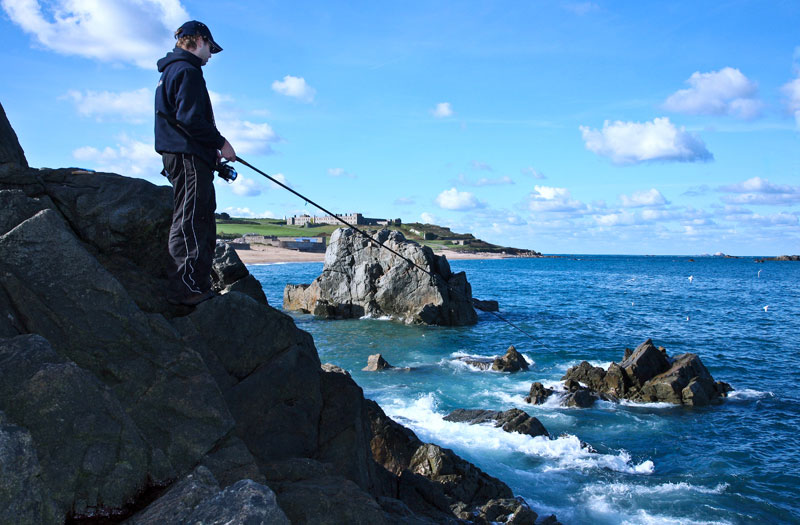 Mark roughly ripped up half-a-dozen slices of bead and tossed them in. 20 yards out a couple of decent mullet could be seen moving between lumps of floating bread; sucking them down before vanishing from sight. Fish hustled baits below jangly floats, but both anglers sat stalk still in cold fixed concentration. Mark is an experienced mullet man who has learned not to slash at a tentatively dibbing float. This time, reacting to his disappearing float, he swept the rod backward and cussed loudly when he failed to connect.

Frustrations were repeated several times by both anglers before Mark connected with the first mullet of the afternoon. At a modest 2 lb, the fish was quickly netted and set free. Alex, fishing to the left and full into the sewage line, was being barraged by bream that snaffled his bread bait within seconds of casting out. Mark on the other hand, was working slightly clearer water, and was into a better mullet. At closer to 4 lb this one put up a much more spirited fight and Alex dropped everything to do a good job with the landing net. 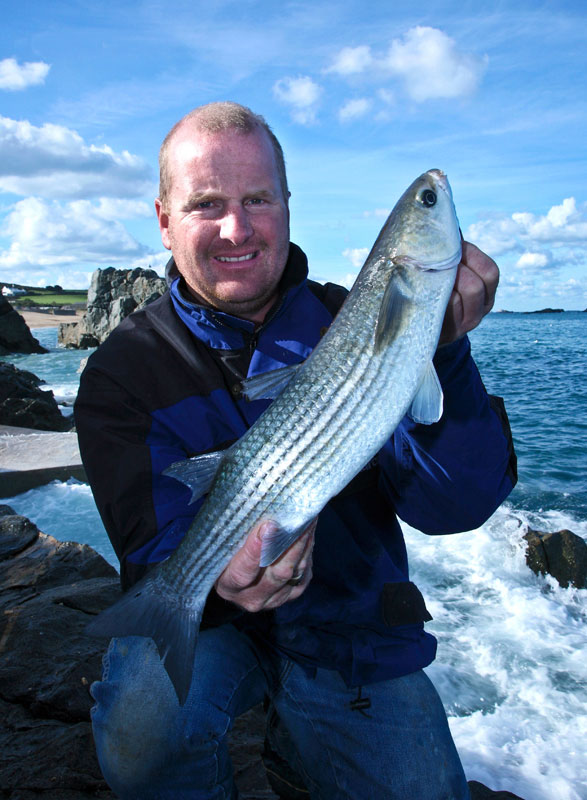 You have to ask if the shirvy is really necessary given the ever-present spill of human grot. Mark’s answer as he tossed more and loose bread into the sea, was that it doesn’t do any harm. Between party-crashing garfish and bream, both Alex and Mark went on to sock it to the Doyle’s bream population with a good number averaging around 3½ lb.

Doyle is also known as ‘the Lights’ among local anglers. The mark fishes all year round and is easy to access. Fishing is comfortable in calm conditions but be wary if there is any swell present. The flood and ebb tides both produce fish. Watch that building swell on the ebb, which starts to run 2 ½ hours after the top of the tide. Float fishing, spinning and bottom fishing are all productive for a wide range of species including garfish, mackerel, mullet, bream, bass, red mullet, sole, plaice, conger, tope and pollack.

Doyle is not renowned for the double figure winter mullet that Alderney is famous for, but throws up regular 6-pounders. Adjacent Crabby Bay can provide a whopper in calm, windless winter conditions. November to March is the best time for big mullet, with smaller fish available throughout the year. There is no escaping that Doyle is a sewer outfall. As such, anglers are advised to be very careful, and to scrub up after fishing there.

Tackle and baits can be bought on the island from Alderney Angling where you will also find the latest catch reports and mark information.