A heavy Easterly sea towards the end of last week saw an improvement in shore sport, but only briefly, with some nice cod moving inshore.  Middleton Pier produced fish to 5lb, Crimdon saw a few size fish showing, the Durham beaches produced mainly smaller fish, but Mick Davison had cod to 6lb from the Chemical Beach.  Rathouse Corner in the Wear saw several cod around the 2lb mark landed, and John Scott fishing the Targets at Ryhope had cod to 3lb. 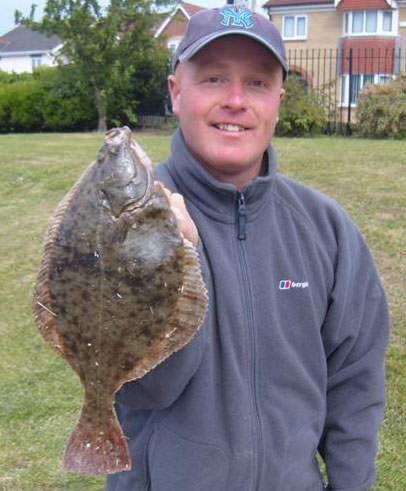 Roker Pier is producing mainly undersize cod, coalfish, and flounders.  South Shields Pier has seen similar results with better numbers of plaice now showing, but the Tyne is still the more consistent mark with good numbers of flounders, whiting, and the odd cod from as far upriver as the Copthorne Hotel and Derwenthaugh Marina.  The lower Tyne has large numbers of smaller cod present with just the very odd bigger one around the 1lb mark amongst them.  Most fish are now taking crab baits with worm only picking up the odd smaller fish and flounders.  Graeme Armstrong had a good session on South Shields Pier taking 7 flounders around the 1lb mark on ragworm and mackerel.

A few more flounders are starting to show from the beaches and rivers North of the Tyne but the rock edges are still quiet.  Junior Callum French won the last Amble summer league match with 3 flounders for 2lb 5oz, and Tony Cook had the heaviest with a flounder of 1lb 11oz from the river Aln.  Barry Tweddle won a Railway A.C. match with 9 flounders for 239cm from the Aln where Darren Taylor had the longest with one of 38cm.

Fishing in the Wear has improved slightly but on most days anglers are still struggling to find any size fish.  The last Eastenders sweepstake saw 15 fishing at the Business Park but only Ernie Hunter weighed in with a flounder of 28cm.  The East End and Hendon sweepstake on Thursday saw only 6 turn out.  Geoff Moon had 2 codling of 28cm and 27cm, and George Brown had a codling of 18cm.

Hartlepool Pirates fished on Friday and most fish came from the river marks.  Bill Bradley had 2 eels and 1 flounder for 1lb 5oz, Darren Dixon had the heaviest fish with a coalfish of 1lb 4oz, and Dave Robinson had 2 eels for 13oz.

Sunderland S.A.A. fished Sunday when 5 out of 11 weighed in single flounders each.  Bill Gamblin had the biggest at 1lb 6oz, Alan Mordey had one of 1lb, and John Robinson and Paul Robinson tied on 13oz.

Seaham S.A.C. also fished Sunday with 6 out of 46 weighing in 8 fish for 5.28lb, all flounders and plaice.  Paul Westmoreland fished the Blast for 1 plaice and 1 flounder for 1.93lb, Andy Byrom also had a flounder and plaice for 1.17lb from Seaham Hall Beach.  Keith Barrass was third with a plaice of 0.61lb from North Pier.

Boats are starting to pick up increasing numbers of cod from close inshore.  Dave Todd fishing from a kayak off Blyth Beach took 12 cod to 5lb.  Keith Brown, Bert, Kyle, and Kenny Gray fishing from their boat The Boys out of the Tyne took 23 cod to 8lb.

A series of 3 matches in the Northumberland Sea League sweepstake starts on Saturday June 27th fishing from 11am till 3pm between Cullernose Point and Marden Rocks.  Entry is £10 with 100% payout.  Register at Boulmer car park from 10am till 10.30am.  The remaining matches are on Saturday July 18th fishing from 4pm till 8pm, and then on Saturday August 8th fishing from 9am till 1pm.  Contact Geoff King on 07946-744770 for details.

Saturday July 18th and Sunday July 19th sees the Tyne and Wear Flounder Festival.  On Saturday fishing is from 10am till 2pm at the Tyne Business Park, and on Sunday fishing is from 11am till 3pm at Southwick promenade in the Wear.  Entry is £10 per day both days must be paid for on the Saturday.  There are optional team events, longest fish and zone prizes.  This is a measure and release match for anything over 25cm, pipefish are not allowed and all eels count as 25cm.  Contact Barry on 07765-663632

On Sunday, June 21 the Friarage small boat fishing competition is being held out of Hartlepool.  Vessels may leave the harbour from 7am. Entry is £20 per person with a full payout.  Prizes are for the heaviest single fish, which must be gutted, and there will also be a raffle. Further details from the Friarage Tackle and Bait Shop, The Headland, Hartlepool, telephone – 01429-273145