The heaviest seas for a long time battered the north east coast last week and most anglers were sensible enough to save their bait for when the sea started to drop off. They were rewarded with some nice big bags of cod being taken from all areas. The sheltered marks at Hartlepool, and in the lower Wear and Tyne saw cod to 6lb landed but the better fishing was north of the Tyne where some lucky anglers reported taking two or more double figure specimens in a session. All baits have taken fish, with some of the bigger specimens falling for large fish baits. There has been a lot of feed washed out in some areas so perhaps these bigger fish are just looking for something a little different as worm baits seem to be attracting the large numbers of whiting which are present all along the shoreline.

Hartlepool Pirates fished last week. Steve Swales had the heaviest fish, a cod of 6lb 5oz from the Wreck Hole while Bill Bradley had the heaviest bag with six fish for a total weight of 10½lb, and Syd Burtcher had a single cod of 2lb 15oz.

Best cod reported last week was a nice specimen of 19lb 1oz taken by Ed Harvey, which won him the Tynemouth Christmas match. Mick Bell only needed six whiting weighing 4lb 15oz for second place, with 41 out of 60 weighing in small mixed bags of whiting, dabs, and cod. Al Thain had one of the better pleasure sessions taking a 36lb bag of cod from a Northumberland rock mark, best fish weighed 13lb, 12lb, and 6lb. Some big cod are also starting to show south of the Tees where Mick Beadle had one of 10½lb from Kettleness and Nick Westgarth one of 10lb 1oz from Hummersea. 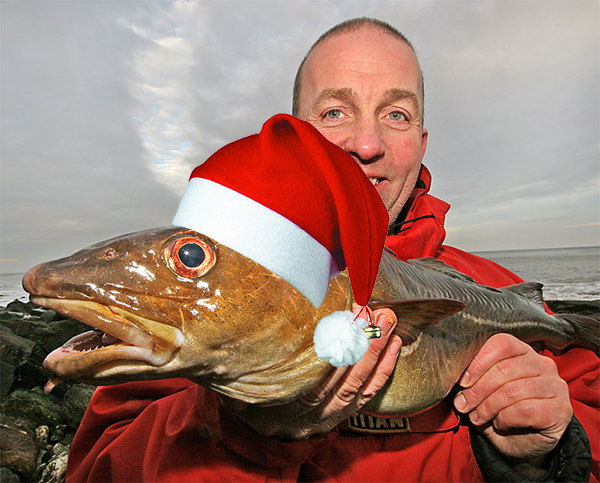 The last Tynemouth Retired Members’ match saw similar but much bigger mixed bags with 24 out of 28 finding fish. The winner, Tony Anderson, had 17 whiting and a cod for a total of 14¼lb. Second place went to Dave Scrimageur whose 16 fish bag weighed in at 11lb 14oz, and Trevor Straker’s cod of 2lb 2oz was the heaviest fish. Their last winter league match fished in very heavy seas saw none of the 11 anglers weigh in with nearly all marks unfishable.

Cleadon A.C. saw all 30 anglers fishing the Tyne or South Shields pier last week with 12 weighing in. Mark Shotton had an eight fish mixed bag weighing 7¾lb from the Tyne to take top spot ahead of Neil Cutler on 5lb 5oz from the pier. Terry Wood had the heaviest fish, a cod of 2lb 2oz. Micky Bell won a Seaton Sluice match in slightly better conditions with five cod for 11lb 14oz, followed by Steve Sherman with a single cod of 6lb 7oz.

The Whitley Bay Evening Open last Saturday saw 25 out of 96 weigh in mainly cod in a heavy sea that was just slightly too rough for some marks. Phil Skinner took the heaviest fish prize with a cod of 9lb 6oz, and the heaviest bag with four for 14lb 3oz, all taken from Bog Hall rocks. Runner-up Peter Wilson had six cod for a total of 12¾lb, Paul Sample had five for 12¾lb, and Gary Wilson had four weighing 12lb 6oz.

Alberta S.A.C. is holding the Reg Francis Memorial Open in the Tyne on Saturday 29th December with fishing from 10am until 4pm between Jarrow Riverside Park at the Police HQ, Church Bank, the Mesh, and Hebburn Marina. Basic entry is £5 plus optional sweeps, register at Jarrow Alberta Social Club from 8am until 9am.

Easington Welfare Club has an open on December 30th when fishing is from 11am until 4pm between Noses Point and the Chair at Blackhall. Basic entry is £12; first prize for the heaviest fish is £500. Register at the club from 9am.

The ever-popular Amble Open is on Sunday January 13th with fishing from 8am until 1pm between Seahouses South pier and Lynemouth pipe. Basic entry is £12, which included the heaviest prize. Register at the Radcliffe Club Amble from 6am. All rivers are excluded but disabled anglers may fish from Amble pier. All flounders must be presented for weighing in buckets of water preferably with aerators attached, no plastic bags. Top prizes for the heaviest bags are £400 plus a rod, £300, and £150. Top prizes for the heaviest fish are £300, £200, and £100, the heaviest flatfish prizes are £150, £100, and £50, and the ladies and junior top three will get £50, £30, and £20. There is the usual quality prize table. Contact Jim French on 01665-711007 for details.