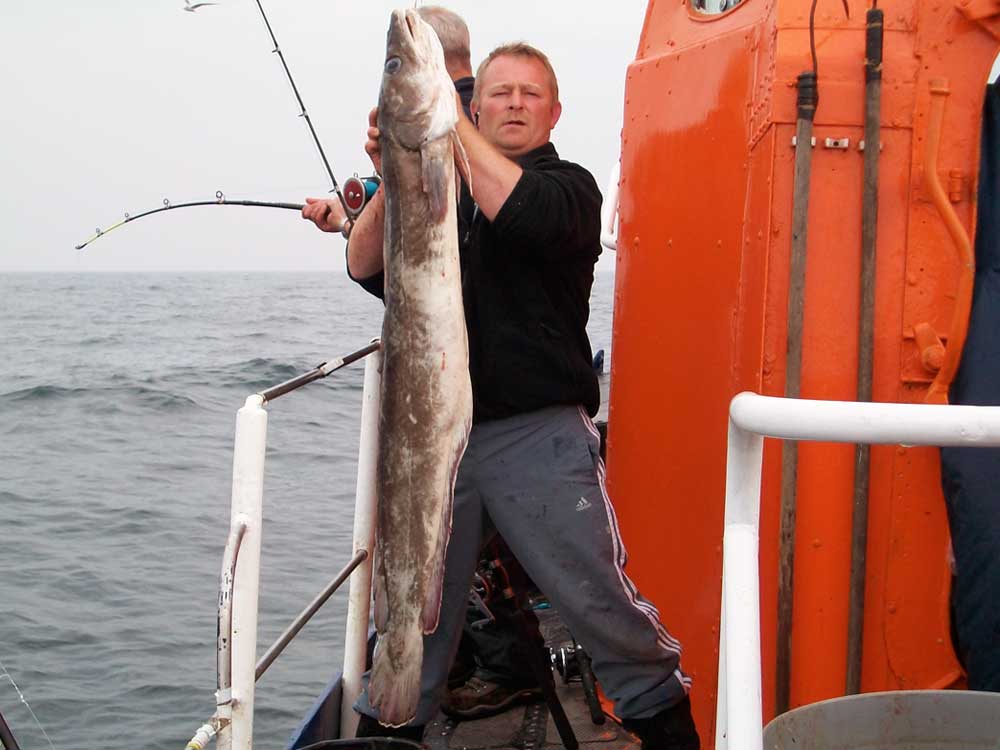 Boat anglers who have been able to find fresh mackerel have been taking some big ling from the wrecks and hard ground marks when the sea has been settled enough. Best fish of the year so far was a monster of 34½lb taken by Jimmy Cassidy on the Sarah JFK out of the Tyne; Mick Ray landed one of 21lb during the same trip. Big cod are also present with Richard Wheatley taking one of 18lb 1oz on the Flamer 2 out of Hartlepool during a trip which produced over 70 cod. The Evelyn Jane out of Hartlepool had a midweek trip taking 200 cod to 14lb from an offshore mark. Another trip out on Saturday with a party of anglers whose previous angling experience was fly fishing only, were all pleased to take cod to 12lb and ling to 10lb on their first ever sea angling trip with a total of 70 size fish landed which also included pollack to 6lb.

There are plenty of mixed bags of whiting, flatties, coalfish, and the odd smaller cod being taken from the Hartlepool piers on late evening and night time tides. Some of the whiting are again approaching the 2lb mark, worm and mackerel baits have been taking most of the fish. Hartlepool Pirates fished a recent evening match with winner Bill Bradley taking 20 fish weighing 9lb 14oz, and Steve Swales having six for 2lb 6oz. Next meeting is on Thursday August 25th in the Stranton Social Club at 7.30pm.

The last Tynemouth retired members match saw 10 out of the 17 fishing find fish in the river. Tony Taylor won with five coalfish, three mackerel, two flounders, two cod, a dab and a plaice for a total weight of 18lb 3oz, including the heaviest fish, a cod of 2lb 14oz. Dave Hayley had six coalfish, one flounder and a dab for 7lb 14oz to take second. South Shields pier has seen similar results with plaice up to 3lb taking ragworm baits. North of the Tyne Simon Robinson took 15 cod and coalfish to 3lb from Lynemouth beach

There are plenty of fish in the Wear on most tides with flounders, coalfish, whiting, eels, codling, and even the odd bass reported. Despite this the Eastenders Wednesday evening sweepstake saw a surprisingly poor result with just four anglers weighing in 15 coalfish, four flounders, three eels, and a single whiting. Jimmy Davison won this longest fish match with a nice whiting of 42cm, followed by Micky Davison with a coalie of 37cm, and there was a tie for third place with Jim Dobie and Tommy Tate each with coalfish of 30cm.

The Eastenders Saturday sweepstake was back on form with all 16 anglers finding fish at the Business Park. Barrie Robson took the heaviest fish prize with a flounder of 1lb 5oz, Jim Dobie had one for 1¼lb, and followed by Brian Turnbull with a coalfish of 1lb 3oz. Jim Dobie had the heaviest bag with 17 fish weighing 12lb 6oz.

Seaham A.C. fished for the Treasurers Cup on Sunday and also had a good weigh in with 21 out of 46 entrants weighing in 39 fish for 34.70lb. George Hope won with two weighing 3.96lb while runner-up Micky Davison had four for 3.72lb. Third placed Pat Carroll had five for 3.52lb, and Jim Dobie finished fourth with four weighing 3.18lb. George Hope had a dogfish of 2.69lb to lift the heaviest fish prize. Most of the fish came from the North Pier.

The Bedlington Summer Open saw slightly better conditions off the Northumberland rock edges where 29 out of 94 anglers weighed in 40 fish for a total of 120lb. Phil Wright won with four fish for 15lb 1oz taken from Craster, Craig Ogilvie was second with two weighing 8lb 3oz, the best of which made 5½lb, and Mick Dunbar had three for 7lb 8oz.

Sunday October 30th sees the Redcar Navy and Gents Club 14th Annual Open fishing from 10am until 2.30pm between South Gare to Whitby East Pier. Basic entry is £8 for seniors and £2.50 for juniors with the usual sweeps and team events. Register at the Priory Club Lord Street Redcar from 8.30am. This is a heaviest single fish event with one fish only per angler to be weighed in. The top three prizes are £500, £200, and £100, plus junior and ladies prizes and a full supporting prize table. Weigh in from 3.15pm at the Priory Club. Contact Tony Barker on 01642-503049 for details.