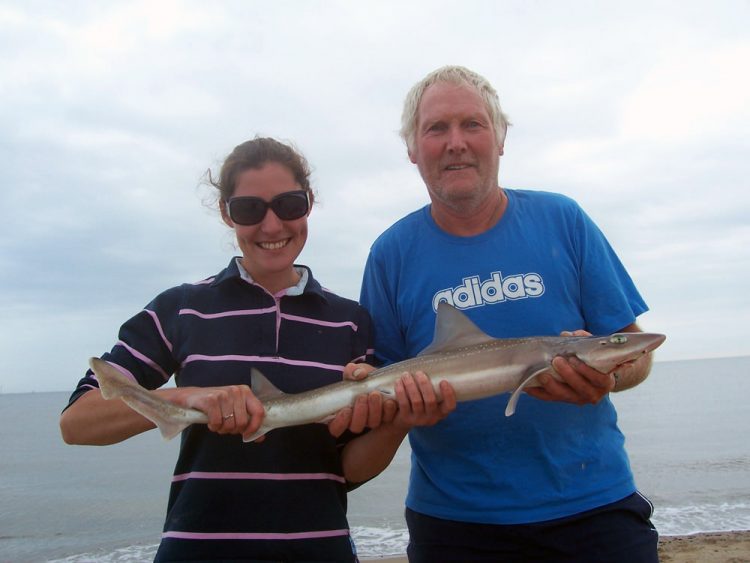 It was déjà vu in the latest Skegness Pier Angling Club (S.P.A.C) match held at Drake Road. Almost a year to the day when anglers last bagged up with smoothounds in a S.P.A.C match at the same venue, the hard-fighting small sharks were there again in vast quantities, resulting in great sport throughout the 4-hour match.

Wrangle’s Alan Steadman made the most of the unexpected bonanza, finishing well ahead of the field with seven smoothounds and a flounder for a total weight of 41lb 6oz. In second place was his son-in-law Paul Cridland, with four smoothies and a flounder weighing 23lb 10oz. Croxton’s Dave Burr came up with a nice mixed bag of four smoothies, three silver eels and a couple of flounders, to take third place with 22lb 4oz. He also won the heaviest flatfish prize with his best flounder, which tipped the scales at 1lb 2oz. Smoothounds & silver eels do not qualify for the heaviest round fish prize, which was shared by Michaela Cridland and Skegness local Barry Roper, both with ½oz (14cm) weevers. Michaela and dad Paul also won the Mixed Pairs trophy with 8pts, whilst Alan Steadman made a good day complete, by easily beating Paul Marshall to progress to the semi-finals of the inaugural S.P.A.C knockout competition.

The next S.P.A.C match will be held on Sunday 4th Sep from 9:00am till 1:00pm at Drake Road, with Club members fishing for the Sheffield Cup. There is also an open section, which non-members are welcome to participate in. Please note that this match has been switched from Chapel Six Marsh, to try and take advantage of the excellent smoothound fishing, before they leave our shores. For further information please contact S.P.A.C Secretary Chas Tibble on 07984 967988 or chastibble@hotmail.com