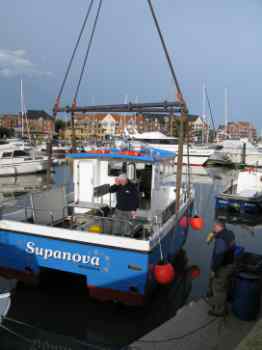 An accomplished sea angler, Lyle trained with Chris Caines on Tiger Lily and at the age of 17 obtained his Yachtmaster ticket. Since then he has skippered for several of the fleet before recently attaining his life’s ambition of owning his own vessel.

The sea worthy catamaran has twin Iveco NEF 250hp turbo charged diesel engines which gives the boat a loaded cruising speed of between 17 and 18 knots.

The layout of the cat means that the fishing space available is actually more than found on the bigger Offshore 105 mono-hull. A fully insulated fish hold will ensure that those fishing extended trips to the Channel Islands will return with catches in pristine condition. Lyle intends to make it financially viable for smaller groups of anglers to put to sea.

Initial trips commencing in March 2010 will be aimed at wrecking for the early season pollack. The skipper promises an endless supply of tea and coffee throughout your day! 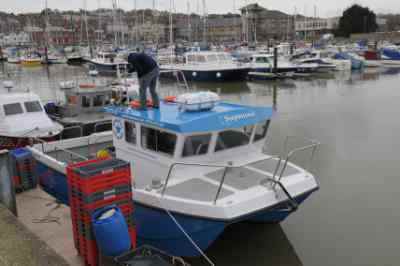