True to its nature, March has come in like a lion with lots of wind, storm fronts and varying temperatures. The water levels of the lagoon system have been fluctuating 6-12 inches which is significant when talking about flats that only have 2 feet of water or less at high levels. Despite the crazy weather, the fishing has remained strong. Redfish and drum can still be found in huge schools and big trout are around shallow flats and sandbars holding smaller mullet. Water temperatures have been ranging from 55-70 degrees and the fish have been happy and feeding.

For anglers using spinning tackle, the 1/8 or 1/4 ounce jig with a paddle tail like the DOA CAL work well even under the windiest conditions. When winds are light, a 1/4 ounce DOA shrimp is my go to lure for redfish. The big trout have been eating both the 5.5″ CAL with a Woodies Rattle or the new DOA Airhead.

Fly anglers targeting redfish and black drum will do well using a small weighted fly that gets down quickly in front of tailing fish. A 7wt rod with a #4 redfish worm fly is a good place to start. For fly and spin anglers alike stealth, speed, and, accuracy, in that order, are the most important factors. What you use to catch them is much less important than getting whatever you have in front of the fish as soon as you can reach them. Fish that are fleeing from the boat are much less likely to eat. Nothing will catch you more fish when sight fishing the flats than learning to cast accurately. 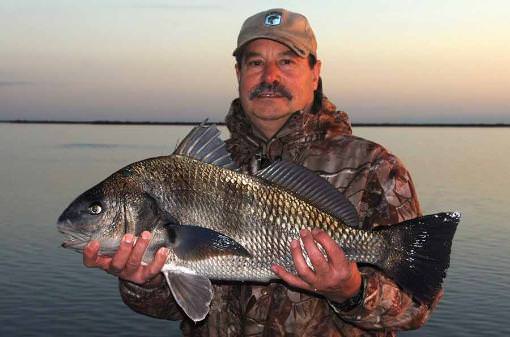 On nearly every trip during the past month, we have encountered a minimum of 1,000 redfish, sometimes many more. The catching has varied and is directly tied to the anglers’ casting skill. Even when fishing large schools, it is much easier than it sounds and requires some casting accuracy. Below is a sample of some of the recently caught fish.

Last week, after one of the coldest fronts of the year and on a less than perfect weather day, I had the pleasure of hosting Captains Greag DeVault and Clay Eavenson of the B3 Fishing website. They filmed our day on Mosquito lagoon and it will air on their website soon. They showed that even under tough conditions you can catch plenty of redfish.

I anticipate the big schools to remain on the flats for the next couple months. As the weeks go by, these schools become more and more educated and aware of noises from approaching boats. Motors will scare these fish from long distances as will things as simple and squeaking shoes on the deck. Approach quietly and you will encounter a lot more fish. Unless the water dips into the 40’s, which is unlikely this late in the year, the fish should remain on the shallow flats all day long.

Baitbox Big Cod Open is on