Capt. Chris Myers specialises in light tackle sight fishing in the lagoons and flats around Orlando. This is the first of his regular fishing reports fro sunny Florida.

The final weeks of 2012 provided both excellent and tough days of fishing on Mosquito Lagoon. Some days the weather was perfect for sight fishing but, on others, we had high winds, clouds, and cold spells that dropped water temperatures by 15 degrees or more. On the good days, there were schools of tailing redfish in every direction whereas at other times we did not see a tail the entire day even though the fish were still around.

Since the water has cooled down, most of the redfish are in schools and are extremely sensitive to noise. If you do not use a stealthy approach, the entire school will lift up and swim off long before you are in casting range. Some schools of black drum have been showing and they can display the same behaviour. Big seatrout have been hanging around the shallow sand holes and grass edges. There are nearly impossible to spot soon enough when the sun is low or skies are cloudy. If sight fishing is not an option, long casts with a DOA CAL and a Woodies Rattle across likely areas rarely goes unrewarded.

In addition to having cooled down, the water level has dropped 8-12 inches. Many formerly water filled flats are now inaccessible having been flooded for the past 6 months. If you have not been out recently, use extra caution when navigating in low light. I have heard of numerous vessels running aground the past week. 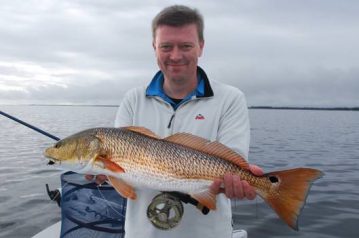 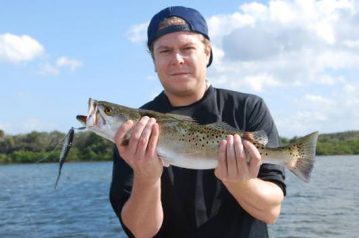 Henrick, a fly angler from Denmark, fished on a cloudy calm day when the redfish were happy and tailing. He was an excellent caster and had no problem feeding a black redfish worm fly to numerous reds.

Matt used a DOA shrimp and CAL baits to catch redfish, pompano, and trout on a half-day trip.

Newlyweds Jeff and Ashley both landed their first redfish and nearly 20 trout on a pleasant winter day in Mosquito Lagoon. 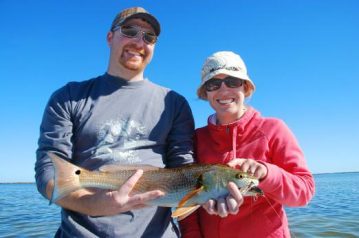 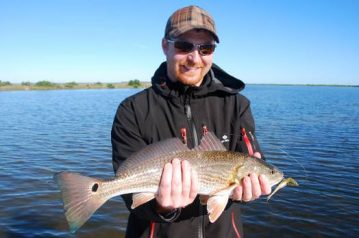 Ryan and Sarah live in North Carolina, but have decided to learn how to fish in Mosquito Lagoon as they frequently visit this area. We started the morning targeting some shallow water tailing redfish.

As the fish stopped tailing, it became increasingly difficult to see them with the cloudy skies. The wind picked up and we took shelter behind the islands where they enjoyed some steady trout catching on the DOA Deadly Combo. 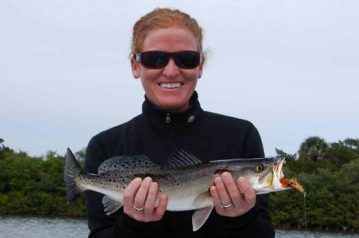 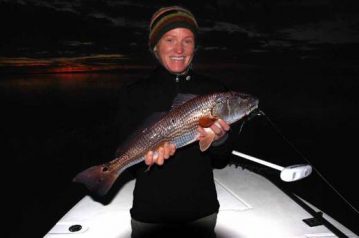 My final trip of the year was one of the coldest starts, the longest day, and one of the most disheartening trips of the year. I was with Seth, a fly-fishing guide from Wyoming and the morning began at a crisp 35O degrees, not exactly the weather people come to Florida for. The winds were light, however, and hopes were high but the huge schools of tailing redfish that had been so prevalent all month were nowhere to be found. The fish we did encounter were not moving until we ran into them. Just as the sun got high enough, so that we did not need tailing fish to spot targets, clouds closed overhead. We ran into big schools of drum that we could not spot soon enough to target before they were spooked. Most areas held at least some fish and we encountered lots of giant seatrout throughout the day, usually as they were fleeing from the boat. We gave up after 10 hours of trying. I hope he will have the chance to return one day with more favourable conditions. 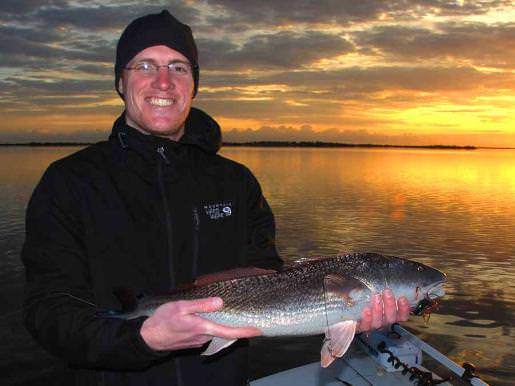 With low and crystal clear water sight fishing will be your best bet on sunny days. The fish can be spotted from long distances on the shallow flats. If your fishing day falls around one of the winter cold fronts that bring clouds and wind, blind casting in deeper troughs and sand holes with a lead headed jig can be productive. During times of cold water, the fish will congregate in these deeper areas. You may have to do a bit of searching to find them but once you do, it can be a bite every cast.

The Power of Isome