The wind turned to a northerly direction for the Bank Holiday weekend and temperatures dropped dramatically, that didn’t deter the fish from feeding, with thornback ray and big bass still being caught.

The problem we have had again this week all along our coastline is mayweed and it has caused quite a stir in the media. Orange slicks were spotted along shoreline from Mersea to Clacton. Mayweed can manifest itself in many ways from oily looking globules to thicker slicks and it is all caused by algae bloom a natural occurrence at this time of year when bright conditions cause the blooms to multiply. This spring we have had a long calm spell which caused the mayweed to gather in slicks, but windier conditions will see the algae bloom disperse and in a couple of weeks it will have disappeared until next Spring.

The boats have had another good week with bass showing quite well. The Mersea charter boat Enterprise skippered by Chris Mole has had a bumper week with the bass plus still plenty of thornback rays as well.

Gunfleet Boat Club members Alan Tipple and Sandie Davis fished only a ¼ mile off of the coast and they caught 11 smoothhounds to 11½lbs. 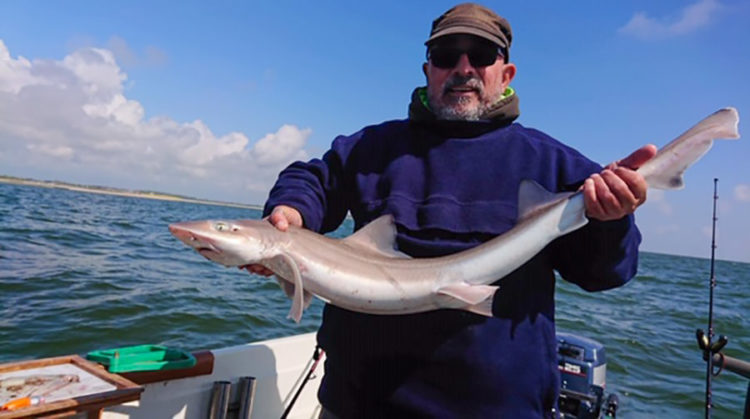 Alan with a smoothhound

St Oysth beach continues to see rays to around the 10lb mark being caught along with school bass.

Clacton Pier has seen plenty of thornbacks caught, its always worth dropping a ragworm bait down amongst the pier piles this time of year, there are some big bass feeding there.

The Holland beaches are reporting good catches of rays after dark along with a few eels now being caught.

Clacton Sea Anglers’ Evening League fished the local beaches for their evening match. Seven anglers fished in calm conditions with gin clear water which made for a slow start to the match, although as darkness fell the fish did begin to feed.

Colchester Sea Angling Club fished the Frinton beaches for Round Two of their Colchester Bait & Tackle League. They fished an evening flood tide with a light westerly wind which made for a comfortable match.

Incredibly every angler caught at least one thornback ray, which goes to show how many rays are in our estuary. The clear winner was Neil Cocks with a winning weight of 29lb 4oz which included seven thornback ray, whiting and dogfish. Second place went to Stephen Yallop with six rays for 21lb 4oz and third Lawrence Chisnall 12lb 13oz.

The Walton beaches have seen some big bass again this week with fish reported to nearly 9lbs being landed.

Walton Pier has seen rays once again this week and the first of the garfish and wrasse have also appeared.