A day afloat on the charter boat Oberon skippered by John Keggie proved to be memorable for one angler, even by the recent lofty Shetland standards.

The Scottish record for turbot had stood for nearly thirty years until a fish of 26lb 1oz was landed earlier this year by Eddie Christie, although the claim is still winding its way through the lengthy ratification procedure. On the 23rd of September this fish was pushed into the realms of an interim record by a magnificent fish of 13.5Kgs, 29.762lbs, landed by local Shetland angler Robert McMillan.

Robert was nearing the end of his fishing session over a bank formed from broken shells in the waters to the north of the Shetland island of Unst when a gentle puck on his rod tip was the first indication of interest from what was to prove to be a massive flatfish. The table top turbot fought hard for 20 minutes, regularly stripping line from Robert’s reel as it dived towards its seabed home, but was skilfully brought to the side of the boat for netting. 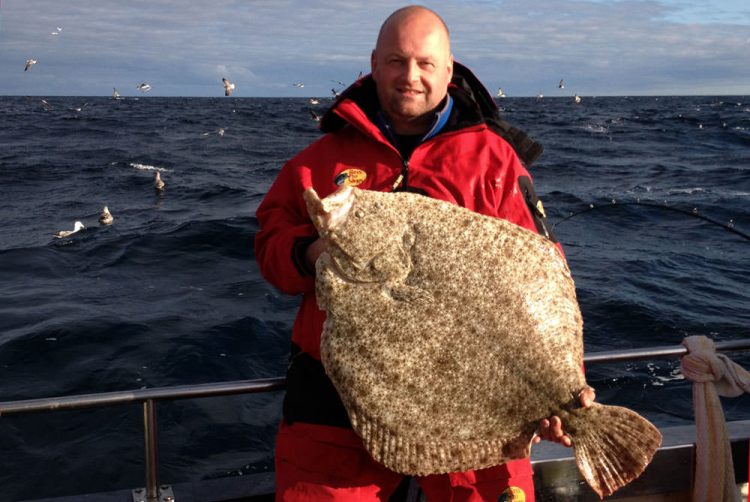 The turbot was weighed on certified scales by a local fisheries officer some 18 hours after capture so would have been over the magic 30lb when first landed. The British record of 33lb 12oz which has stood since 1980 is certainly under threat from the northern waters if the stock levels can be managed.

Robert used a now standard Shetland rig of a flowing trace with a five inch spoon and muppet combo armed with a 6/0 Gamakatsu circle hook and baited with mackerel strip. His trusted Team Diawa TDX 30/50 rod and Shimano Torium 30 reel had been similarly tested earlier in the day with ling to 32¼lb over one of the prolific Muckle Flugga wrecks.