Terry Pederson fished the Gynn Wall close to Red Bank Road last Wednesday night. It was a beautiful, calm night with a flat sea and a balmy breeze from the east. He started fishing using fresh black and some crab he gathered for bait. He landed five smoothhounds varying in size from around seven pounds into the mid to high teens. He brought them all to the steps before letting them slip away. To compliment the smoothies on the evening he picked up a small whiting and a very small Dover sole. A real red letter day for Terry.

Blackpool Boat Angling Club member Ricky Halley reports that he enjoyed a day out landing seven species. The fishing was fairly slow but he had six keeper plaice, a few mackerel with dabs and dogs also featuring. He also had a couple of tope and some hounds.

Fellow Club members Jonny Roddam and Micky Butterworth launched last Thursday at about 2pm and headed straight to a mark he had fished earlier in the week off Norbreck. Micky was into the tope straight away and had four to low double figures as well as plenty of dogfish and a huss. Jonny had three codling, around the 40cm mark, loads of dogfish and a small tope right at the end. They also had a 30lb+ tope on Monday from Norbreck and more than 20 plaice from Cleveleys. 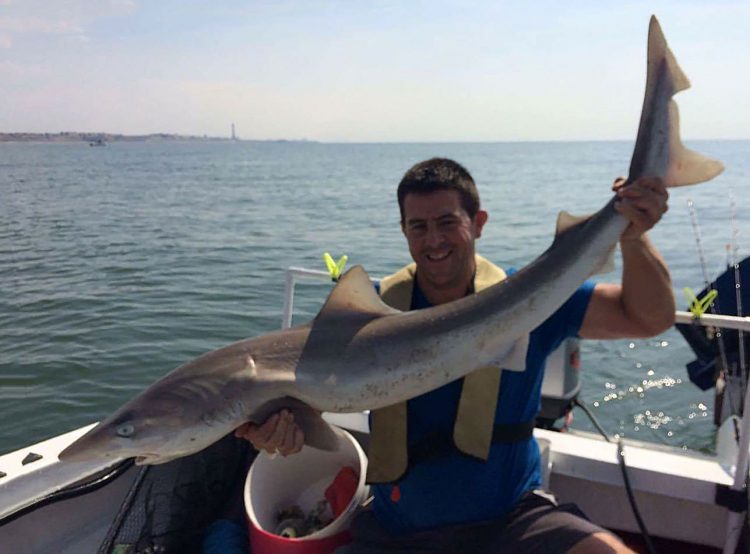 Fylde Boat Angling Club member Bryn Bimpson launched last week and reports that the best fishing was up to 1pm, it died off after that. There were plenty of doggies, small cod, whiting, pouting, weavers and a few mackerel, a good day over all.

Lancashire Sea Fishing member John Pearson was triple dipping in Grannies Bay last week when he fished the last three tides in the bay. On Thursday night the tide was 8.7m, which is about minimum for this mark, and allowed one hour fishing up to high water and the same down. Fishing was slow with a stiff easterly, a westerly provides the best results, nothing till around high water and then had three fish in consecutive casts; flounder, flounder and 25cm schoolie bass, all returned.

On Friday’s day time tide it was the same height as previous night, same easterly wind and produced no bites and no fish.

He finished on the Friday night tide which was slightly higher at 9.0m, giving a longer 1hr 40min fishing period up and hour back. There was the same stiff easterly, and a similar result to the previous night, nothing till high then two fish in quick succession, a lovely 39cm dover sole and a chunky flounder. This takes his 2016 dover tally to 20. A good result for the three tides after recent blanking sessions on the grim wall.

Dave Brown fished Clevelys at low water last Friday night on the flood with peeler crab as bait and as far out as he could cast. He had five smoothhounds to 9lb. He warns to watch out for the rapidly filling gulleys where the water can flood in behind you leaving you stranded on a dangerous sandbank if fishing this mark from low water.