As we approach September it is traditionally an early autumn month of transition for the sea angler. With only a few more weeks of summer species for bass and smooth-hounds, if the weather remains settled we will see thornback rays right through to the end of the year and beyond.

It has been a slow week for the beach angler and with an on-shore wind we have seen a return of weed on some of the beaches making it difficult for some anglers. 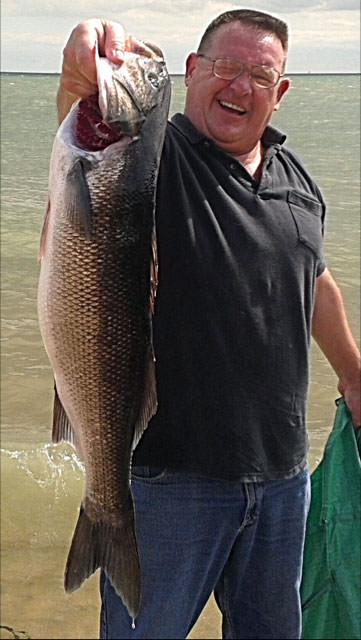 Best catch has to go to local angler Grant Scott with a massive bass weighing in at 15lbs, caught off the Clacton beaches; this could possibly be the largest bass ever caught off of our shore line.

St Osyth beach has seen plenty of small bass being caught plus a few eels, but nothing particularly big. The same goes for Clacton Pier, although with strong winds stirring up the sea it was still small bass and whiting, with the night tides seeing a few dogfish being caught.

The Holland beaches have seen a few soles on the evening tides and school bass, but once again we are in the period when late summer has arrived and we are looking forward to better things. The Frinton beaches have had problems with some weed this week, causing problems for anglers as the weed lays heavily on the lines, but soles and bass are here to be caught, however, very few anglers are fishing this venue.

Walton Pier is still seeing bass, soles and eels. Once again most fish are being caught only a matter of a few yards away from the pier structure. Good news this week, as most regular anglers will know is that the pier has been closed for all night fishing for a good few years. It is now under new management, and I can tell you that from September 15th 24-hour fishing passes will be issued. Contact 01255 672288 for details.

The boats this week have had a reasonable week although the weather has played a part with strong winds causing problems.

Local kayak angler Alan Tipple fished ½ mile off of Clacton sea front and reported that the early run of autumn thornback rays had started. He landed nine rays to just under 10lbs plus some bass and eels, all fish were landed on ragworm bait.

Colchester Sea Angling Club fished their monthly match on the Felixstowe beaches at Landguard Point, they were greeted with strong winds and rough seas. Fish were hard to find and in fact only 13 fish were caught, which included bass, soles and eels.

The high tides for the weekend are Saturday 1.52pm and Sunday 2.22pm