This week we have seen a spell of high winds which has curtailed a lot of the boat fishing, but the boats that have had a mid-week trip reported that there are a few of those early autumn codling trickling through. If the last couple of years are anything to go by they will not hang around too long, with higher water temperatures that we have been seeing in recent years it could be a short season. Let’s see how the autumn progresses.

Once again there have been thornback rays and smooth-hounds being caught. It hasn’t been a record breaking summer for either species although plenty have been caught and as we are now going into September there is a good chance of some of those bigger bass to be caught. They will be hunting the vast shoals of whiting that will be hitting our part of the coast very soon.

Walton Pier is once again fishing well, and my trip this week was to the local pier and I caught wrasse, bass and pouting from on and around the pier piles. There were reports of the odd thornback ray from the top of the pier. 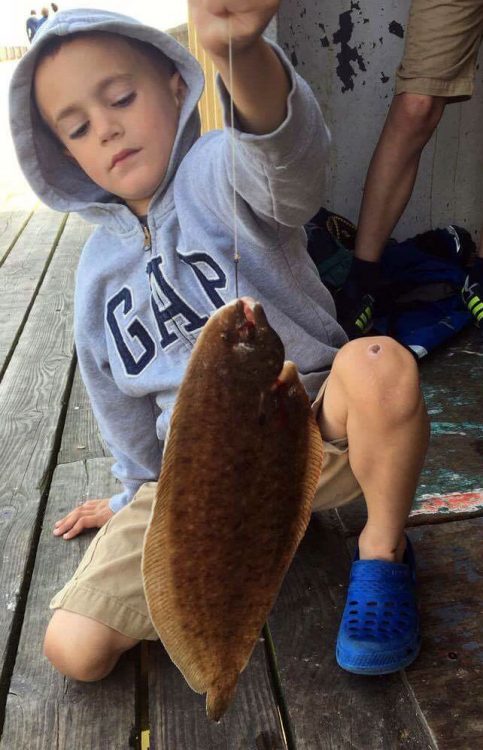 Local angler Danny Allen took his 6-year-old son Harry to the pier, they fished the lower part and Harry showed his dad how to fish landing a 30cm sole on a ragworm bait.

Colchester Sea Angling Club travelled up to Suffolk to fish the Aldeburgh beaches for their annual Sole Challenge Match, but with winds gusting to 40 mph it was always going to be difficult to find fish and so it proved. Eight hardy anglers made the trip to fish this challenge match and fish were few and far between, with three members catching nothing. However, there were sole caught and the overall winner was Mick Bradley with a sole of 12oz, second and third places were tied between Dave Clarke and Martin Close with soles weighing 8oz. There were also a few other fish caught including, bass, whiting, dogfish and eels.

The Jaywick beaches are seeing some larger bass being caught on lures from around the rocky breakwaters and unconfirmed reports of fish to 10lbs have been caught. Clacton Pier is seeing some school bass and a few dogfish after dark; hopefully those autumn thornback rays will turn up here very soon.

The Holland beaches have been slow this week, and with only a few anglers fishing it is quite difficult to get a full report. There are still plenty of small bass to be caught and as the nights are now drawing in those nocturnal feeding soles are being caught from the bottom of the pier. The beaches around this area are once again seeing small bass, soles, eels and the odd flounder.

Walton Sea Angling Club headed for the local Coast Guard beaches to fish their evening match, once again high winds blowing in off the sea made the fishing very uncomfortable, plus lots of weed made it difficult reeling in.

Eels and bass were the only species caught and once again in-form Rob Tuck was the winner with a weight of 2lb 4oz followed closely in second place by Richard Burt 2lb 2oz and in third Dave Collett with 1lb 2oz. Heaviest fish was a 13oz eel for Rob Tuck.

The high tides for the weekend are Saturday 7.27am and Sunday 8.50am