Dale Edwards collected 40 worm from Bispham Angling on Sunday and fished around the corner with big Pete near the Coastguard Station where a brisk easterly wind produced a flat, coloured sea. They were able to bang the baits out and found plenty of small codling and decent whiting. After Pete lost a decent codling he made up for it half hour after high water with a nice fish which weighed 6lb 5oz.

Ian Mawdesley fished high water last Monday night out on the Point. The wind was south easterly with a flat sea but plenty of colour. Ian caught small codling and decent sized whiting from the off and picked away steadily throughout the tide. An hour before high water the rod thumped down and resulted in a six-pound cod. All fish were caught on black lug fished on a pennel rig at distance.

Rick Charleston fished last Saturday on his boat and caught a cracking cod weighing in at 9lb 2oz. It picked up frozen worm just off Rossall and was caught mid flood of the tide. Rick used a simple running ledger rig. 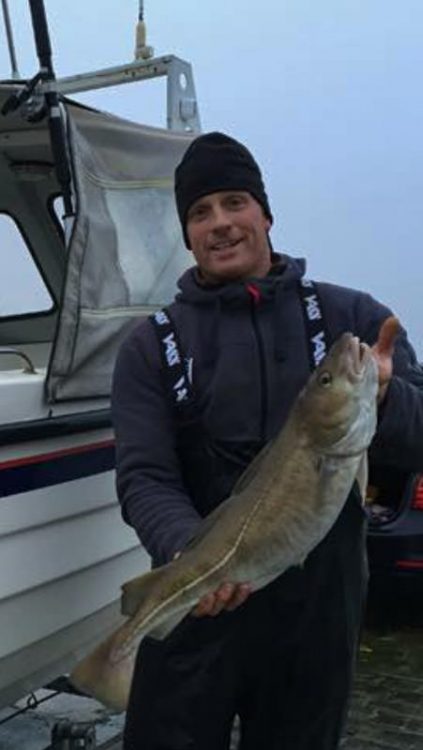 Bobby Watkinson fished the Gyn Wall on the 19th and landed ten small codling and some decent whiting. All fish were caught on frozen black worm fished on a two hook flapper rig with 1/0 hooks.

Bispham Angling and Lancashire Sea Fishing Facebook group fished their match on the Gyn Wall last Sunday, and had an excellent turn out with 74 anglers fishing the event.