Soaring temperatures this week have hit 30oC and with only a slight breeze it has felt very tropical on our part of the coast. Beach anglers have seen a slowdown on the thornback ray front during these bright, daylight hours but the bass don’t seem to mind. The Jaywick beaches, around the rocky breakwaters, have seen plenty of bass caught on light tackle and small ragworm baits.

The beaches around St Osyth have also quietened down this week and once again evening tides will see some bass to 3lbs although there is always a chance of bigger fish and the odd thornback ray.

It looks like the stingray season has been short-lived with no more rays reported although throughout the Summer there is always a chance of the odd heavyweight ray turning up.

Clacton Pier has been steady this week and a few rays have been caught, together with whiting, bass and dogfish. Local angler Peter Rose fished here and caught two thornback ray to 8lbs.

The Holland beaches have been fairly quiet with strong sunlight and clear water keeping most fish in deeper water until after dark.

Frinton has seen soles, bass and the odd thornback ray, most of the soles are being caught around dusk and into darkness and a 50-yard cast with ragworm bait is enough distance to be within a chance of finding some feeding soles. 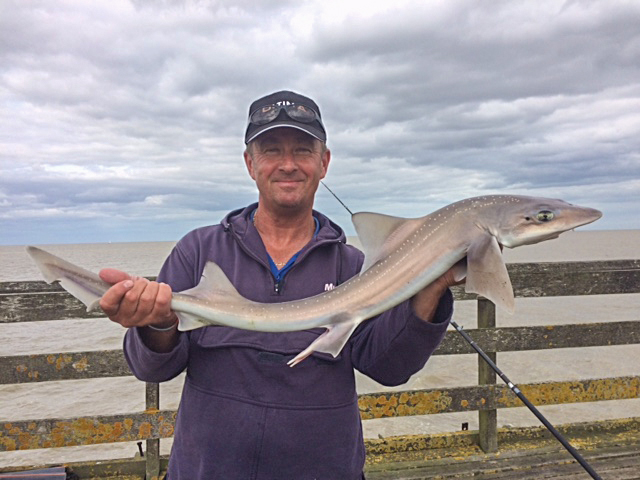 Mark with his Walton Pier hound

Walton Pier is the venue to head for with smooth-hound’s, bass and plenty of thornback rays to be caught. My trip this week was to the local pier, I fished an ebb tide at the top. I wasn’t disappointed and in a matter of just a couple of hours eight thornback rays were caught. Local angler Mark Oxley landed the best fish of the day, a nicely marked starry smoothhound which picked up his fish bait.

Anglers fishing the stem of the pier have reported school bass, dogfish, garfish and wrasse.

The River Stour at Wrabness has seen some good catches of bass for both beach and boat angler, and with very clear water the evening tide here is also the best time to find a fish or two.

The local boats this week have also taken advantage of the settled weather and have seen some big tope on the outer marks although there are plenty of small tope for the inshore boats. Once again smoothhounds to 16lbs are around and thornback ray, although the average size of the rays is smaller than previous weeks.