The fishing was OK, if a bit peggy. The match was for the best pair of flounders so anglers could fish large baits and go for quality. Top angler on the day was Bob Egan whose two flounders measured up to 42 points. Second spot went to Yilmaz with 33 points and third placed Alf Ingham had 28 points for is two flatties. Ashley Sampson finished fourth with two flounders for 26 points followed by Ken Forrest with 24 points.

There were some good bags of fish overall, Bob had 17 fish for 165 points, Ashley 16 fish for 141 points and Yilmaz had 14 fish for 127 points. Eels and small bass added to the flounder landed. Crab was the top bait as you would expect.

Next Sunday it is the Club’s Open Sweepstake on the Gynn Wall with fishing from 10.30am to 2.00pm. Entry fee is £15 all in and all are welcome. 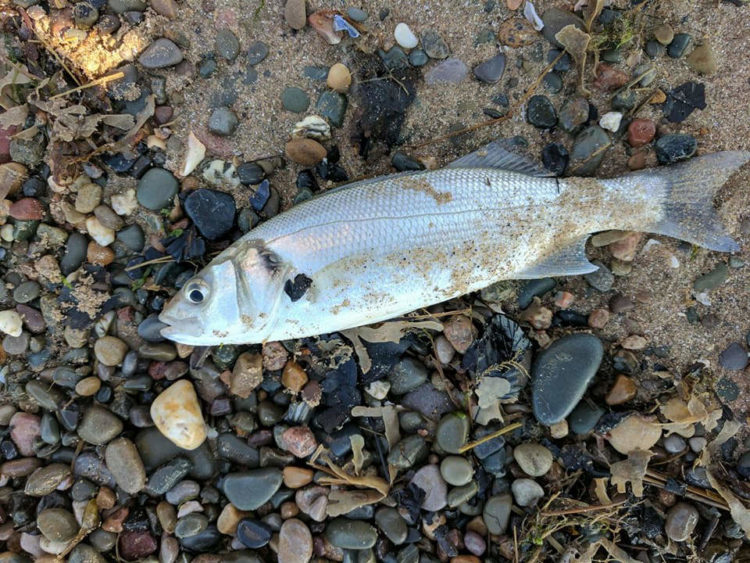 One of Anthony Ellison’s bass

Leyland and District Sea Angling Club match at Walney Island beach produced poor catches with only three weighing in. First place went to Michael Melling with three flounder for 54cm while runner up Nigel Thomson had a 34cm bass and third placed Fred Howard a 32cm bass. Had Nigel won he would have lifted the Golden Peg £500.

Last Saturday Anthony Ellison fancied a change from the Gynn and fished Dronney Road in Fleetwood. He had absolutely nothing until after high tide then it was bass and flounder non-stop. Anthony had his first ever bass from Fleetwood and finished with seven fish in the last hour. All caught either on lug or rag from Jordan Russell. 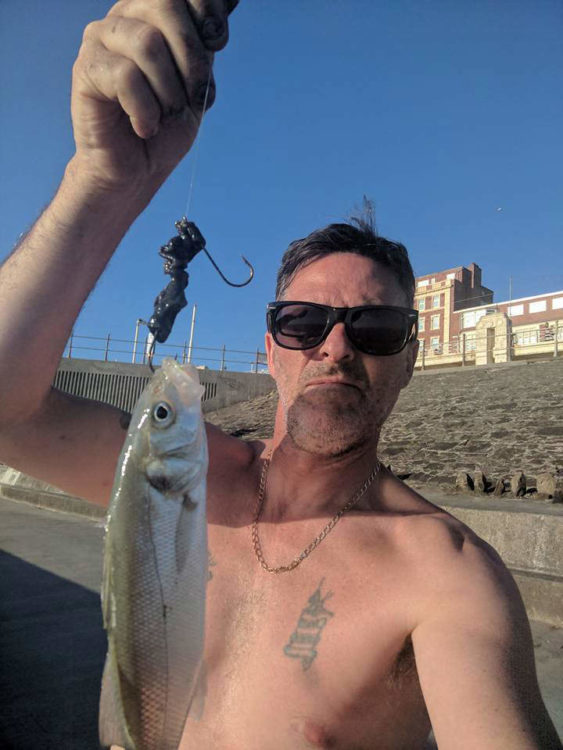 Paul Leyden with a bass

Paul Leyden fished the Gynn last Saturday and enjoyed his day on the bass despite the fact that a stuck roller shutter is keeping his boat in the garage.

Darren Peel had a very good session out on his boat where he landed loads of big bull huss into double figures, smoothhounds and also smaller species. Most fish fell to frozen mackerel and fresh black worm from Bispham Angling.

Joe Green and Kevin Fletcher from Wyre Boat Angling Club enjoyed a great day out in the boat. Starting off with a persona best tope of 30lb they landed 11 species including whiting, small bass, ray, huss, gurnard, mackerel, dabs and plaice.

Blackpool Boat Angling Club member Alan J Taylor fished on Monday 19th with his son, Andy, an hour into the morning’s ebb. With a flat calm sea, frozen mackerel on board and just four hours for the trip they didn’t stop to feather for bait. As soon as the boat settled at anchor a pair of tope baits went out.

Early into the ebb and on a small tide their expectations were not high, but the weather was more than making up for it. We called a halt at mid-day when the tally stood at four decent tope up to around 40lb, five thornback ray and a couple of dogs. The bouncing slave feathers also picked up mackerel, whiting, gurnard and a dab.

Fylde Boat Angling Club member Ben Mathews headed out last Sunday to fish over the other side of Lune Deeps with it being so calm. He landed one nice tope of 31 pounds and missed quite a few runs. He also had mackerel, whiting, codling, pouting, scad, and red and grey gurnard.

Special offer 15% off all Gardner products when you spend £20 or more.