Plenty of small bass for the shore angler and some bigger fish for the anglers that fish the evening tides when the beaches are that much quieter.

Most of those fickle thornback rays have moved out into deeper water leaving just one or two for the pier and shore angler. This happens every summer and within a few days they move back in range and then they are off out again!

Reports from Walton Pier are in a similar vein this week, the odd thornback ray from the top of the pier and small bass, although one 3lb fish was reported.

It is a different matter for those anglers fishing with lures from the side of the pier, they are getting great sport from the small bass that are hunting around the pier piles. The ebb tides are the best to fish and with light tackle they can be great sport. From July 1st you will be able to retain one sizeable bass to take home.

The summer sole are also starting to show from the pier. Sudbury angler David Backler fished a night time tide and landed two on ragworm baits. Other anglers have also reported soles from around the club-hut area.

My trip this week was to fish into darkness around the Burnt House area of Walton. I fished a flood tide with some buddies and fishing with light tackle we had plenty of bites from small bass, flounder and eels. Once again ragworm was the bait that picked up the most fish. 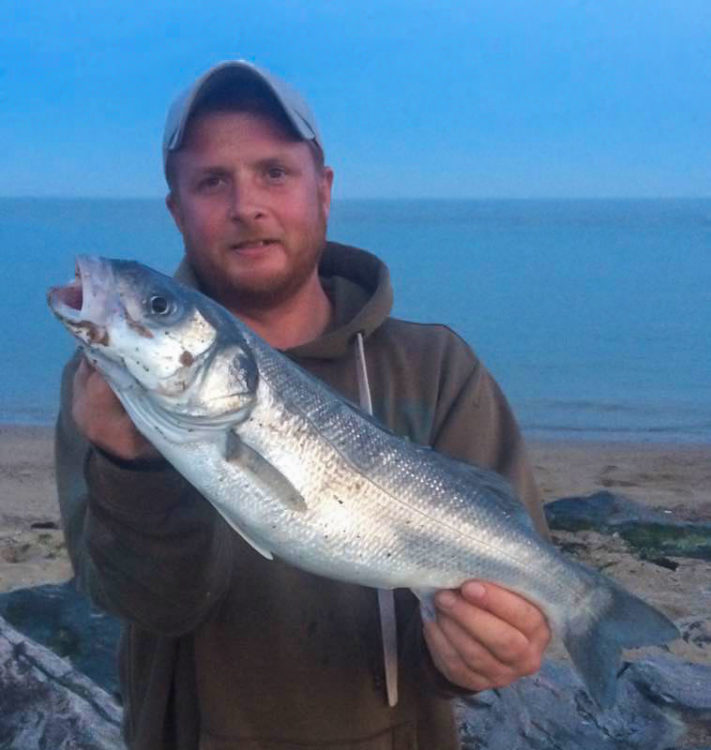 Colchester Sea Angling Club fished their latest match on Walton Pier, 17 anglers fished the June league match on in breezy conditions. The fishing was hard going for everyone, a few competitors stayed down by the club hut, while the majority headed to the top of the pier.

Bass, ray, sole, pouting, whiting, eels and gobies were caught. First on the day was Gary Hambleton fishing by the club hut with 5lb 2oz including the biggest round fish, a 3lb 2oz bass. Runner-up Olly Yallop, again fishing by the club hut, weighed in 2lb 10oz, mainly schoolie bass. In third was Martin Close fishing the top of the pier with 2lb 7oz including the biggest flat fish, a 10oz Sole.

The clubs next match is the July League fishing at Dunwich on the 22nd.

Clacton angler Matt Clark is making a habit of finding those bigger bass off the beach; he has landed three good sized fish in the same number of weeks, once again they are being caught on the evening tides when the beaches are relatively free of crowds.

Sole are also starting to show very well all along the shore from Walton to Clacton. Mark Gray and Daniel Tulip have both caught soles from this area.

Clacton Pier has also had a slow week for the bigger fish, just one or two thornback rays, even the whiting seem to have disappeared for a while. School bass can be caught with just a short cast from the head of the pier and lures will always catch a few in between the piles.

The boats have had a much better week and the Brightlingsea charter boat Sophie Lea’s monthly report was very good. Lots of tub gurnard to be caught, plenty of smooth-hounds up to around the 10lb mark. July and August will see those bigger hounds moving into the Thames Estuary and then there will be a possibility of catching a few hounds over the 20lb mark.

Plenty of thornback rays have been caught and most were released, but once again it has been a great season for them. The big shoals of school bass mixed with some mackerel have made for some great sport on light fishing tactics.

Big tope are still there to be caught, but fuel costs have made it difficult to make fishing trips viable to reach this off-shore species.