Sting In The Tail For Essex Sea Anglers

It has been another great week on our part of the coast with both shore and boat anglers reporting excellent catches.

The beaches have had to endure another week of that may-weed which clings to the angler’s line and makes fishing very difficult, the only saving grace is that it only appears when the tide is at its strongest.

I wrote last week about the imminent arrival of those hard fighting stingrays, well true to form they have arrived this week with two heavyweight rays being landed from the famous St Osyth beach. Local angler Matt Clark landed the biggest weighing in at 53lb and Craig Bradshaw caught a 43lb ray from the same venue. 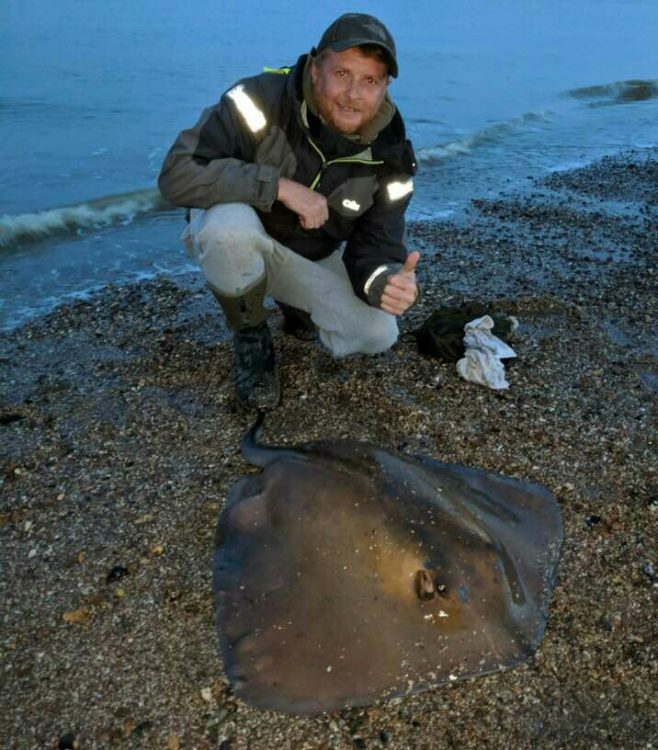 Matt Clark with his 53lb stingray

Thornback rays are also still showing well here along with school bass and a chance of a much bigger fish too. Crabs are taking the baits very quickly here now, so it’s always worth taking the tougher squid bait with you as it will give you that extra fishing time.

My trip this week was to head up the River Colne in search of bass. I fished with light tackle and small ragworm baits and over high tide. The bass were feeding voraciously I landed fish to 4lbs and lost a much bigger one.

Clacton Pier has seen thornback rays again this week although not in the numbers that we have seen previously. Bass can be seen feeding around the pier piles on calmer days and its always worth using lures such as red gills to pick out a bigger fish.

The Holland beaches have produced the odd smooth-hound this week, which is something that really hasn’t been heard of at all. One fish of over 10lbs has been landed from here this week. Still the odd ray to be caught but maximise your chances and fish after dark.

Walton Pier has seen thornback rays and smooth-hounds from the top of the pier this week, and as we go into June there is a chance of double figure hounds to appear from this venue.

The boats have had an up and down week with a keen Easterly wind stopping boats from launching. Dave Hollands and Rocky Rochelle launched their boat from the Gunfleet Boating Club ramp. Because of the choppy sea they fished only a matter of a few hundred yards out, but still managed to land some big smooth-hounds and thornback ray. 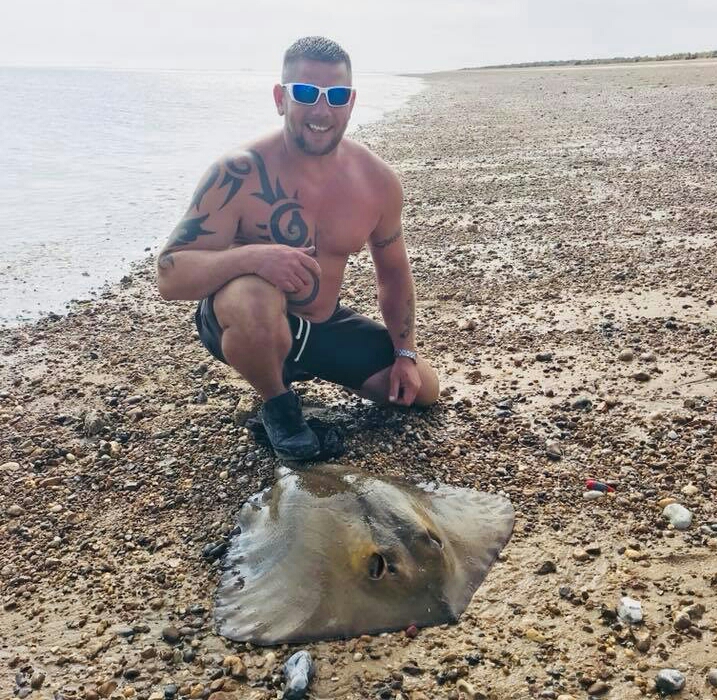 Craig Bradshaw with his 43lb stinger

Colchester Sea Angling Club headed for Suffolk to fish the Sizewell beaches. 20 anglers were greeted with bright sunshine which was to turn into rolling fog during the day!

The fishing was tough going and even some of the more experienced anglers didn’t catch! Top rod on the day was the in-form Nik Highfield who weighed in 5lb 8oz. Second place went to Steve Yallop 5lb and third Mick Bradley 4lb 4oz.

The heaviest round fish prize was shared between Nik Highfield and Steve Yallop with a 37cm bass, the heaviest flatfish prize went to Dave Clark with a 26cm turbot.