Croxton’s Dave Burr came back to form with a bang, in the latest Skegness Pier Angling Club (SPAC) match, held in perfect conditions at Trunch Lane. The annual shoals of winter whiting have now arrived in force off local beaches and Dave ran out easy winner with thirty one of the silvery species, for a total length of 1012cm. SPAC rules allow a maximum of 3 hooks on end rigs and he had five treble shots of fish during the match. Some way behind in second place was Grimsby star Adie Cooper, with twenty six whiting and a small dab for 874cm. He also won the longest round fish prize with a specimen 40cm (1lb 2oz) whiting. Corby’s Paul Marshall was going for his fourth SPAC match win on the trot, but a blank first hour cost him dear and he had to settle for third place, with twenty seven fish for 839cm. Wrangle’s Alan Steadman came in fourth, with 568cm and also won the longest flatfish prize with a 29cm flounder. 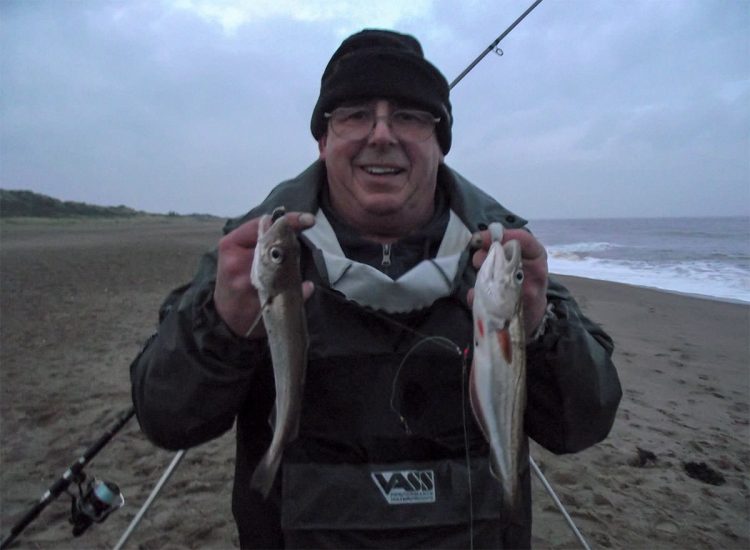 If conditions are favourable, the next SPAC match should be a cracker and will be held on Saturday 24 Oct from 2 till 6pm at Bohemia Point, Sutton on Sea, with Club members fishing for the Dutton Cup. There is also an open section, which non members are welcome to participate in. For further information please contact SPAC Secretary Chas Tibble on 07984 967988 or chastibble@hotmail.com