Skegness Pier Angling Club (SPAC) members have enjoyed a great start to the 2017 season, with some good fishing in recent matches held from local beaches. Match 1, held at Trunch Lane, saw Grimsby’s Paul Denholm win his first ever SPAC trophy, catching 26 dabs and a whiting measuring 679cm in total, to win the C Smith Cup. Not far behind in second place came his travelling companion, Ian Nelson, with a 25 fish mixed bag for 602cm. Grimsby ace Adie Cooper came in third with 12 dabs and 9 whiting, measuring 560cm. He also won the longest round fish prize with a 38cm (15oz) whiting. Skegness local Wayne Sumner took the longest flatfish prize with a 31cm (14oz) dab; he also surprised everyone by catching a 6cm stickleback, which was hooked fairly in the mouth! 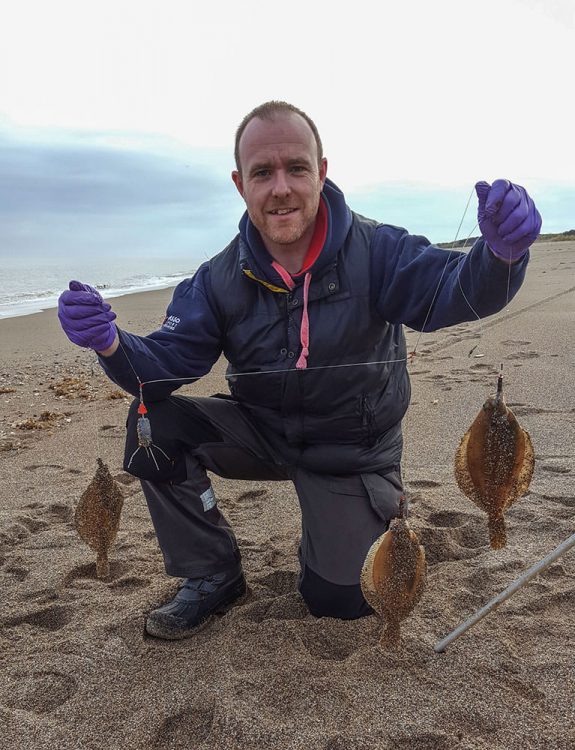 Match 2 was fished at Bohemia Point, Sutton on Sea, with Adie Cooper once again in scintillating form; winning the Coleman Cup with 10 whiting, 8 dabs and a flounder for a total length of 434cm. Just one fish behind in second place came his travelling companion Dan Jackson, with 16 whiting and 2 dabs for 418cm. Karl Nangle completed a clean sweep by Grimsby anglers, taking third place with a 15-fish mixed bag measuring 402cm. Wrangle’s Alan Steadman won the longest round fish prize with a 35cm (13oz) whiting. There was a two-way tie for the longest flatfish prize, with Dave Burr and Paul Denholm both measuring 32cm (15oz) flatties.

The SPAC AGM will be held on Saturday 4th February commencing at 7:30pm in the New Park Club, Scarborough Avenue, Skegness, PE25 2TQ. All current and prospective members are invited to attend. The annual Trophy Presentation and social event will take place immediately after the AGM, including a raffle and buffet. Any resolutions for the AGM to be passed to the Secretary by members ASAP.

The next SPAC match will be held the day after the AGM on Sunday 5th February, from 10am till 2pm at Chapel Point, with Club members fishing for the Healey Cup. There is also an open section, which non-members are welcome to participate in. For further information please contact SPAC Secretary Chas Tibble on 07984 967988 or chastibble@hotmail.com