Strong north-easterly winds over the last couple of weeks have curtailed the angling somewhat, but luckily the weekend saw the very cold wind drop to make the fishing that more pleasant for anglers including those fishing the Charity Shield.

Clacton Pier was the venue for the annual Charity Shield Match in aid of St Helena Hospice and the Dream 100 Kids Trust. Competitors lined the head of the pier and a good day was had by all with a steady stream of fish being caught from all areas. With plenty of dogfish, thornback ray and whiting being caught the entrants were kept busy. 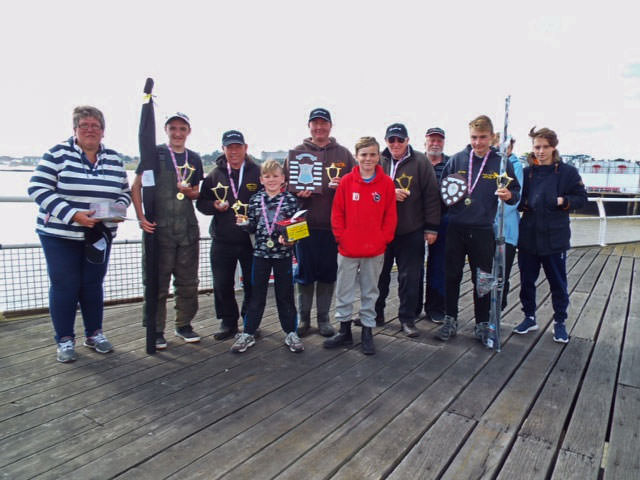 Local angler Mick Lloyd caught the heaviest fish, a fine thornback ray of 12lb 6oz. which is the biggest reported from the pier this year. Neil Cocks landed four rays, the most ever caught in this annual match.

First overall and lifting the Charity Shield was Neil Cocks with 1011 pts which included thornbacks and dogfish, second place went to Mick Lloyd with 461 pts, thornback ray and dogfish and in third place was Peter Rose on 403 pts with a dogfish catch. In the Junior section, top spot went to Olly Yallop on 110 pts, followed by Nat Mills on 104 pts and George Deakin with 81 pts. The Ladies prize went to Linda Lloyd with 171 pts. 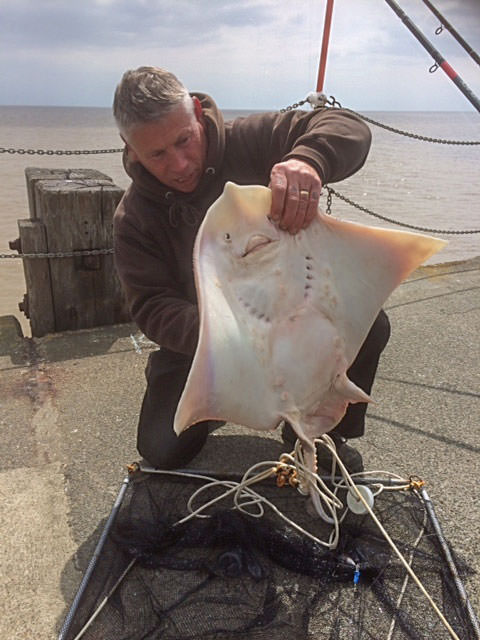 Mick Lloyd with the heaviest fish

The beaches this week have had a reasonable week with rays, some bass and dogfish showing from St Osyth, either in between the bays in front of the car park or to the right as far as the Nature Reserve. Squid and ragworm seem to be the baits that are catching the most fish here.

Reports from the Clacton and Holland beaches have been patchy, but fish are there to be caught especially on the evening tides with dogfish and ray showing to squid and bluey baits.
The Frinton beaches have seen an upsurge of dogfish after dark, and there has also been the odd bass in the 3lb range although most are schoolies between 1lb-2lbs, ragworm is the bait for bass just now.

Colchester Sea Angling Club fished the third leg of their Colchester Bait & Tackle Evening League on the Frinton beaches. The club fished either side of high tide on a dry and less windy evening.
The fishing was patchy some areas produced fish and others were hard work. Dogfish, whiting, pouting and bass were caught. First was Phil Buy with 6lb 3oz, runner-up Gary Hambleton weighed in 5lb 12oz and third placed Steve Yallop had 5lb 10oz. Five members caught dogfish of 1lb 15oz and all shared the heaviest fish prize. 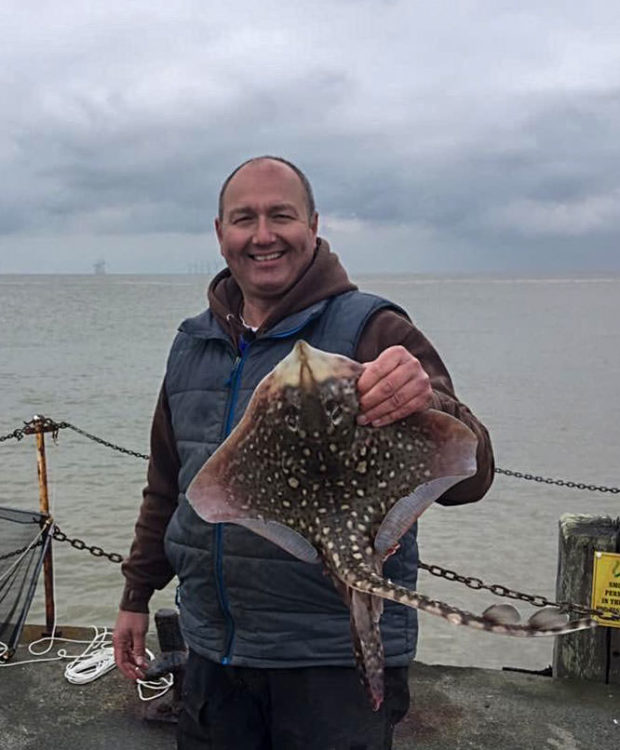 Neil Cocks with a Clacton thornback

Walton Pier has seen more bass this week Peter Hart from Sible Hedingham had a great afternoon here, he fished the top of the pier and caught bass to 2½lb and plenty of dogfish.

The boats have had a torrid time for the last couple of weeks, strong onshore winds have been the problem making launching impossible. However, a break at the end of the week saw better results with bass to 8lbs plus all boats reported thornback ray, with some into double figures. The smoothhounds are still a bit on the slow side but this is usually the way on our part of the coast. They will be here in numbers in the next couple of weeks.