Towards the end of June we had a few poor trips, with the weather not playing ball we were unable to get afloat every day and when we did the target species, smoothhounds, failed to put in an appearance in any numbers. Fortunately, both the weather and the fishing picked up and we planned to say goodbye to our annual smoothhound season, hopefully in epic fashion. The few mid-week days with suitable tides and top notch fresh peeler proved spectacular as we were treated to just short of 50 double-figure hounds, including two over 20lb and many others in the 8lb bracket. 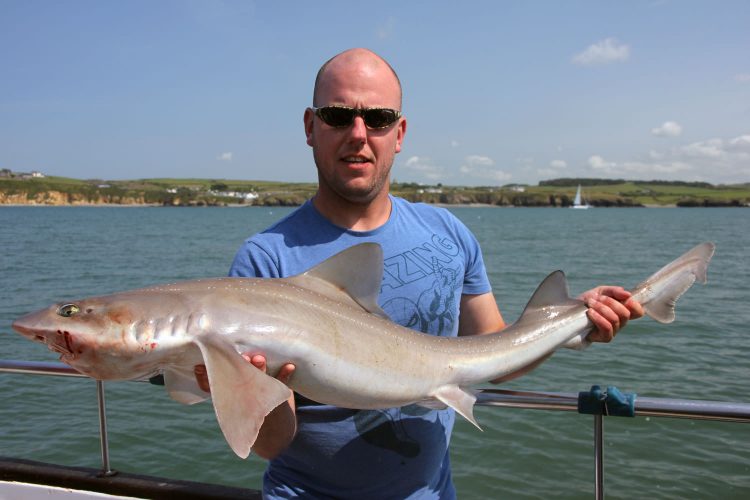 Both 20lb fish fell to anglers having a play around with the Yuki Manacor rod from Moonfleet Angling in Gateshead. This four-piece senor-tip rod comes complete with four interchangeable tip sections, rated at 1, 2, 3 and 4 oz. Primarily aimed at smaller species that require delicate bite detection this rod is equally at home when targeting powerful and hard fighting smoothhounds. Graham is pictured above with his a new personal best fish of 22lb 10 oz, beating his previous best by 7oz which was also caught aboard My Way in 2012.

Inshore the fishing was also improving, at anchor a variety of species were helping the anglers build some great mixed bags. Many ticking off a whole host of species required for personal and club species hunts. The wrasse that had been missing for what seemed an eternity finally started to arrive in numbers through July; nothing too big at the moment but a fairly plentiful amount of both ballans and cuckoos for most anglers to catch along with the odd corkwing and goldsinney. 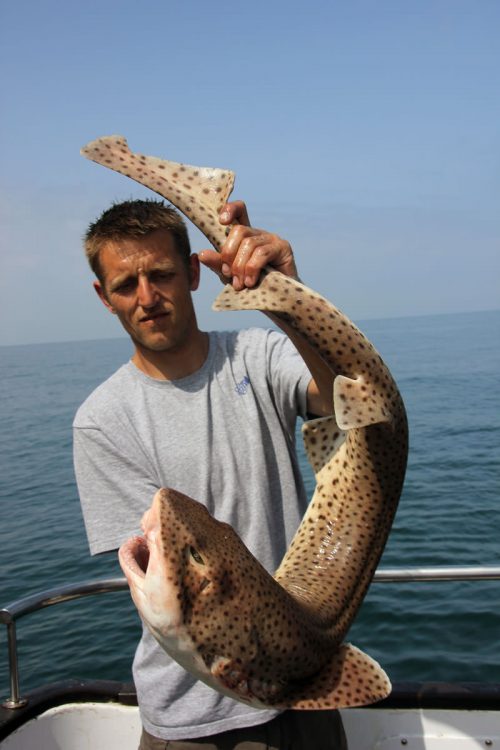 In July, we set in motion a new competition for anglers aboard My Way – a tackle give away. With sponsorship from Tronixpro we have four HTO lure game rods, 2x25grm and 2x50grm, all coupled with Daiwa Megaforce FS reels up for grabs over coming months. These rods are free to use aboard My Way when on the drift for the likes of pollack and wrasse or at anchor for a variety species. Initially the only requirement was that the angler baits up from a selection of Isome lures as supplied by the sponsors. Photographs uploaded to our Facebook group during each month between July and October would enter the anglers in a draw for a rod and reel combo. However, with the slowness of the fishing for wrasse and mini-species this year it was decided to allow anglers to use either Isome or bait, provided they catch using the HTO Lure rods.

I reported last month on some of the superb fishing we had experienced in Holyhead Deep, with double figure pollack over the wrecks, along with huss, spurdogs and small tope. Hopes were high that July was going to see a continuation of this trend. Again the weather gods scuppered plans for several bookings but when we did get out to the favoured marks we were treated to some great fishing, both on the drift and at anchor.

The pollack fishing was tough on occasions and while we caught on most drifts there were only one or two fish on each pass. On gutting the catch for the dinner table, it was apparent that the pollack were preoccupied on feeding on the shoals of sandeel and were stuffed with baitfish before we arrived. Bites were delicate as the pollack seemed only to snatch at our lures as they passed their heads, the pollack never really chased the lures or hit them hard in any feeding frenzy.

At anchor, the fishing was more hectic with everyone looking to target a member of the shark family either huss, tope or spurdog. Without doubt, the most prolific were the spurdog, the vast majority of specimens going well into double figures. Simon Coyne from Manchester bagged a fantastic spur of 19lb, just under the Welsh record.

Our biggest huss for a few years fell to local rod Dave Craddock who landed and then made a great attempt to get to grips with this monstrous 17lb 1oz bully.

Fact is we have had some great fishing around our small part of north Wales over the past few weeks, thanks to everyone who helped make it fun, and cross fingers for some more great fishing to come. 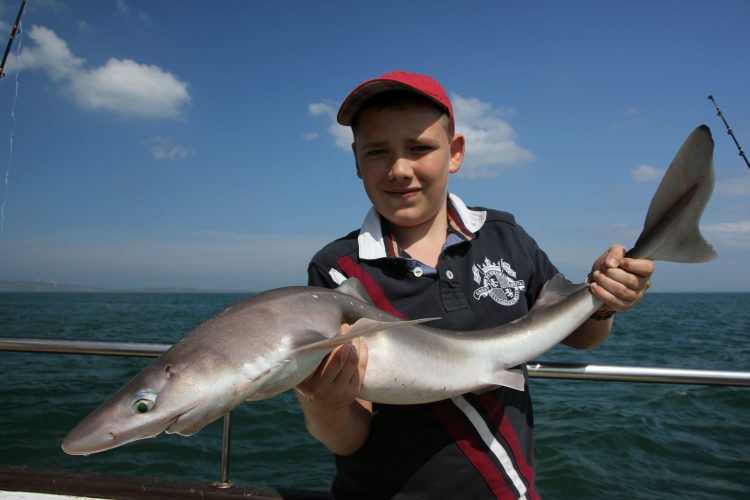