Some nice settled weather in the middle of June saw us joined aboard My Way by a group of lads from Shropshire. The group had been fishing only a handful of times previously and were now keen to sample some of the fishing that Holyhead had to offer but in particular to chase the smoothhound.

Conditions were not perfect for the hounds with late June being a little hit & miss for hounds in any great number. The day started at anchor for a spot of general fishing and the lads earned their stripes catching dogs, whiting, codling, gurnards and dabs two and three at a time. The odd bull huss and a couple small spotted rays also joined the fray. Once the tide had changed everyone switched gear to target the hounds with a single hook running ledger loaded with prime fresh peeler crab, the number one bait locally.

It wasn’t long before we had the first run and after a tense 15 minute battle the lads saw the first quality double figure smoothhound netted at the side of the boat. The crew managed a few hounds during the couple of hours we fished for them with trip organiser Steve also getting in on the act with an 11lb specimen. 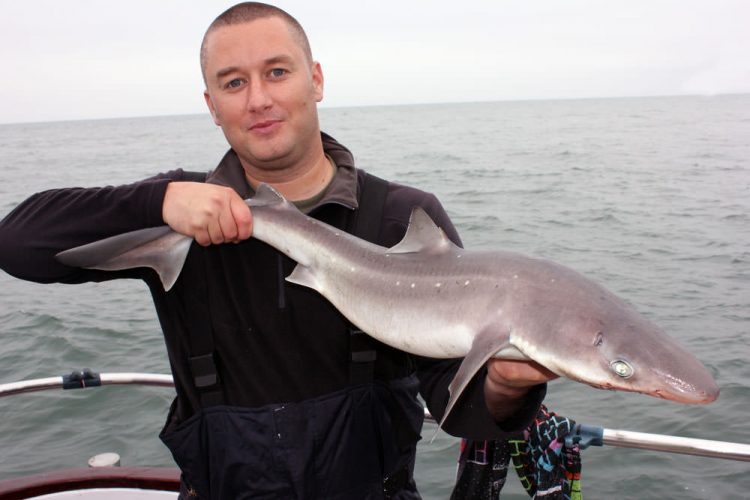 With Holyhead Marina not being tidal we are able to sail whatever time of day suits the anglers best, and take advantage of the prime tide times to help ensure a productive day. Most of our sail times range between 8 and 10am. One morning though a nice an early 7am sail was required, to allow us to make the low water slack out in Holyhead Deep. We could have sailed a little later and steamed straight to our chosen mark, but decided to break the journey down with an earlier sail and a fish for wrasse, pollack and mackerel along the way.

With the potential of only catching double figure fish Holyhead Deep is a great draw for many anglers. Huss, spurdog and tope are the usual suspects and it is always recommended that everyone tackles up on the big side, and goes all out to land these specimen members of the shark family. Although there are other species to be had, whiting, dogs and grey gurnards the most prolific, these are generally prolific inshore so there is little point in missing out on the best of the tides on the smaller fish.

We had two groups of individuals and regulars aboard My Way; Graham with family and friends from Chester and Dave with fishing colleagues from Urmston Sea Anglers. No one was to leave disappointed with the quality of the fishing they were to experience, with double figure bull huss and spurdogs, averaging 12lb, coming to the side of the boat with regularity. You know the fishing is excellent and hectic when spurs approaching 14lb are being T-barred at the side of the boat with no call for the scales to check for a personal best. 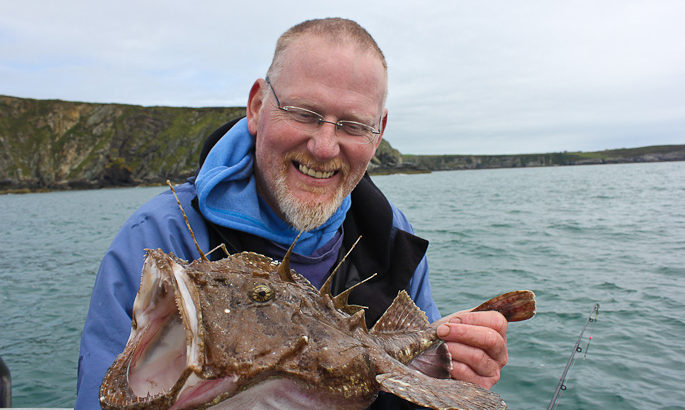 Following the Streaked Gurnard featured in our last report, I didn’t think we’d have another first aboard My Way for a long while, but I was proved wrong by Scottish International angler George Bell. While drifting under the cliffs of South Stack lighthouse George hooked into what could only be best described as a dead weight, calls of octopus and rock echoed around the boat until George’s catch broke the surface. It proved to be an anglerfish a species normally found in much deeper and colder water; this fish, weighing at around 3lb, was certainly lost at sea. 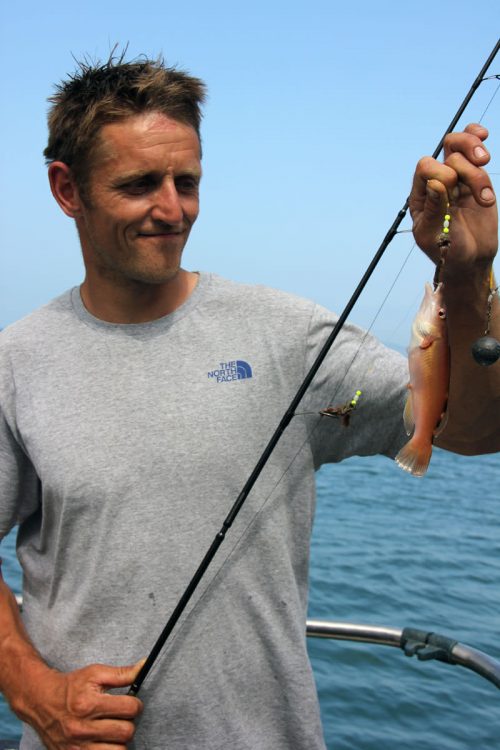 The general fishing around Holyhead and Trearddur Bays has been improving when the weather conditions permit. Fishing on the drift has seen plenty of ballan wrasse and small pollack, and with the ballan wrasse average size increasing some excellent sport can be had on light gear. As we reach August and into September four to five pound wrasse will start to show. Mackerel are as patchy as ever and nowhere near as reliable as we would like them to be. We managed the first of the black bream of the year recently for Stevie from Melthan & District SAC. We don’t get many through the year from Holyhead and most average at only 1lb in weight, never the less they are a welcome sight and especially for Steve who was fishing the clubs match and received additional points for the species.

To target rays with any form of consistency requires a good steam around the coast to popular marks such as Rhosneigr and Ty Croes. However most trips into the local bays lately are seeing anglers land rays on a regular basis, with some days producing a dozen rays aboard the boat. Small spotted rays are the most abundant with some thornbacks and blonde rays making up the catches.

Other species making regular appearances include the ever present dogfish, along with whiting, codling, grey, red and tub gurnards plus many more including bull huss ranging from 8oz to 14lb in weight. Some of the rougher inshore marks are throwing up congers, averaging 15lb in weight.