With bigger high tides in the afternoon this week it was always going to be a good week for cod and thornback rays and so it proved with beaches, boats and piers fishing very well.

The Walton Pier Club held their Secret Pairs Match on the local pier. The idea is that competitors are paired up together to fish the match, but neither anglers know until the match has finished as to who their partner is, which makes things very interesting. 20 anglers turned up for the match, and conditions were good, with a blustery wind and a coloured sea. The fish were feeding and an incredible 200 were landed.

Heaviest fish – Barry Adair with a cod of 6lb 4oz

The pier in general has had a fairly good week, although on calmer days those bigger codling disappear, however, there are still rays to be caught. 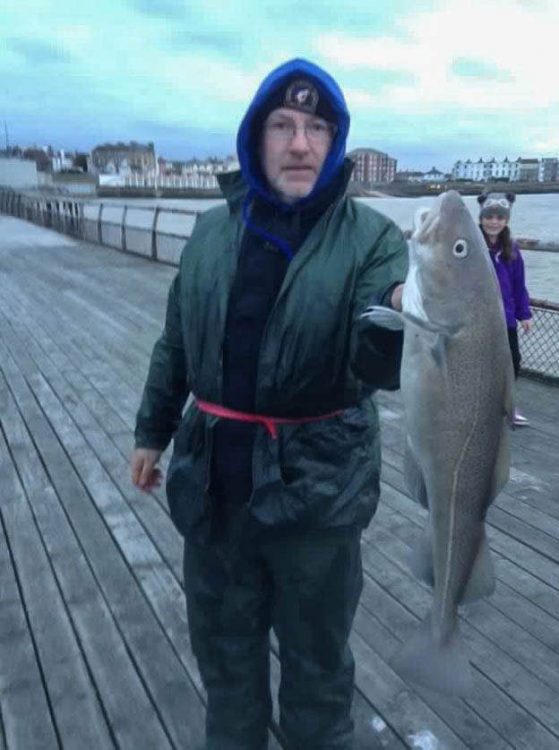 Walton Sea Angling Club also fished the local pier for their latest evening match. They fished an in-coming tide from low water and there were lots of whiting to be caught, plus pouting, dogfish and dabs making up the catch, with surprisingly only one codling caught. In 1st place was Dave Collet with 9lb 1oz, close 2nd Rob Tuck 9lb and 3rd spot Bill Paquette with 6lb 13oz.Heaviest fish – Dave Collett with a 3lb 13oz codling.

The Holland and Clacton beaches have come into their own this week with rays and some of those bigger codling caught. One problem that has been highlighted this week is the amount of weed that is still causing trouble to anglers, but as temperatures gradually cool this problem should disappear.

Clacton Pier has had a bumper week with rays and some bumper size codling being caught.

Colchester Sea Angling Club held their annual Beach Championships on the Holland beaches and with high tide at mid-day there was always going to be fish to be caught, although hungry crabs were a problem stripping bait from the hooks very quickly. 1st was Dave Clark weighing in 8lb 4oz, 2nd Mark Peters 5lb 8oz and 3rd Phil Buy with 3lb 10oz. Heaviest fish Dave Clark with a 3lb 10oz codling.

St Osyth beach has had a quiet week with whiting and the odd thornback ray being caught.

The boats this week are reporting codling and thornbacks. Lester Baker, skipper of the Brightlingsea based Seawatch Charters, reported cod to 6lbs, with up to 30 fish per day plus thornback rays, although those massive shoals of whiting seem to be thinning out.

Shore Fishing UK will be running a two day match in aid of Diabetes UK on November 14th& 15th fishing from the beaches stretching between Clacton Pier and Walton Pier. There will be thousands of pounds worth of prizes up for grabs, and anglers will be arriving from all over the country. A top prize of a fishing holiday in Iceland is up for grabs.

It will be all based around Valley Farm Caravan site in Clacton where the weekend’s events will happen and on the Saturday night there will be a bar and music for the anglers and their friends.

If you want to book a caravan for that weekend you can contact the site on 01255 426096 where there will be discounted accommodation available. You can also find more information on the Shore Fishing UK Facebook page.