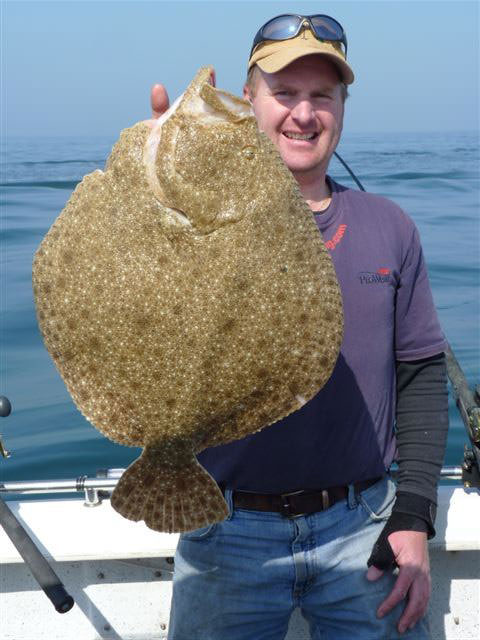 It’s a brief report this month because there is only so much you can say about turbot fishing……………it’s been excellent lately. The best we’ve seen around the island has for three years and the sports looks set to continue as the banks continue to produce top notch catches. Lets face it turbot fishing can be boring yet the lure of such a prized fish is enough to get the appetites whetted to drift over the banks and gulleys in search of the specimen that all anglers are seeking.

The fight can at best only be described as dogged but it is the satisfaction of seeing something considered rare in UK waters gliding its way to the net. Having said hooked into a double figure fish on light tackle the angler will know all about it. The shakes of the head like any other flattie as the turbot attempts to stick to the seabed produces many heart stopping moments during the fight. Plenty of reports of twenty fish to a boat with Steve Porter’s “True Blue” and Chris Tett’s “Peace and Plenty” producing record catches for their boats during recent weeks.

The conservation message is getting across to with many fish going back to breed and fight another day; it’s the only way that the fishery will remain sustainable. No twenty pound plus fish reported to me yet (doesn’t mean they’ve not been caught!) but the average size is pretty good with plenty of low teen fish. One or two brill have also featured in the catches although they tend to come on better later in the season. Blonde rays have been caught when the tide slackens and I have no doubt that if the banks were anchored correctly the angler would have a field day with those but such is the draw of the turbot it rarely happens. The angler hunting the flats will have to contend with one or two nuisance lesser spotted dogfish during their drifts.

Lots of tope activity on the reef marks together with the odd conger eel and bull huss. The tope are ranging in the 25lb to 45lb bracket with the occasional fish topping 50lb, exhilarating sport on the right gear. On the wrecks there are plenty of pollack to 18lb and these marks aren’t far offshore, just a mere 8 miles to the closest ones in Hurds Deep. A sprinkling of cod are also showing and these will increase in numbers over the coming weeks. Slack water over the wrecks is producing some decent ling.

Shore sport is going through a quieter period at the moment with pollack to 4lb, garfish and the first of the mackerel showing up. One or two bass reported but lots of fishless hours have been put in for these few fish and the mullet, which were here in numbers, have moved off for now. All in all rather typical for the time of year.

Meetings regarding Alderney’s proposed fishery regulations are on going at present and thanks to those that have contributed their comments.

Also thanks to those of you that make the effort to get here to sample our delightful fishing. It’s not always easy crossing the channel in windy conditions but your efforts are appreciated by those involved in the island’s tourism and the fishing is worth your endeavours.